(Data was taken and slightly edited from an open sourced time series dataset.)

Kitty, do you remember that hooman told you about the components and stationarity (here) of a time series the other day? Of course you do, but you do not remember hooman telling you how to surely detect if a time series is stationary or not.

First you load data from the csv file. 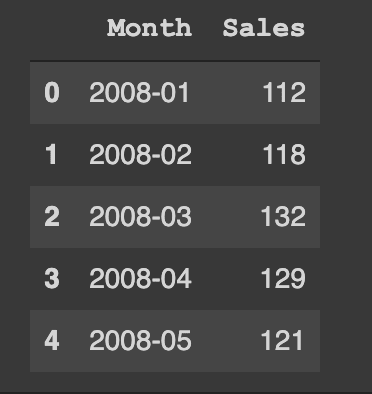 Now hooman says he is going to ‘test’ the stationarity using a method named ADF test, also known as Augmented Dickey Fuller test. Hoomans named Dickey and Fuller found this method where they check something named ‘p-value’. This p-value is like a judge of your ADF test. The higher his value is, the more he supports your null hypothesis. If the value is lower than 0.05, it speaks against your hypothesis, that means whatever you believed at first is not true.

Hooman gets the output:

You see, your ADF test says your data is not stationary. What do you do now?

To make a series stationary, at first try to remember when or why a time series becomes non stationary. If you remember the diagrams hooman has shown you on the 4th part of your data science journey, after you plotted the data, there were repeated similar looking fragments that kept going upwards as we had an upward trend. You can say that trend is the reason why your data gets distributed in so many different levels.

A nice way to stationarize a time series is to shift your time series a bit and to compare it with your original series. By shifting, hooman means introducing a delay, and you will be calling this delay ‘LAG’. For example, what if your data started after one month of delay?

You want to see how your data looks like after shifts. 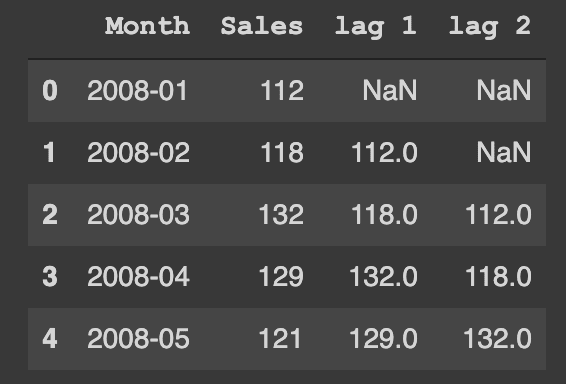 Hooman tries to plot your data, and a 5 month delayed data in the same graph and observe how it looks. 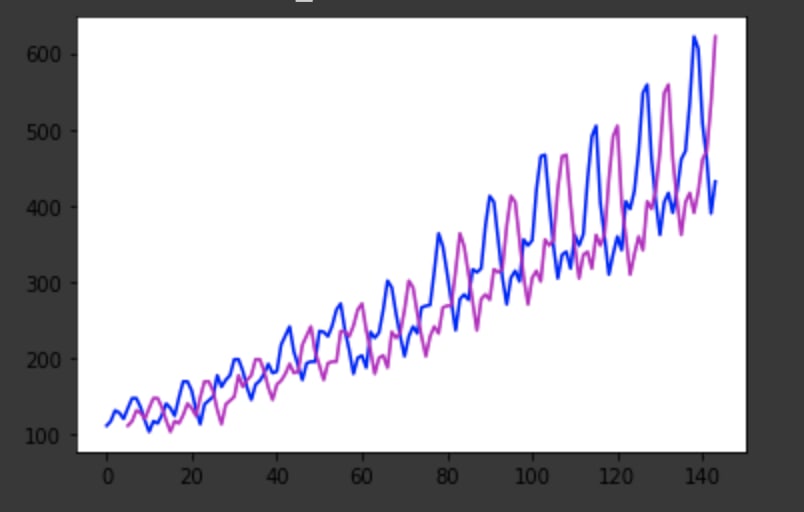 Here, blue is your original data, and magenta is the data with a delay of 5 units (in your case, months).

Hooman says that if you plot the difference of your data and 1 unit lagged data, there is a good chance that it will become stationary. Now what is this difference?

Hooman now checks if the first difference is stationary.

The p-value now becomes 0.03862975767698862, which indicates that the data is definitely stationary. So you need to take the second difference to stationarize the data?

Well, actually no. Now you are confused. Hooman now asks you to have a closer look at the p-values of your first and second difference ADF result. In case of first difference, the p-value is almost 0.05, and the difference between 0.054213290283824704 and 0.05 is totally insignificant. So you can say that the first difference has made your data almost stationary. If you take the second difference in such cases where the first difference makes the data almost stationary, there is a chance that your data becomes over stationarized, which will later not give you a good forecast. If you have any confusion, you can cross check the value using some other stationarity check method, such as KPSS. Hooman says that you have to remember this term as ‘order of differencing’, or simply as ‘d’. If you had to take the 99th difference to get a stationary time series, your d value would have been 99. In this case, your d value is simply 1.

There is another method you can try to confirm your d value. You have to plot the correlation between a time series, and a lagged version of it and observe the output. Hooman calls such correlations ‘AUTOCORRELATION’. It usually decays, so if the output curve immediately approaches 0,we can assume that the difference between the series and that lagged version is stationary. 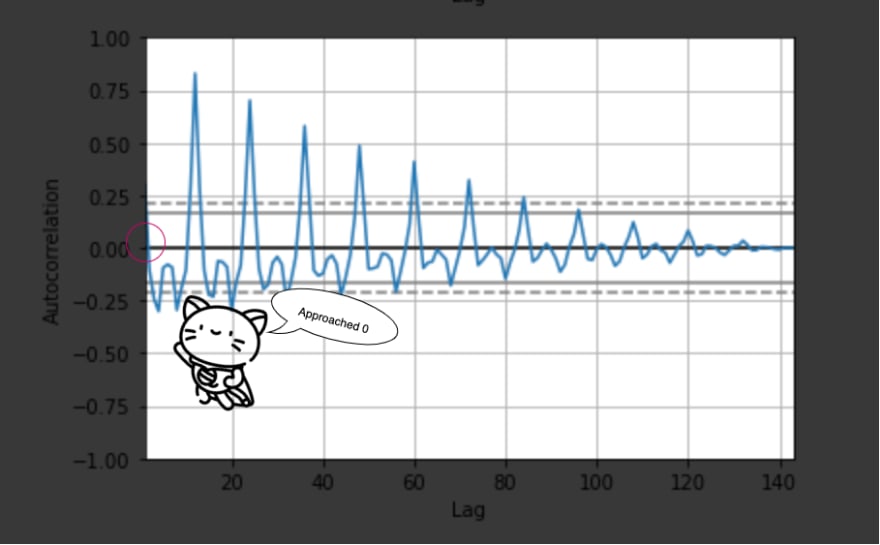 Hooman will be forecasting this data using a model named ‘ARIMA’, Auto Regressive Integrated Moving Average. You need to know 3 values to tune this model, and you already know one of them, the d value.

The first term is ‘AUTOREGRESSIVE’, which has two parts, auto, and regressive. You already know about regression from your previous conversations with hooman. Hooman says, auto means something like ‘with yourself’. So you can say, autoregression is the event where the lagged values of your data have an impact on your current values. AR(x) means x number of lagged terms will have impact on your current data. On the other hand, the ‘MOVING AVERAGE’ term removes the randomness from your data. MA(x) means you are taking x previous observations to understand your current data.

Now how do you calculate these AR (or p) and MA (or q) terms? Hooman explains the AR term calculations first. You need to plot a ‘Partial Autocorrelation Function’ or ‘PACF’ to find out the AR terms. PACF? What’s that? Hooman says, in PACF, you take each of the lagged values of your series, find the residuals by removing the effects that are explained by the lags and find a ‘partial’ correlation.

Hooman is not sure how many bars crossed the blue zone after 0. Could be 1 or 2. So out AR value would be either 1 or 2.

Hooman similarly calculated the MA value from this graph. It could be 3 or 4.

Take the first combination, use that to fit in an ARIMA model, and then calculate summary like this:

There will be an ‘AIC’ term in the output. AIC means Akaike Information Criterion, which estimates how good your model is. The lower the value, the better the model is. 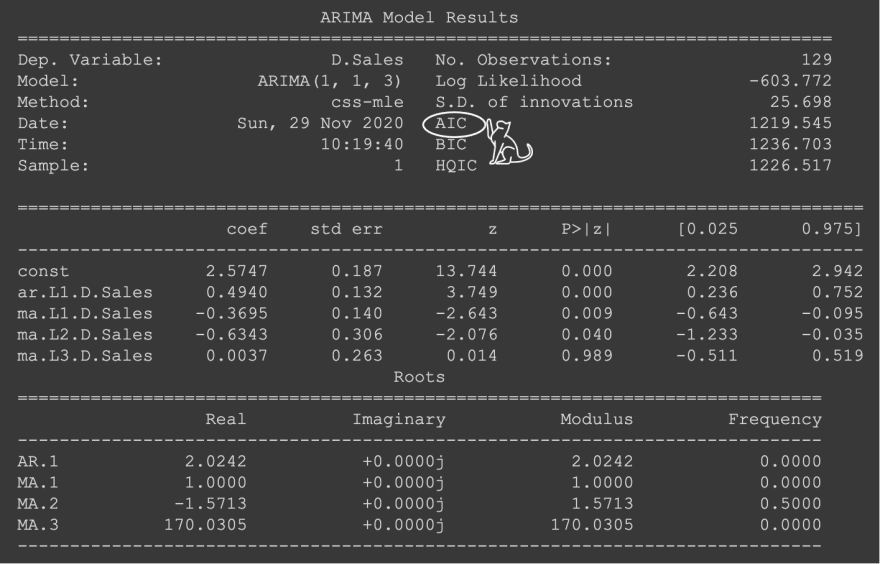 You see, the model with order (2, 1, 4) gives the best result. Hooman now tries to plot the data.

The more data you have, the better the answer will be.

Now you have your sales forecast!

A program to introduce Web Monetization to everyone