Electron is a framework for creating native applications with web technologies like JavaScript, HTML, and CSS, which basically means that if you know how to code a website, you can easily create desktop apps!
Now getting started with Electron can be quite tedious, which is why I'm going to explain how to get started in a few steps.

What you need to get started

To develop desktop apps using Electron, I personally use Visual Studio Code, but most code editors that have a terminal included should work.
You'll also need to install the NodeJS runtime.

Setting up your project

Now that you've got the right tools, let's get started setting up the project. To do so, you'll have to create a folder containing your project, and then open that folder using your code editor (VSCode in my case).
Then open up a new terminal window inside your code editor. Here's how it's done in VSCode: 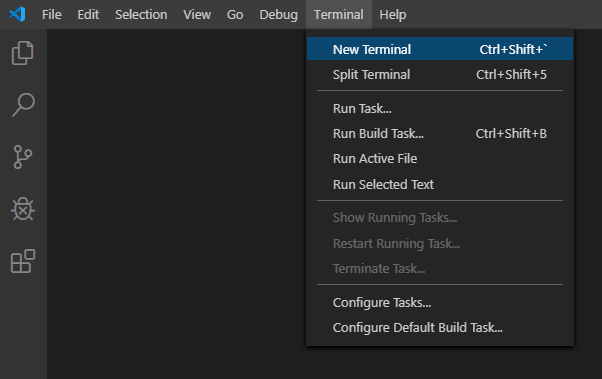 Then type in npm init. This will setup your package.json file.
You'll have to enter the following information:

The remaining fields are just some information for when you'll publish your project on npmjs. I'll leave all those fields empty for now.

Once you confirm, a file called package.json will be created.
It should resemble something like this: 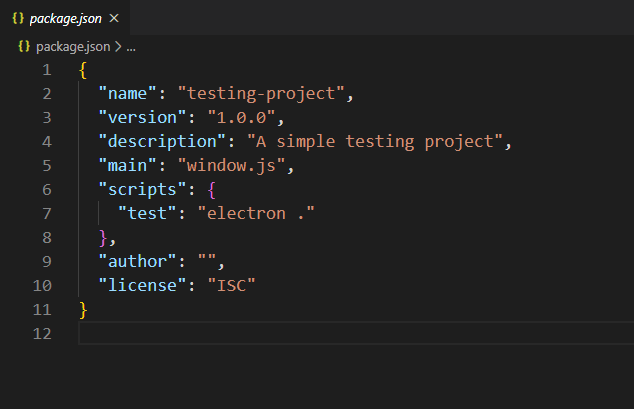 Notice the script object, containing test which has the value of electron ., which means running npm test will execute your project. You can add other scripts there, such as the start script. More about that here.

And to finish setting up your project, you'll have to install electron using npm. This is very easy, as all you have to do is type npm install electron in the terminal window.
Note that a package-lock.json file is created, but you don't have to worry about it.

Now that everything is set up, we can start coding! Let's begin by creating the window.js file, that will handle our app's windows.
Right click in the file explorer, and hit "New file". Remember, you have to name it as the entry point of your project in order to execute it when launching your app!

Then I'll asign a function to the "ready" event using the app.on function. It will be triggered when the app is launched, and inside of it i'll set up the mainWindow variable with some options defining the size in pixels of the window.
Here is a list of all the available options.

Still inside the app.on function, I'll add the following code to handle closing the window:

And finally, still inside the app.on function, I'll add the following line, to display an HTML file named index.html:

Notice how __dirname is used in order to reference the current directory.

Now let's create the HTML file that is going to be displayed in the window. Right click in the file explorer and hit "New file". I'll name mine index.html.

Inside it i'll just write a basic web page:

Now you can just type npm test in the terminal, and you should see the HTML file appearing!

And now it's up to you to create your app! Because we're using NodeJS and Electron, you have the simplicity of creating websites combined with the power of Node. You can install modules from npmjs or use the preinstalled ones to extend the capabilities of your project! For example, the preinstalled Filesystem module let's you interact with locally stored files directly in JavaScript, which is great!
If you don't know what to create, here are some apps made using electron, from which you can inspire yourself.

Once suspended, oskarcodes will not be able to comment or publish posts until their suspension is removed.

Once unsuspended, oskarcodes will be able to comment and publish posts again.

Once unpublished, all posts by oskarcodes will become hidden and only accessible to themselves.

If oskarcodes is not suspended, they can still re-publish their posts from their dashboard.

Once unpublished, this post will become invisible to the public and only accessible to Oskar Codes.

Thanks for keeping DEV Community 👩‍💻👨‍💻 safe. Here is what you can do to flag oskarcodes:

Unflagging oskarcodes will restore default visibility to their posts.