Flutter is a Dart-based toolkit that helps you build the front end of your apps. It really shines in cross-platform mobile app development and aims to be a viable option for web and desktop as well.

In its mobile app flavor, Flutter provides many UI abstractions to build interfaces. You can implement logic in Dart, or directly with Kotlin or Swift if you need more specific interactions with your OS of choice.

While cross-platform app development is nothing new, earlier strategies such as PhoneGap and Ionic used the available WebView implementation instead of interfacing directly with the system. This is not only very limiting but also has a lot of performance costs.

The gold standard for native cross-platform app development is yet to be established. But Flutter both offers a a lot on its own and elegantly steps out of the way when you need to interact directly with the OS using whatever official language you need to use.

This makes Flutter a game changer even before it has fulfilled its potential of sharing the same codebase with the web and desktop versions of an app.

In this tutorial we'll get to setup an Ubuntu 16.04+ machine for Android app development with Flutter. You can also edit Swift code directly from Android Studio, but unfortunately you won't have official support to test the app in iOS devices or emulators due to Apple's policies.

First things first: let's install flutter through the snap store. If you are using Ubuntu 16.04 onwards, you likely already have the snap command installed; if you are not, you can follow the instructions available for your distro at the "Install Snap Store on your Linux distribution" section on this page.

After flutter has finished installing, run a basic checkup which will also perform some automatic configuring: 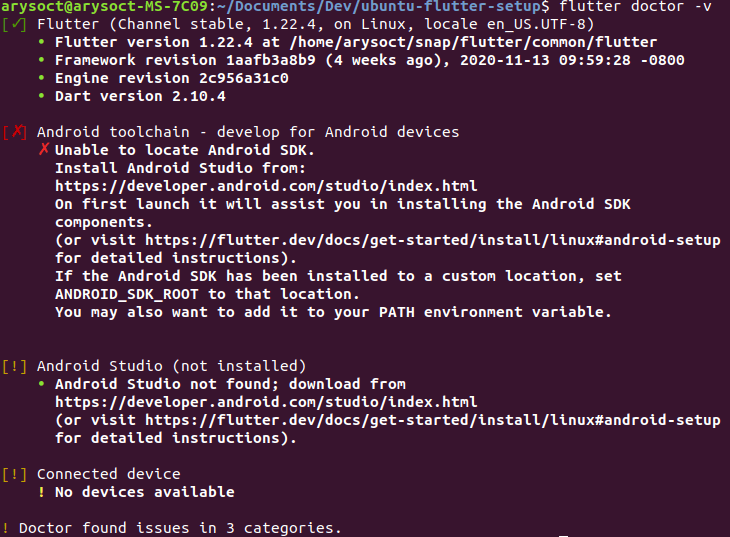 Flutter has been installed, nice!

First of all, we need to get the (community-backed) Open Java Development Kit before being able to use Android Studio. To get the latest stable verion of Java 8 (other versions can sometimes show some unpredictable problems while working alongside Flutter as of May 2021, so I recommend installing OpenJDK 8; don't worry, OpenJDK 8 is set to receive support at least until 2024), open your terminal and run:

After a successful installation, it is time to set the $JAVA_HOME environment variable, used by default by many applications which interact with your local java installation, Android Studio among them. Get a list of the currently installed JDKs in your system:

Choose from the list of locally installed versions (remember that Java 8 is the easiest to use with Flutter) the one which you would like to be the system's default and set $JAVA_HOME to its path, without including the /bin portion onwards of the path (in my case for instance the correct path was /usr/lib/jvm/java-8-openjdk-amd64):

After your download finishes, extract the Android Studio package into the /usr/local/ directory:

This should pop up the install wizard. Follow the wizard's instructions for the standard installation and you should eventually arrive at the starter screen. Select Configurations at the lower right corner and click on "Plugins": 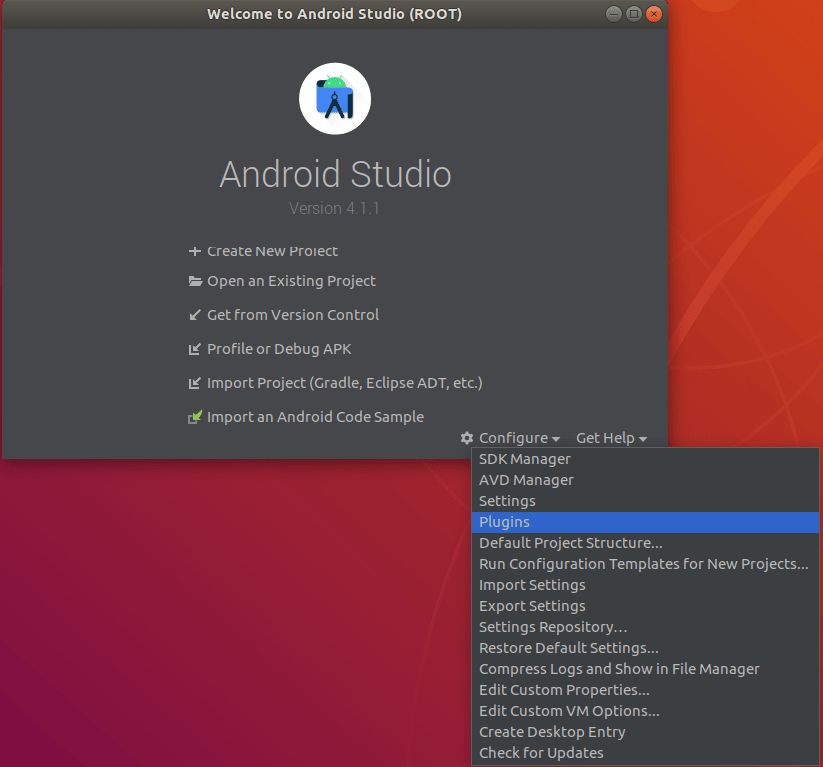 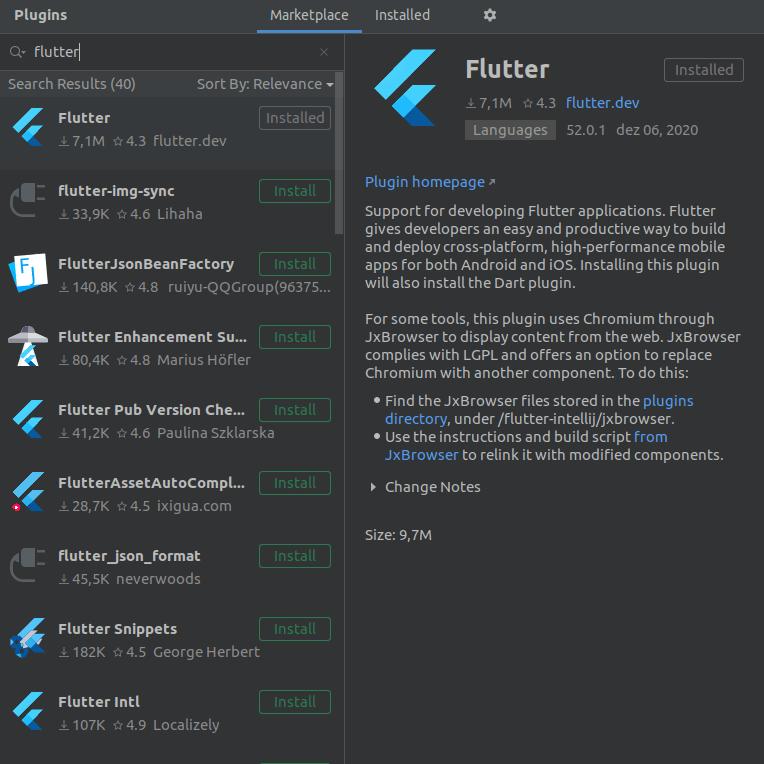 You will be prompted to install the Dart plugin (Flutter's base programming language) before proceeding. Click 'Ok' and restart the Android Studio IDE. The option to start a Flutter project should be visible now; click on it, then select 'Flutter Application' and click on 'Next'.

You should be greeted by the project configuration screen. Configure your project's name, location and description as you wish, and point the field "Flutter SDK" to /home/<your_user_name>/snap/flutter/common/flutter: 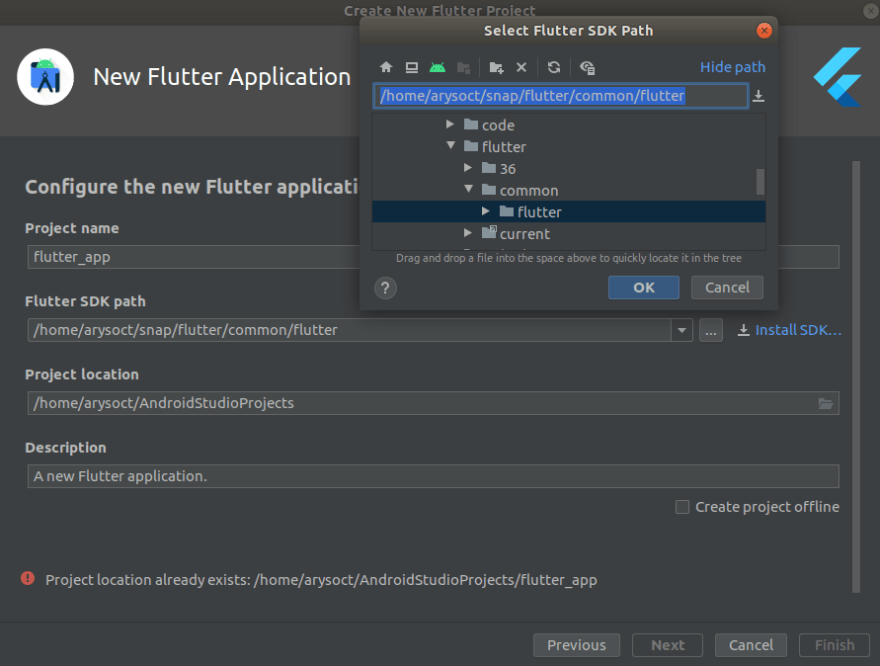 In case the above path is not available, open a terminal and run:

You should then be greeted with the starter project screen: 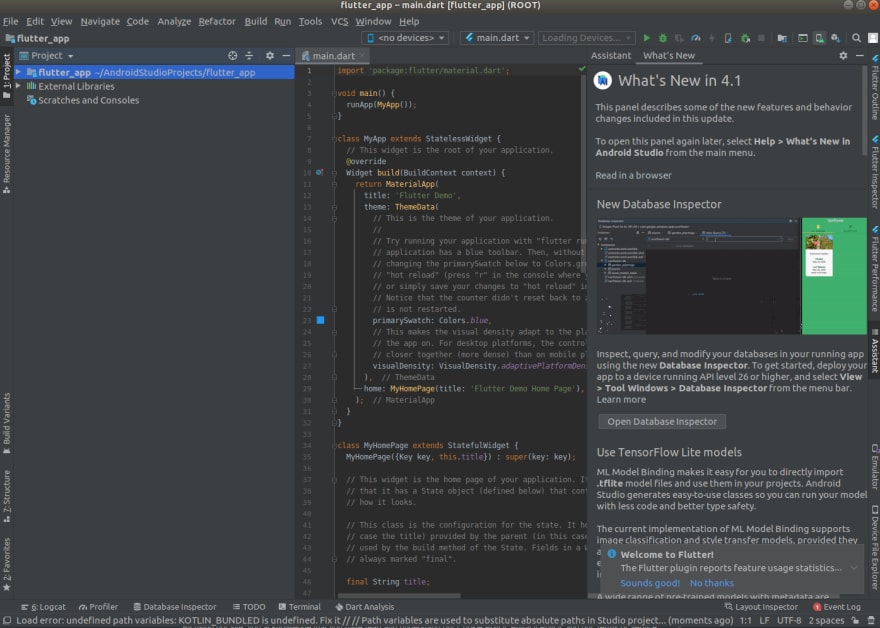 Almost done, now you need to accept the android licenses and double check your flutter installation's ownership in order to avoid future surprise build errors due to resources denied for Android Studio. Open up your terminal and run: 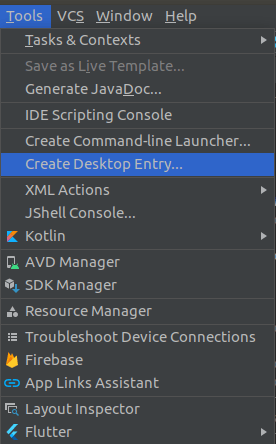 The Android Studio shortcut should be available from the "Activities" menu now.

In order to run the emulator, we must first set up your CPU's hardware virtualization capabilities.

Run kvm-ok in your terminal and your output should indicate whether KVM acceleration can be used or not (Kernel Virtual Machine, in a nutshell it is a bridge between the kernel with virtual devices which allows a virtual device to emulate its own hardware directly from the host computer's hardware, take a look here for more detailed information); if you have an AMD or Intel CPU, most likely it can.

Provided you are indeed able to use KVM acceleration, it is time to setup KVM and authorize the current user for it:

And restart your user session. In the computer, not only the terminal. Log off the system and then login or reboot the PC already, I'll be waiting.

Click on the "Create Virtual Device" button and a window with a list of devices should pop up, with the 'Phone' category preselected; I recommend you pick a device with Play Store enabled just in case you might want to use it later inside your emulated device. Mine was the Nexus 5.

First, download your target image (by simply clicking on 'Download' right beside the Release Name), select a locally downloaded image and click on 'Next', which should only be highlighted after the image was successfully downloaded.

A window will then show up, offering you to customize your virtual device's properties such as screen orientation on startup, RAM usage, etc. Tweak the device to your possibilities should you like to do so, otherwise you can safely click on 'Finish'.

If everything goes well, you should now see your device listed at the Android Virtual Device Manager window: 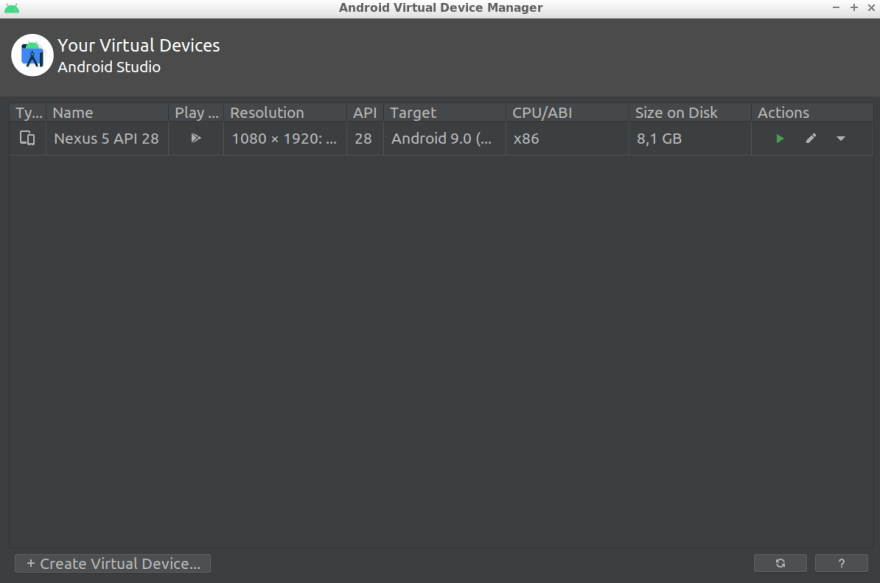 Go back to your Android Studio project view; at the same line where the 'AVD Manager' button is located, there is a dropdown list of available devices just to the left of 'main.dart'. Select the emulator you have just set up and click the green 'play' button just to the right of 'main.dart'. In case the emulator is not listed there yet, open the AVD Manager window again and click the green 'play' button under the 'actions' label listed for your virtual device to load and open the emulator before running your Flutter code. 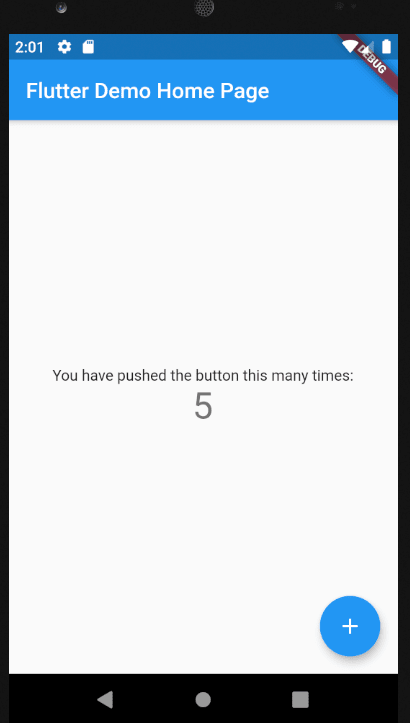 Notice that 'debug' ribbon in the upper right corner? In case you wanna get rid of it, add debugShowCheckedModeBanner: false as a field of MaterialApp.

You'll need to have a local installation of the Android Debug Bridge in order to enable your computer to trade information (such as APK builds) with any connected Android devices, virtual or otherwise.

The ADB consists of a client (the interface from which you run commands, which will be the ADB binary installed in your computer for all purposes of this tutorial), a daemon (which executes in the Android device the commands initially sent from the client) and a server (which runs locally in the PC, which has a default listening location at tcp://localhost:5037, and intermediates the communication between the client and the daemon).

After running adb devices, you most likely got an error. This error has registered the $LOGNAME variable which contains the current user name, you will use it to insert your user into the plugdev group, in case you are not there already. You also most likely do not have a set of udev rules for android devices; UDEV rule files specify Ubuntu interactions with plugged in devices, and Ubuntu will refuse to perform certain interactions with your Android device unless it is previously authorized in an UDEV rules file. So, let's correct there errors:

Reboot your current Linux user session to apply these changes, then open a terminal and run adb devices again. In case you still have a UDEV-related error, your device's manufacturer ID probably is not listed in /etc/udev/rules.d/51-android.rules; in this case, look the internet for your device's manufacturer UDEV id and manually add it to the rule list in the same format as the others. Notice how the only field with an unique value amongst the rows is ATTR{idVendor}. If you do not receive any error, you'll notice that your device is listed as 'unauthorized'. Let's unlock the device for USB debugging.

In your android device, open up 'Settings', then 'About Phone'; tap your 'Build number' 5-6 times until a toast telling that 'You are now a developer!' pops up. 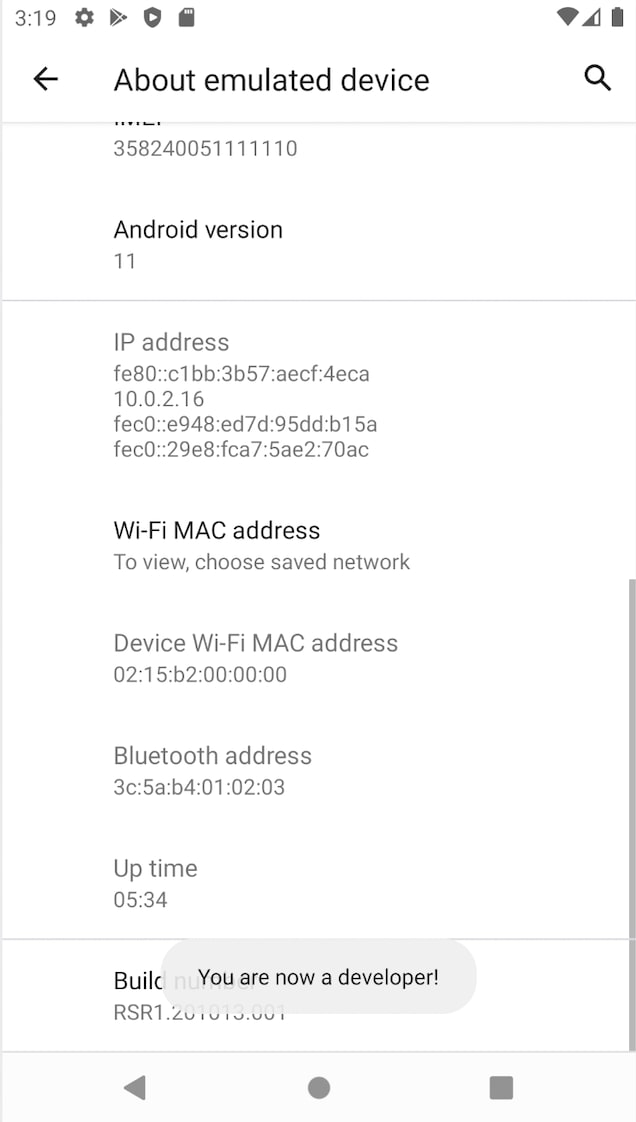 Back to 'Settings', open System', you should see that 'Developer Options' were unlocked. 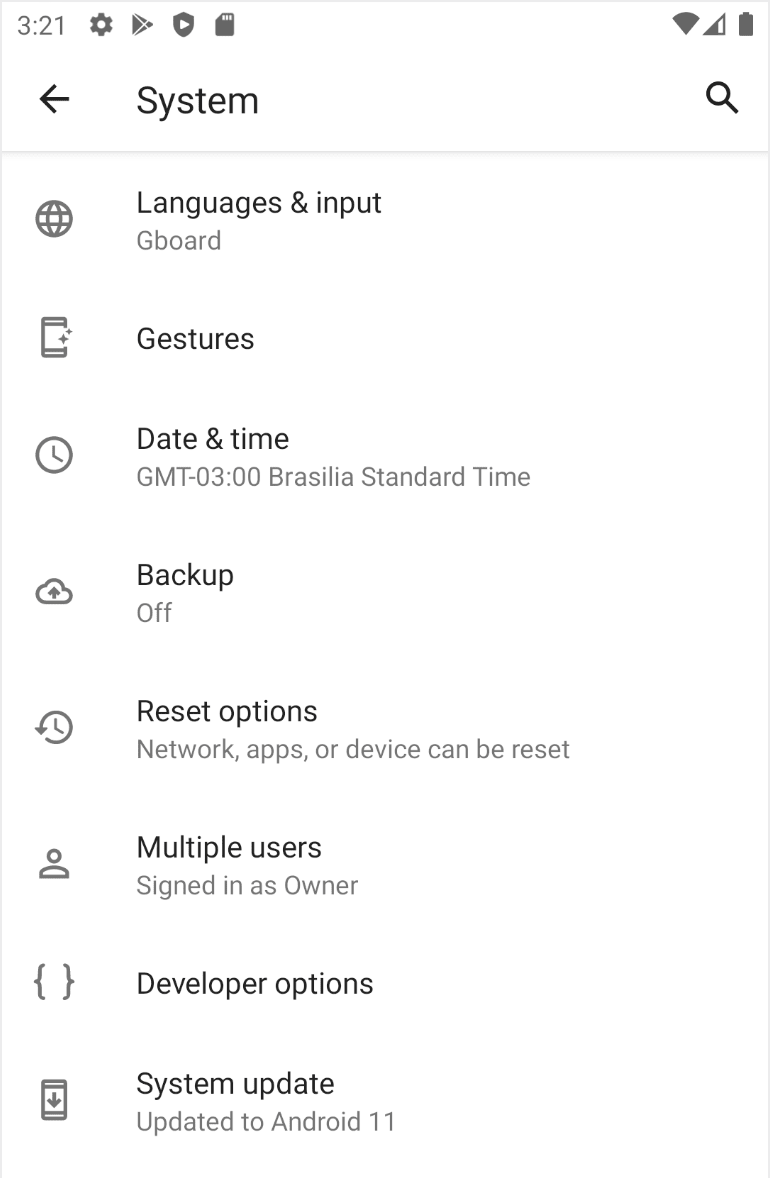 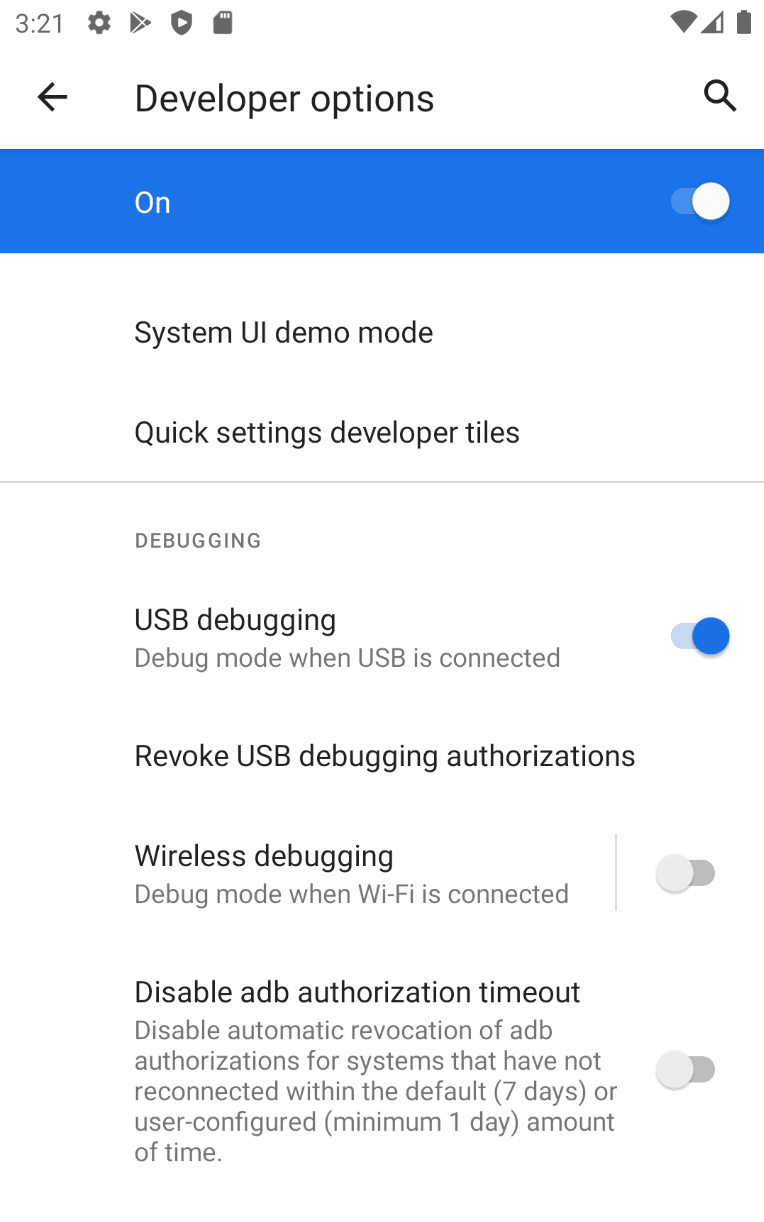 Plug your Android device in your PC via USB, then run adb devices on your terminal. The output should list your device and also point it is unlocked for debugging. Now, go back to Android Studio, click on the device dropdown list (the one in which you selected your Virtual Device before) and your physical device should now be listed, select it. Click on the 'run' button and you should see the app in your device, ready to be interacted with.

Congratulations! You are now a Flutter developer. If this article has helped you in any way, please remember to give a heart, comment, etc. Good luck in your developer journey!

Otavio Monteagudo
401 unauthorized bio
How do you safely share passwords?
#discuss #security #productivity #webdev
What was your win this week?
#discuss #weeklyretro
We are trending on Github, This is how we did it 🤯
#discuss #javascript #webdev #productivity

Once suspended, otamm will not be able to comment or publish posts until their suspension is removed.

Once unsuspended, otamm will be able to comment and publish posts again.

Once unpublished, all posts by otamm will become hidden and only accessible to themselves.

If otamm is not suspended, they can still re-publish their posts from their dashboard.

Once unpublished, this post will become invisible to the public and only accessible to Otavio Monteagudo.

Thanks for keeping DEV Community safe. Here is what you can do to flag otamm:

Unflagging otamm will restore default visibility to their posts.