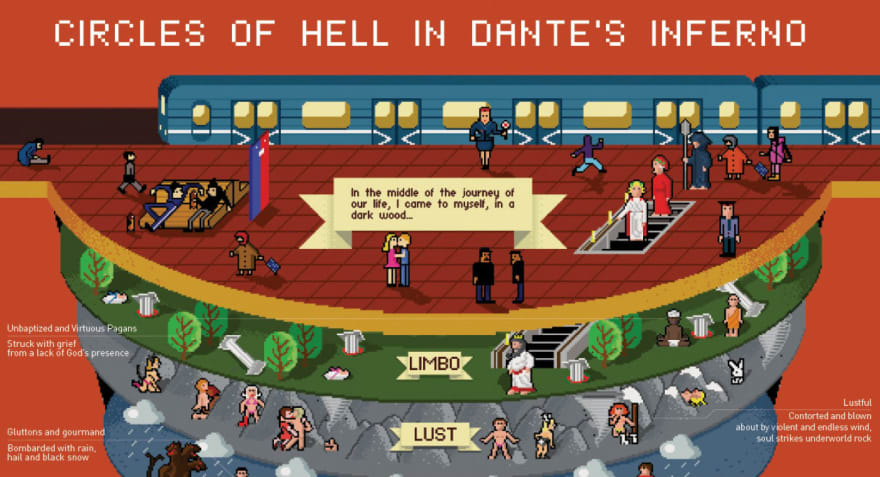 When working with JavaScript, there is a concept known as callback hell. It describes a deeply nested set of callback functions that is hard to read and maintain. Callback hell happens due to the asynchronous non-blocking nature of JavaScript. Below is an illustration based on Dante's 😈 nine circles of hell.

You commonly encounter callback hell when making an AJAX HTTP request. To flatten out nested callbacks for readability and maintainability, Promises can be used. With Promises, there are two techniques for flattening out our callbacks -- (1) then and (2) async-await.

This pattern helps flatten out nested callbacks into sequential thens. The entire execution of this fetch request is completely asynchronous and non-blocking.

This pattern does the same thing, but is different because each line with await causes the code execution to block while waiting for the promise to resolve.

Useful to use if your code works with Promises and needs to execute sequentially. Due to blocking, you might lose some ability to process code in parallel. I've primarily used async-await when making API requests from a Node.js server.

This has been most useful for me when working on the client so the UI thread is not blocked since requests are being processed in parallel. If you develop your frontend with React.js, a typical use case might be to display a loading screen until a fetch request returns and then using a setState to update the UI.

Both Promise mechanisms can be used to solve the callback hell issue, each with their own optimal use cases. Don't limit yourself to any dogma. Do what makes sense for your use case.

Once suspended, pan will not be able to comment or publish posts until their suspension is removed.

Once unsuspended, pan will be able to comment and publish posts again.

Once unpublished, all posts by pan will become hidden and only accessible to themselves.

If pan is not suspended, they can still re-publish their posts from their dashboard.

Once unpublished, this post will become invisible to the public and only accessible to Pan Wangperawong.

Thanks for keeping DEV Community 👩‍💻👨‍💻 safe. Here is what you can do to flag pan:

Unflagging pan will restore default visibility to their posts.