Java has a very rich set of features that gives developers a lot of options to choose their implementation from, two of them, nested classes and lambda expressions.

I was reading a certain part of a code base and realized that I have not really fully understood the differences between the types of nested classes. The section below is heavily based from the Java Documentation for Nested Classes, so in-depth explanations can be checked here.

A nested class is a class within another class, i.e. a member of its enclosing class. It is divided into two categories: non-static and static.

📌 Why Use Nested Classes

To summarize the hierarchy stated above, the image below shows the types of nested classes. 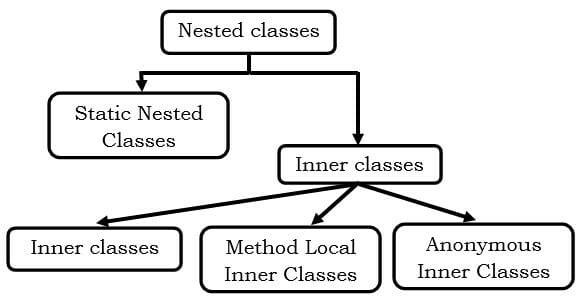 A lambda expression consists of the ff.

A functional interface is any interface that contains only one abstract method. It may contain one or more default methods or static methods. Because it only contains one abstract method, the name can be omitted when implementing it. By doing this instead of using an anonymous class expression, a lambda expression is used. The JDK defines several standard functional interfaces which can be found in the package java.util.function.

📌 Accessing Local Variables of the Enclosing Scope in Lambda Expressions

So how can the type of a lambda expression be determined, e.g. the type of p in the example below?

For instance, if the functional interfaces java.lang.Runnable and java.util.Callable<V> are implemented and overloaded by a certain class like this,

Which method will be invoked by the statement below?

The method with argument Callable<V> will be invoked because the lambda returns a value, in this case the string done. Note that the method invoke(Runnable) does not return a value.

A lambda can be serialized if its target type and its captured arguments are serializable. However, like inner classes, 🛑 the serialization of lambdas are strongly discouraged.

Lambdas can be used to create anonymous methods. However, there are times when it does nothing but call an existing method. In these cases, it is often clearer to refer to the existing method by name, called method referencing. They are compact, easy-to-read lambdas for methods that already have a name.
For instance this can be done in sorting an array of Person objects by age.

The method reference Person::compareByAge is semantically the same as the lambda expression where compareByAge is a static method of the Person class.

There are four types of method referencing

📌 When to Use Nested Classes, Local Classes, Anonymous Classes and Lambda Expressions

Nested Classes enable the logical grouping of classes that are only used in one place, increase the use of encapsulation, create more readable and maintainable code. Local classes, anonymous classes and lambda expressions also share the same advantages but they are usually used for more specific situations:

Getting used and familiar with nested classes and advanced lambdas with generics certainly takes a lot of reading code and practice. We will eventually get there.

As always, cheers to continued growth and learning 🍷!

Once suspended, pat_the99 will not be able to comment or publish posts until their suspension is removed.

Once unsuspended, pat_the99 will be able to comment and publish posts again.

Once unpublished, all posts by pat_the99 will become hidden and only accessible to themselves.

If pat_the99 is not suspended, they can still re-publish their posts from their dashboard.

Once unpublished, this post will become invisible to the public and only accessible to Patricia Nicole Opetina.

Thanks for keeping DEV Community 👩‍💻👨‍💻 safe. Here is what you can do to flag pat_the99:

Unflagging pat_the99 will restore default visibility to their posts.