JavaScript hoisting refers to the process where the compiler allocates memory for variable and function declarations prior to execution of code [1]. That means that declarations are moved to the top of their scope before code execution regardless of whether its scope is global or local.

hoisting is the compiler splitting variable declaration and initialization and moving only the declarations to the top of the code.

Thus, variables can appear in code before they are even defined. However, the variable initialization will only happen until that line of code is executed.

The code snippets below show hoisting in action. The first snippet shows how the code is expected to be written: declare the function first and use/invoke it after.

On the snippet below, the method is invoked first, and the function declaration is written next. However, both of them have the same output - they print the string Am I hoisted?

So even though the function is called before it is written, the code still works. This happens because of how context execution works in Javascript.

When a Javascript engine executes code, it creates execution context. Each context has two phases: creation and execution.

When a script executes, the JS engine creates a Global Execution Context. In this phase, it performs the following tasks:

Lookin back at this snippet,

the global execution context at this phase, would somehow look like this 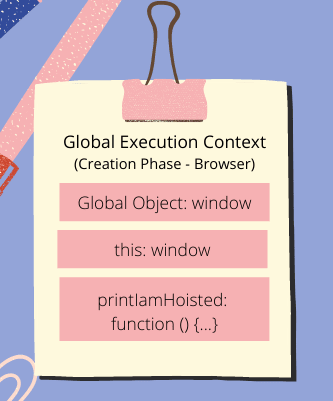 At this phase, the JS engine executes the code line by line. But by virtue of hoisting, the function is declared regardless of line order, so there is no problem calling/invoking the method prior the declaration.

For every function call, the JS engine creates a new Function Execution Context. This context is similar to global execution context, but instead of creating the global object, it creates the arguments object that contains references to all the parameters passed to the function. The context during this phase would look somewhat like : 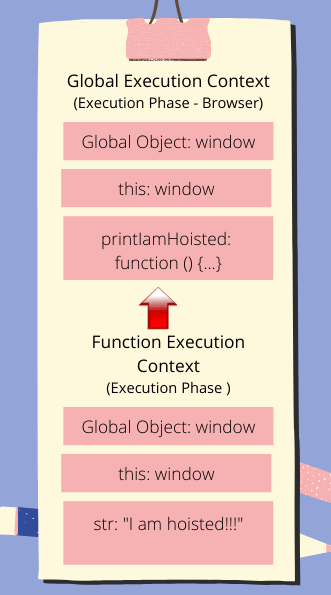 📌 Only the declarations (function and variable) are hoisted

JS only hoists declarations, not initializations. If a variable is used but it is only declared and initialized after, the value when it is used will be the default value on initialization.

For variables declared with the var keyword, the default value would be undefined.

Logging the hoistedVar variable before it is initialized would print undefined. If however, the declaration of the variable is removed, i.e.

a ReferenceError exception would be thrown because no hoisting happened.

Variables declared with let and const are also hoisted. However, unlike variables declared with var, they are not initialized to a default value of undefined. Until the line in which they are initialized is executed, any code that access them, will throw an exception. These variables are said to be in a "temporal dead zone" (TDZ) from the start of the block until the initialization has completed. Accessing unintialized let variables would result to a ReferenceError.

The term "temporal" is used because the zone depends on the execution order (referring to time - temporal) rather than the order in which the code is written (position). However, the code snippet below will work because even though sampleFunc uses the letVariable before it is declared, the function is called outside of the TDZ.

This is why it is always good to declare variables regardless of whether they are of function or global scope.

Introduced in EcmaScript 5, strict mode is a way to opt in to a restricted variant of JS. Strict mode make several changes to normal JS semantics

With regards to hoisting, using strict mode will not tolerate the use of variables before they are declared.

JS functions can be declarations or expressions.

Function declarations are hoisted completely to the top. That is why a function can be invoked even before it is declared.

Function expressions, are NOT hoisted. This is because of the precedence order of JS functions and variables. The snippet below would throw a TypeError because the hoisted variable amIHoisted is treated as a variable, not a function.

Hoisting in JS is the compiler splitting variable declaration and initialization and moving only the declarations to the top of the code. So even though the functions and variables are called/used before they are written, the code still works. This happens because of how context execution works in Javascript.

Note that only declarations are hoisted, not initializations. For variables declared with the var keyword, the default value would be undefined. For let variables, until the line in which they are initialized is executed, any code that access them, will throw an exception. These variables are said to be in a "temporal dead zone" (TDZ) from the start of the block until the initialization has completed. Accessing unintialized let variables would result to a ReferenceError.

That is it for the basics of JS hoisting, my fifth WIL(What I Learned) dev post 😄.

As always, cheers to lifelong learning 🍷!

Deleting an Item in an Array at a Specific Index

A Complete Guide to Next.js Authentication

Once suspended, pat_the99 will not be able to comment or publish posts until their suspension is removed.

Once unsuspended, pat_the99 will be able to comment and publish posts again.

Once unpublished, all posts by pat_the99 will become hidden and only accessible to themselves.

If pat_the99 is not suspended, they can still re-publish their posts from their dashboard.

Once unpublished, this post will become invisible to the public and only accessible to Patricia Nicole Opetina.

Thanks for keeping DEV Community 👩‍💻👨‍💻 safe. Here is what you can do to flag pat_the99:

Unflagging pat_the99 will restore default visibility to their posts.