It wasn't my intention when I started the first article but this has become a series of how to run node applications in production with IIS on Windows. These are the previous articles on the topic:

In the last article a node web application was deployed on a Windows server. With the help of the HTTP platform handler, IIS manages the node process for us. When it receives a request it will start the node process and pass the web request for node to handle it.

In some cases however we don't want to expose the node.js web application via IIS. I have built an internal API in the past which should not be accessible from the outside for security reasons. The internal API is only consumed by other applications running on the same server. In this case, we can't rely on IIS to manage the node process for us as IIS would expose the web application to the internet.

Luckily there is a NPM package node-windows which can install a node application as a Windows service. This service can be automatically started when the server restarts.

This is the Hello World sample from the Express website, we will install it as a Windows service:

The node-windows NPM package can do this for us. Run the following commands

Once the package is installed it can be used to install the application as a service with the following node script:

Just run the script as any other node script:

If User Account Control (UAC) is enabled on Windows you will have to give permission a few times to complete the installation. Once this script has finished the service is installed and the application is running. You can find the service in the Services dialog. It will have the name that you have passed to the Service class in the node script. 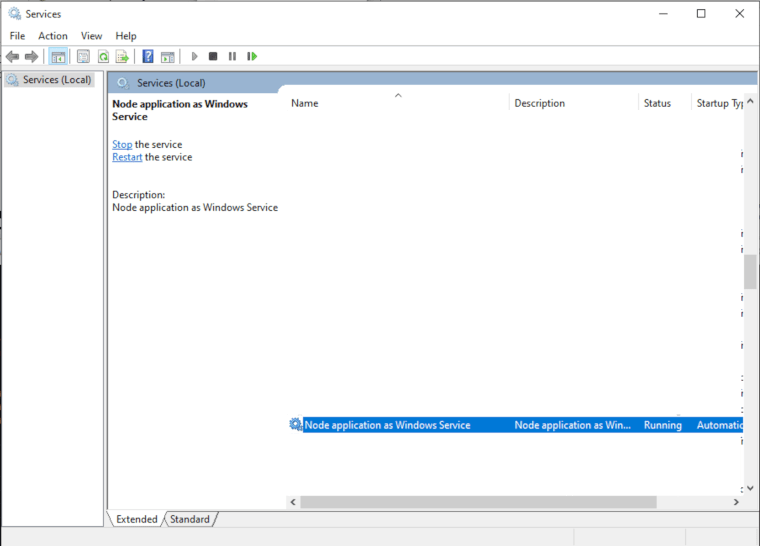 If the service ever needs to be uninstalled, the Service class also has an uninstall method:

This can also be run as any other node script:

Because the Windows service is set to start automatic, it will start every time the server is restarted. Exactly as expected. Happy deploying!

This is a cross post from my own blog.

My app works perfectly locally but when I deploy to heroku, it crashes

How to iterate through objects in JAVASCRIPT ?