Python is an interpreted ,high-level ,general-purpose programming language used in web development, data science and creating software prototypes.
Python programs have the extension .py and can be run from the command line by typing python file_name.py.

Python has a bunch of features that make it attractive as your first programming language:
Free: Python is available free of charge, even for commercial purposes.
Open source: Anyone can contribute to Python development.
Versatile: Python can help you solve problems in many fields, including scripting, data science, web development, GUI development, and more.
Powerful: You can code small scripts to automate repetitive tasks, and you can also create complex and large-scale enterprise solutions with Python.
Multiparadigm: It lets you write code in different styles, including object-oriented, imperative, and functional style.

In the Command Prompt, type python command as follows: 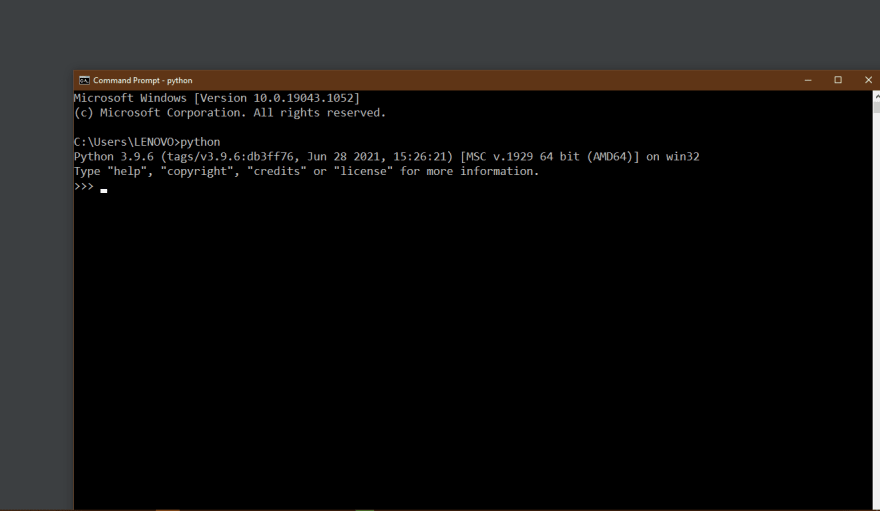 If you see the output like the above screenshot, you’ve successfully installed Python on your computer.

To set up VS Code,

Follow the steps below to install python extension to make VS Code work with python.

Now we are ready to develop the first program in Python.

print() is a built-in function that displays a message on the screen.

The following output will be displayed

Comments are pieces of text in your code but are ignored by the Python interpreter as it executes the code.
Comments are used to describe the code so that you and other developers can quickly understand what the code does or why the code is written in a given way.
To write a comment in Python, just add a hash mark (#) before your comment text:
For Example:

In Python, variables are names attached to a particular object. They hold a reference, or pointer, to the memory address at which an object is stored.
Here's the syntax

Always use a naming scheme that makes your variables intuitive and readable.
Variable names can be of any length and can consist of uppercase and lowercase letters (A-Z, a-z), digits (0-9), and also the underscore character (_).
Even though variable names can contain digits, their first character can’t be a digit.
Here are some examples of valid and invalid variable names in Python:

Numeric literals can belong to three different numerical types;
Integers:
Are whole numbers
Examples 5,4,6
Floats:
Numbers with decimal points
Examples 3.4,5.6,8.9
Complex numbers:
Numbers with a real part and an imaginary part
Examples 1.5j,3+3.5j
Arithmetic Operators represent operations, such as addition, subtraction, multiplication, division, and so on. When you combine them with numbers, they form expressions that Python can evaluate:

Booleans are implemented as a subclass of integers with only two possible values in Python: True or False. The two values must start with a capital letter.
Booleans are handy when you are using Comparison operators
Here is how it works

Python provides a built-in function such as bool() and int().
bool() takes an object as an argument and returns True or False according to the object’s truth value.
Here is how it works;

Strings are pieces of text or sequences of characters that you can define using single, double, or triple quotes:

Once you define your string objects, you can use the plus operator (+) to concatenate them in a new string:

The string class (str) provides a rich set of methods that are useful for manipulating and processing strings. For example,
str.upper() returns a copy of the underlying string with all the letters converted to uppercase:

str.join()takes an iterable of strings and joins them together in a new string.

Lists are used to store multiple items in a single variables.
Lists are defined in Python by enclosing a comma-separated sequence of objects in square brackets ([]), as shown below:

Lists in python have the following characteristics;

extend(iterable)
Adds to the end of a list, but the argument is expected to be an iterable.

insert()
Inserts an object into a list at the specified index.

Tuples are identical to lists in all respects, except for the following properties:

Dictionary in python is an ordered collection, used to store data values.
You can define a dictionary by enclosing a comma-separated list of key-value pairs in curly braces ({}). A colon (:) separates each key from its associated value.

Once suspended, phylis will not be able to comment or publish posts until their suspension is removed.

Once unsuspended, phylis will be able to comment and publish posts again.

Once unpublished, all posts by phylis will become hidden and only accessible to themselves.

If phylis is not suspended, they can still re-publish their posts from their dashboard.

Once unpublished, this post will become invisible to the public and only accessible to Phylis Jepchumba.

Thanks for keeping DEV Community 👩‍💻👨‍💻 safe. Here is what you can do to flag phylis:

Unflagging phylis will restore default visibility to their posts.