As developers or programmers, call yourself anyone. As long as you write code there is often one thing that gets overlooked. Testing. Testing is that part of development where you’re suppose to rigorously test your applications to ensure that they meet the required functionalities.

Let’s start of with why we even do testing in the first place: 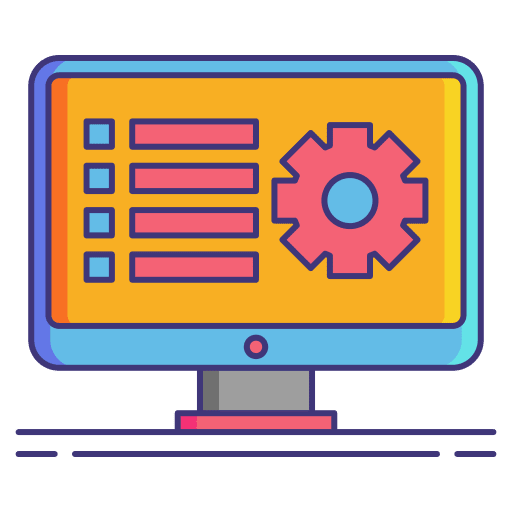 To create our unit test we will be using the python standard library unittest. This way of creating test cases uses OOP(Object Oriented Programming) by creating a class that will house all our test cases. This will allow us to run all the test cases in the class at once.

Note: You can use any IDE or text editor that your familiar with (default python IDE can be used). For this, I will be demonstrating using Visual Studio Code with a python extension.

We will first import our unit test library:

Now to make our class declaration:

Note that (unittest.TestCase) is inheritance in python. Essentially giving functionality to the class.

Inside the class add our first function:

self.assertEqual is a method given by the previously inherited class (unittest.TestCase). This method tests if the 2 variables are equally of the same value.

Adding our test runner. This is what makes our unit test run:

This is what the completed code should look like: 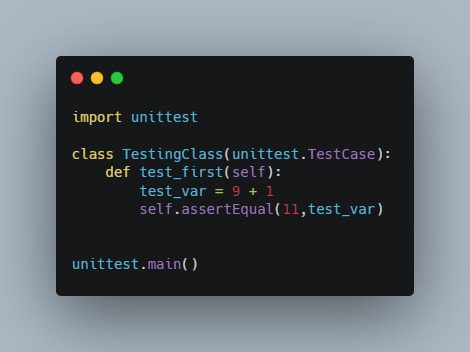 The above code demonstrates testing if 9 + 1 is equal to 11. If you know any basic math you should know that 9+1 = 10. Hence this test case would fail.

As you should have already guessed. Failure!

The fix is simple. Modify the code to: 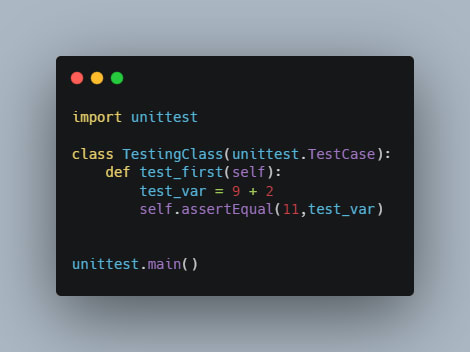 For testing outside of functions, the previous example might not be realistic. Let’s replace the test_var values to now come from a function. We will add a functional declaration to the top of our file.

This function adds 2 numbers together. Replace 9 + 2 with the function call add(9,2) and then run your code.

We have only implemented one test case so far. Each function/method (both are the same thing in this case) in the TestingClass represents a single test case.

Note: All the names of the test cases created should be preceded with the word “test” or else it will not be recognized by the test runner. 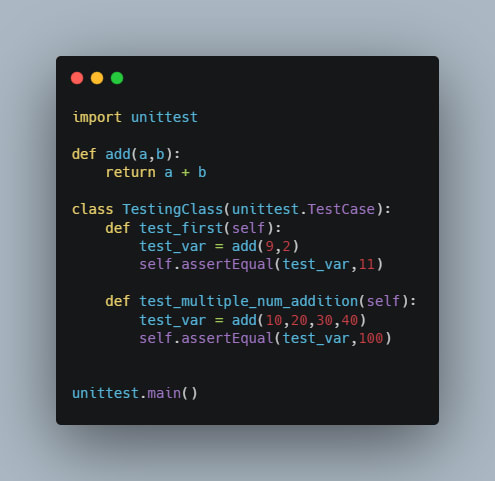 This will obviously fail because the function parameters only accept 2 arguments. But what if we really wanted to add more numbers?

This can be solved by doing a change to the add function:

Notice the asterisk (*) left of the values argument. This allows you to input multiple arguments as well as allowing the values to be stored as a tuple.

Your code before execution: 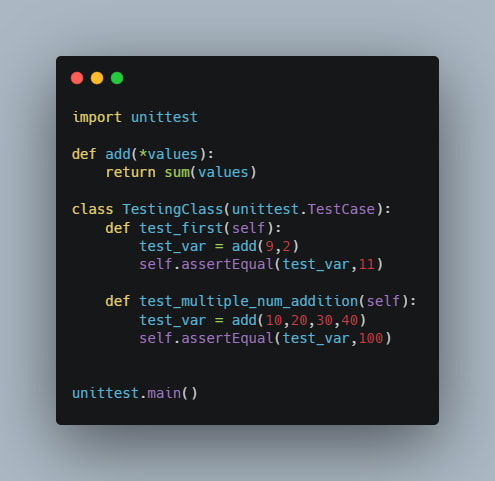 Your code while being executed:

Putting an asterisk before your variable in the function parameters is called non keyword arguments. Want more information checkout the article below.

Giving testing a try might give your code additional robustness. It also has the benefit of changing the way you approach development. Having a testing mindset can ensure that there are less errors in production and less repetitive manual testing during development.

If you liked this article and want to support. Buy me a coffee. The link is provided below.

Jordan Williams
Enjoys creating software that make tasks simpler. Always trying to gain new knowledge and expertise. Support link: https://www.buymeacoffee.com/PlatinumCoder
Python Features You Should Know (That can Save you A Lot of Time !)
#python #tutorial

Once suspended, platinumcoder will not be able to comment or publish posts until their suspension is removed.

Once unsuspended, platinumcoder will be able to comment and publish posts again.

Once unpublished, all posts by platinumcoder will become hidden and only accessible to themselves.

If platinumcoder is not suspended, they can still re-publish their posts from their dashboard.

Once unpublished, this post will become invisible to the public and only accessible to Jordan Williams.

Thanks for keeping DEV Community 👩‍💻👨‍💻 safe. Here is what you can do to flag platinumcoder:

Unflagging platinumcoder will restore default visibility to their posts.