Disclamer : this part is not about haskell, it's the high level design of the project, if you want code right now go to the part 2.

A year ago I created a POC for a repl client for the interesting barrelDB. It was a pet project, and gave me the opportunity to explore Haskell basics.

I met @benoic the author of barrelDB which encourage me to make this POC a real thing. We discussed and I identified subjects to be addressed.

A comparable project would be psql for postgres.

It's goal is to be able to get and put documents to barrelDB and to get information on the barrelDB nodes.

The Command line parser cuts the command in parts to feed the Query parser.

The Query parser check the validity of the data given to the command and gives a buffer to the Transport library.

The Transport library sends the query buffer to the DB.

The Transport library receives the response buffer from the DB and the it to the Command line parser.

The Command line parser get the gives the response to the Repl engine.

The Repl engine write the response to the shell 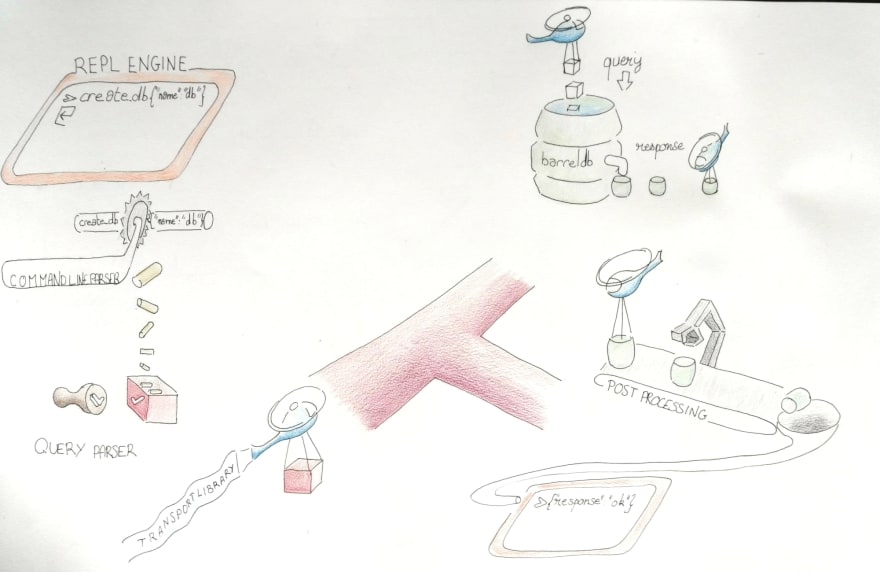 Where do I begin with ?

This project has several part, to be able to do it I need to know where do I begin.

Let's write the steps from our previous example.

After an intense usage of an agile disruptive methodology - I faced to a terrible conclusion :
If I can't talk to the DB server this project is dead.

Step 3 and 4 are the one to begin with so the first part I'll work on will be the ... Transport library.

Cut it into pieces

Now that we know where we will work first. It's good to have an idea of the pieces that come next.
This list won't be followed as it is. Software development is like that, what is planned is not what will happen.
Meanwhile it's dangerous to write code without a clear plan. Let's write down the pieces we want, an class prioritize it in mandatory and must have.

In this first post we get to know the basic design of askBarrel a command line barrelDB client. For most developer (that mean at least me) it's rather frustrating not to see a line of code but getting the lights of the high level design helps not to fall in the shadow of bad code.

Part 2 will be an introduction on haskell focussed on the concepts needed to do the first part of the project :
the Transport library.

How to remove all docker containers in a network

What Is and How the Internet Works