As a developer working primarily on PHP and Laravel I have come across a multitude of services and products related to Laravel. These things made Laravel a popular (Extremely popular I would say) among PHP developers.

Even though criticisms are present against Laravel being batteries included framework, its popularity skyrocketed since its stable release 4.2 launches in June 2014.

See the Google trends chart for past 5 years 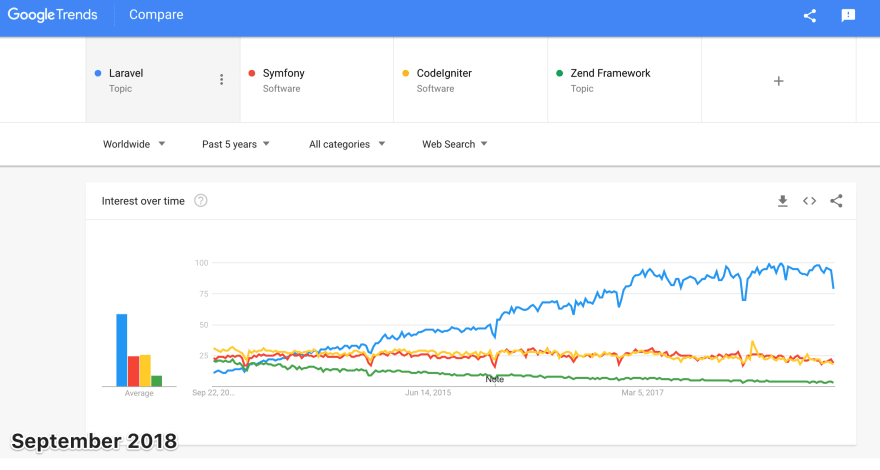 I would say Laravel gained its momentum not only because its a developer friendly framework or a robust framework; rather because of its surrounding ecosystem of products and services which would help in crafting an application faster. Much like Apple's products and ecosystem.

As of August 2018, Laravel 5.7 is released and with the ecosystem, it's a whole lot powerful. Let me list out some of those here. Even though I haven’t used all of them in production, I would consider these things as important as laravel itself.

Robustness of a frameworks doesn’t help when there are not enough resources to introduce or teach them to the developers. At least in my case, I am super lazy to learn a new framework just because the learning that I get from it is nothing but how the framework does a specific thing? How routing is done in Framework X doesn’t make any change in what routing is.

Laracasts is one of the obvious names in the laravel world. Jefrrey Way produces upto date screencasts on laravel and related technologies. I personally found the videos quite entertaining and informative (Its the Netflix for developers). Laracasts is not only about Laravel but as an integral part PHP and its intricacies are introduced.

No matter what the software is, it's incomplete and unusable without its documentation. Laravel.com contains the documentation for the framework, officially supported packages such as Scout, Passport etc… and related subjects such as setting up a development environment, deployment instructions etc…

Being an open source project the laravel documentation is constantly updated and accurate as well.

Setting up a development environment as similar as to the production was a pain in the ass previously, but with vagrant and virtualisation, this task is as simple as installing few softwares, and no need to worry about cross platform issues as well.

I feel pity for those who use xampp or mamp and whine after deployments. Time to switch to the new world dudes…

Envoyer is a deployment tool built on top of laravel itself. It can hook into your version control systems events, and trigger deployments automatically. Envoyer can deploy any PHP application on AWS, Digital Ocean etc… (Of course tuned for Laravel as they say).

Laravel forge is a server provisioning and managing service. It can create and manage PHP servers for you on AWS, Digital Ocean or Linode. It can provision SSL certificates and can manage deployments as well.

Lumen is the small brother of Laravel. A slimmed down version of Laravel with the primary focus on the development of api's and micro services.

A goto software for building API based apps.

I wouldn’t say spark is an integral part of laravel developer ecosystem. But to scaffold an application super fast you have laravel spark. Spark can help you to start an application with ready-made Billing, Subscription, Invoices, Notifications etc…

Nova is a recent addition to the ecosystem. Laravel Nova provides you an admin panel for your application. With the addition of ready to use CRUD components, you can build an admin section super easy.

Typically nova doesn’t need any database tables to manage itself. It's completely code driven. You don’t have to touch the existing laravel models at all.

Laravel ships with queue component out of the box. You can view and manage your asynchronous jobs and queues with the horizon in a breeze.

Horizon integrates with Redis and it can retry failed jobs automatically based on the specified configuration which makes our life a whole easier.

Laravel Shift is a service which can automatically upgrade Laravel versions on your behalf. All you have to do is give access to your git repository and it will upgrade your codebase by creating a detailed pull request.

11 . Laravel News
Since 2012 when the Laravel initial release came out, Laravel news has been bringing the latest news, tutorials and podcasts to us. I would recommend everyone to have a look there to get the latest updates on Laravel.

PHP runs the ~70% of the web. Being an opensource project with ~46k stars in GitHub as of now, Laravel really stands out. It means nothing but its going to be around for a while. With official packages such as Cashier for billing, Scout for instant search etc... it's even more powerful and almost every day new features and bugfixes are being added to the framework.

🔥🔥 I would say stay tuned for more excitement 🔥🔥