So how long does it take to become a Java developer? Does it take ten months, ten weeks or a day? You may find odd and unspecific answers to the question on online forums. As it entirely depends on the learning capacity of an individual. But, it will not take more than 3 months to 12 months for a person to learn Java. The core aim of this roadmap is to help you identify what to learn next, rather than encouraging you to pick what’s in trend. Here you will find the list of technologies, tools and libraries that you might adapt to become a Java developer. Using which you will be able to know why you choose one tool over another.

Many of you might have already checked our previous blog on Java Developer Roadmap. However, today we are going to share a list of extended learning (as shown in the image) that is essential for your journey. The roadmap includes all the must-learn, good-to-know and might need technologies, tools and libraries you should be aware of. 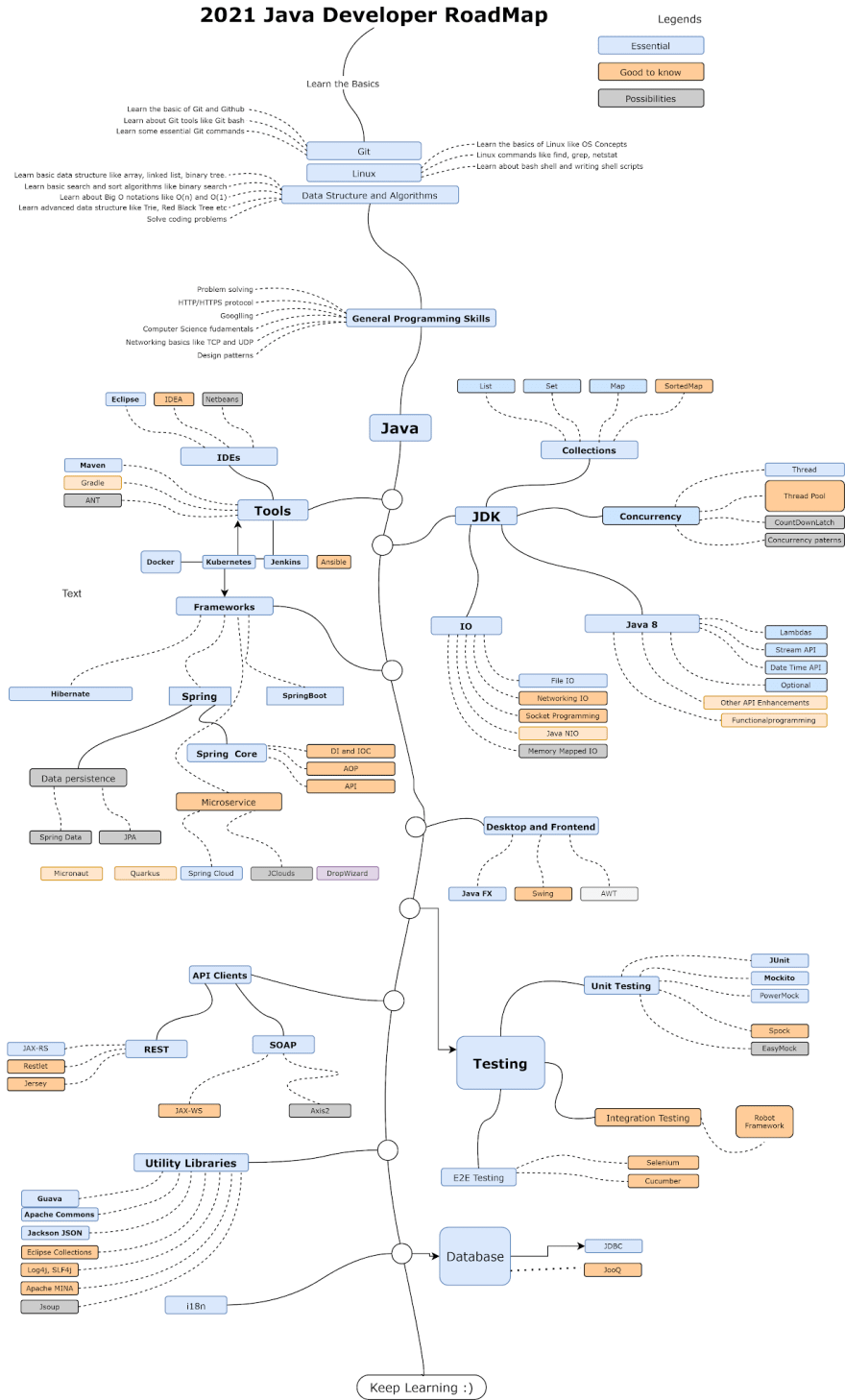 What Does ‘To Learn & Know Java’ Mean?

In simple terms, being able to solve problems using Java will mean that you know Java. These problems might relate to clearing a Java developer’s job interview or doing a technical task (like creating your project or knowing how to write code that does what you want).

Certainly, your intricacies will evolve with time as you will want to grow your job profile. But when can you write you know Java in your resume? It is when you thoroughly understand Core Java. It is the first step you need to take to become a Java developer. You might be thinking, “what does Core Java cover?”.

So, your first goal should be learning the fundamentals of Java.

Top Skills Java Developers Must Have

Before moving on to the Tools, APIs, Frameworks, Testing, and Database, let’s acknowledge must-have skills to become a Java developer.

Git & Github are the widely used version control system and cloud-based hosting services for managing Git repositories, respectively. Both Git and Github offer valuable version-control functionality to the developers, which helps in the continuous development of the project without worrying about messing with other parts. As a developer, one needs to be familiar with essential concepts like a master, branch, checking push or pull, and checkouts. Apart from these, a developer should also know commands like git diff and git commit.

HTTP/HTTPS protocol is the basis of the web. And for a developer, it is essential to know the difference between them, how they work, different HTTP methods, which one is more secure, which port each of them uses, and what is the purpose of both.

Another tech skill a Java programmer should know about is SQL. With the help of SQL, it becomes easier to troubleshoot backend issues. SQL provides the API for accessing and processing data that is stored in the database for Java. It helps in establishing a connection through DriverManager, provides standard mapping for SQL types to interfaces and classes, offers comprehensive information about the complete database, etc. By understanding SQL, you will be able to understand the query database, stored procedures and find whether the problem is in the database layer or Java layer. SQL is a skill that a programmer can easily learn and use for a long time in their career.

Design patterns are the well-described solutions to a set of common problems in software. It provides an industry-standard approach to overcome the recurring problems. Using design patterns enhances reusability that enables robust code while reducing the cost of ownership of the software. Moreover, design patterns make the code easier to understand and debug. The design patterns of Java is divided into three major categories, i.e. creational, structural, and behavioural. So by learning about the different design patterns of Java, you will be able to determine which one should be used and when.

Now that we have a basic knowledge of the skills that a Java programmer should know about. It is time to explore the roadmap and find out tools, libraries, APIs, or frameworks that help in becoming a professional Java developer this year.

b. Gradle or Maven

Be Ready to Learn Consistently

Last but not least, one thing that you need to ensure is learning consistently. It is important to make progress even if it’s at a slow pace. On average, you should be learning Java for around 1-3 hours regularly. And yes, the major mistake that one makes while learning to program is only reading books! You can’t learn how to code without writing. Programming is a practical activity. To become a professional programmer of Java, start practising code as early as possible.