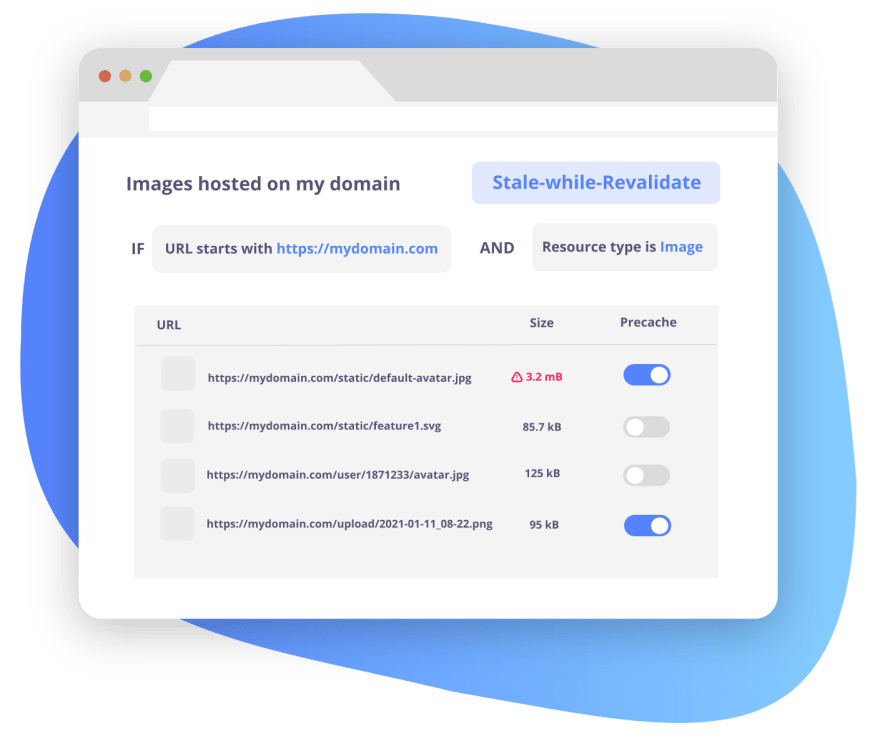 A couple of days ago, we finally released an exciting new Progressier feature which our customers have been relentlessly requesting since we launched our beta.

With our caching strategy builder, anyone who owns a web app can easily configure caching strategies -- with toggles and dropdown rather than complicated regex and hard-coded service workers.

Why should I care about caching strategies?

By default, browsers tend to cache resources somewhat unpredictably through the HTTP cache mechanism. You have little control over how resources are cached and updated.

Instead with the Cache interface available in service workers, you can define very precisely how each type of resource is fetched, cached and refreshed.

With the right strategies, you can:

Pretty cool, in theory. In practice? Not so easy. Earlier this year, Google nearly gave every web app developer an ultimatum: make your app work offline or lose the install functionality. As I postulated when they abandoned that plan, making a website work offline consistently is harder than most people think.

In 2021, most developers use Workbox -- a JavaScript library that abstracts the Fetch API and Cache API. Workbox simplifies things… but isn't quite simple enough yet to my taste. Testing strategies is a hassle. Hard-coding lists of URLs in a service worker isn't exactly future-proof. The order of your rules can lead to unexpected behaviors. And writing Regex is a notorious pain in the ass.

Caching is a minefield

CORS, preflight requests, opaque responses, cache-control headers… these are some of the concepts that make caching hard to grasp. They're abstract and opiniated -- and truthfully most developers don't really know about them.

The key is that everyone deals with caching the same way: by copy-pasting code snippets from the Workbox site or the Google Dev Site and swapping sample values with their own variables. Progressier lets you define these variables with toggles and dropdowns instead of hard-coding them in your service worker.

Specify rules, choose a strategy, see matching resources, precache URLs, auto-retry them - all in one interface with inputs and toggles instead of code

And then there are variable-looking things that in our day and age just aren't needed anymore. One of the ways Progressier simplifies the process is by shielding you from them automatically. A good example of this is caching expiration dates.

A modern take on caching

You shouldn't have to worry about expiration dates anymore. Because caching expiration dates are no longer needed. They're an antiquated way of invalidating cached resources -- reminiscent from the time the only way to deal with caching was the unpredictable HTTP Cache interface.

With the Cache interface available in service workers, there's absolutely no need to set expiration dates anywhere. You have much better control on things now:

And because Progressier is a no-code tool, you specify these rules in plain English -- just the way I did it above. That may seem frivolous. But if you have to modify them two years from now, you'll be glad not to have to decipher a bunch of regular expressions.
You can also visualize how each of the strategies intercept your resources (as rules may have overlap). 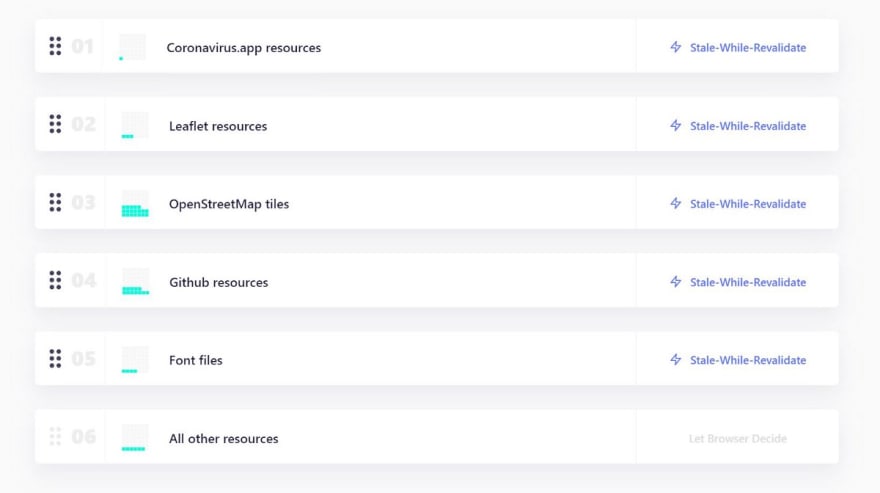 A visual indicator tells you how many actual resources from your app match each of these strategies.

And all other caching features too

Caching strategies is the key to making a web app functional offline. For a complete offline experience, there are a few other mechanisms that one must know about as well.

Here are some of the things you can configure your web app to do automatically with a few clicks in Progressier:

Steve Jobs said "Simple can be harder than complex: You have to work hard to get your thinking clean to make it simple. But it's worth it in the end because once you get there, you can move mountains."

Building the user interface of a caching strategy builder might be the hardest simple thing I've ever had to do. And while Progressier definitely won't move mountains, it does put caching within reach of any developers -- whether they write code or use no-code builders. If this sounds interesting, you can try it for free here.

😍 Want to help the DEV Community feel more like a community? 🥹

Raffle Draws on the Ethereum Blockchain: A Beginner's Guide

Once suspended, progressier will not be able to comment or publish posts until their suspension is removed.

Once unsuspended, progressier will be able to comment and publish posts again.

Once unpublished, all posts by progressier will become hidden and only accessible to themselves.

If progressier is not suspended, they can still re-publish their posts from their dashboard.

Once unpublished, this post will become invisible to the public and only accessible to Kevin Basset.

Thanks for keeping DEV Community 👩‍💻👨‍💻 safe. Here is what you can do to flag progressier:

Unflagging progressier will restore default visibility to their posts.