This week we're gonna explore comments in Rust. Commenting in Rust serves a couple of purposes. Using regular comments we can explain how we implemented a solution or why we chose to implement that solution. Using documentation comments ("doc comments") we can document our code by explicitly describing how to use our code and how our code may behave in certain situations. Doc comments also provide us with some awesome functionality—Rust is able to auto-generate documentation based on the doc comments we made in our code. Whether we use regular comments or doc comments, Rust gives us two powerful conventions to explain our code to other humans who write code.

Let's see how we can take advantage of Rust's comment syntax rules to document our code as we write it.

We can create regular comments in Rust using // syntax.

Inner Line Documentation Comments use //! and are useful for describing high level functionality of an entire crate.

We can think of a crate in Rust as either a binary or library.

A binary crate which is an executable, a machine code representation of the code we write. (i.e. an app, website, any program we create!)

Inner Line Documentation Comments use //! and are mostly used to provide top-level documentation to a crate you create.

usize lets our function know our number argument has to be number between 0 and 18446744073709551615. The usize after -> let's Rust know this function returns a number with the type of usize

Outer Line Documentation Comments use /// and are the preferred way to document any other code you write.

Using any form of documentation comment we can document our code using Markdown, specifically the CommonMark specification.

By supporting Markdown, Rust has given us a powerful, uniform convention to help us document our code. To really illustrate this, let's look at the documentation for Rust's standard library, std

We're currently looking at Rust's std or 'standard' library. Any project we create automatically have access to the entire standard library.

You should see a page that looks like this: 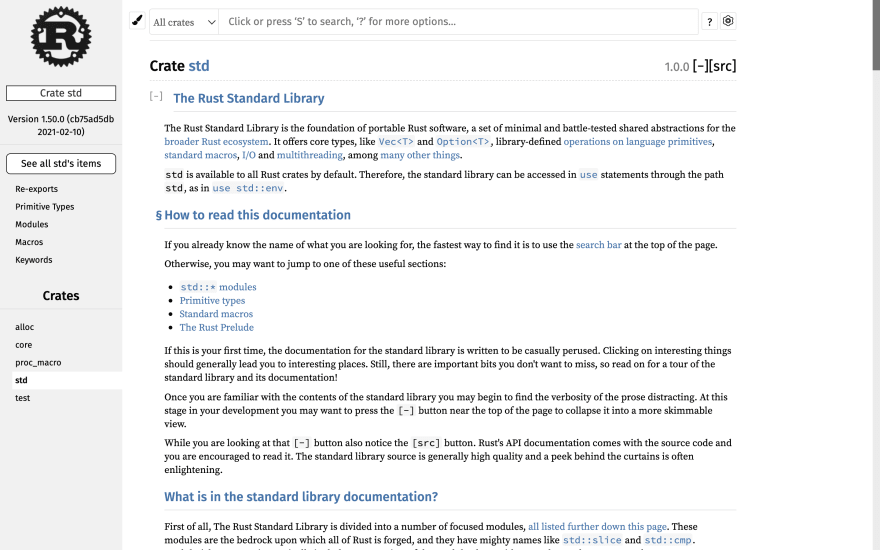 Do you see the [src] in the top right corner? I want you to open that link in a new window and compare the two, maybe like this: 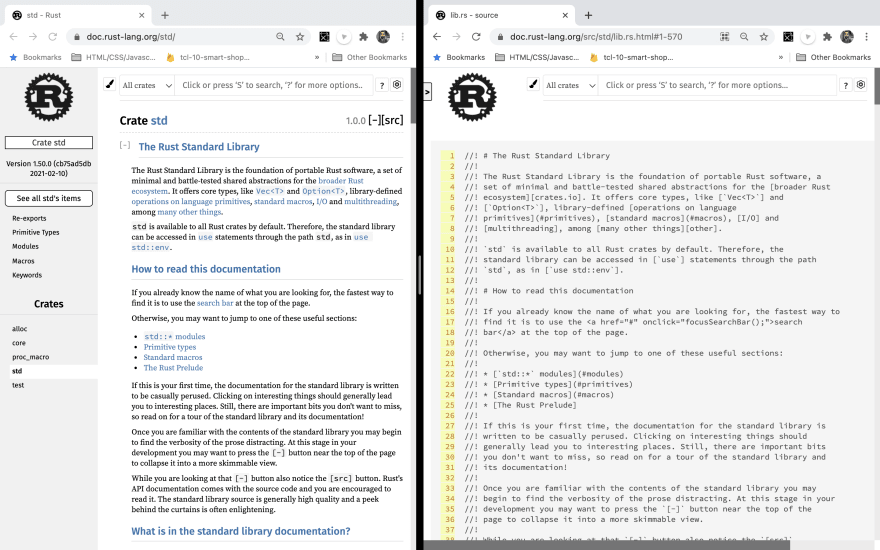 Do you notice anything?

Do you see how each line with Inner Line Documentation Comments looks similar to the std library's generated documentation from those comments?

We can even see some Markdown used in creating an unordered list:

Built into Rust we get a powerful convention for documenting the code we write!

You'll want to have Rust with the cargo package
manager installed on your local computer to get the
most out of this exercise, but you can also follow
along!

Check to see if cargo is installed by running:

Rust comes with a bunch of tools when you install it, one of them being rustdoc. rustdoc's purpose is to build documentation from our crate's entry point which is called our "crate root". When we build the documentation rustdoc turns it into HTML, CSS, and Javascript. rustdoc is a more low-level than cargo, and luckily cargo has commands that act as wrappers for rustdoc to make generating our documentation easier. If you want to learn more about rustdoc, you can look at the rustdoc book.

Now before we generate our documentation website, let's write a simple library with a couple of addition functions. Then we'll document it using all three types of comment!

Let's run cargo new addition_functions --lib to create our new Rust library. Then we'll run cd addition_functions. Open this in your favorite code editor and then open the ./src/lib.rs file and delete the code inside. 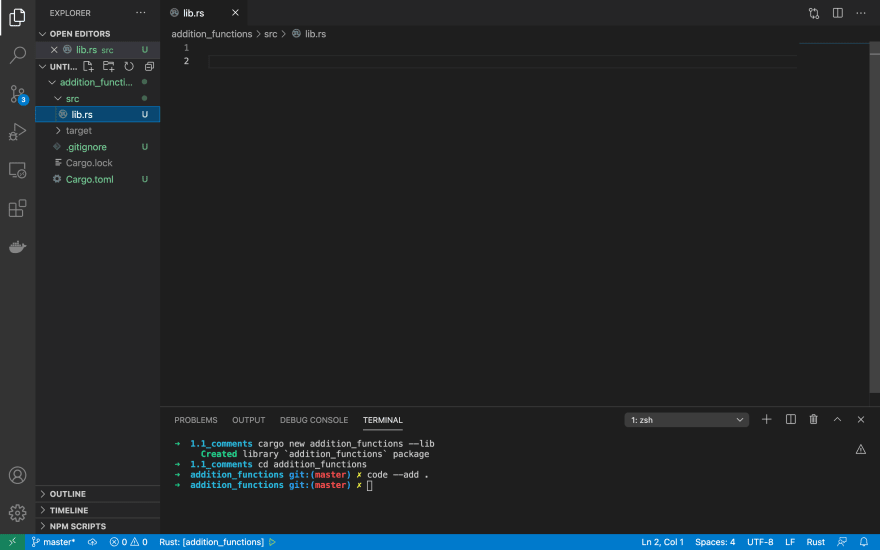 Congrats! You've just created a Rust library crate. A Rust library includes functionality that may be used by a binary crate or other library crates. For example, the std library handles the creation of built-in types for rust. We don't go off on our own and try to build an integer type, because it would most likely be a waste of time. Rust already provides us with multiple integer types in it's std library crate, so let's use them!

From here let's create a couple of functions. In [./src/lib.rs](http://lib.rs) we'll add this code: 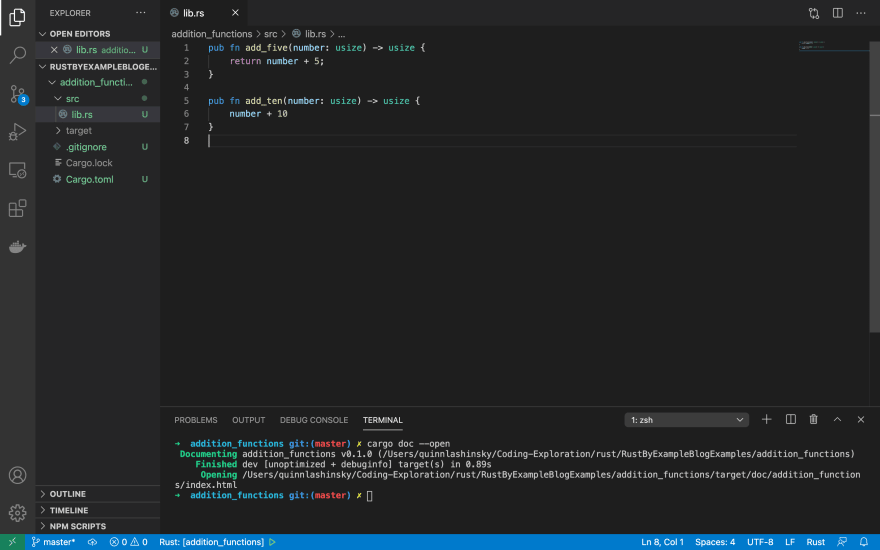 pub makes our function public so that it will be included in documentation.

And then we'll run cargo doc --open. This command will generate our documentation and open it locally in the browser. 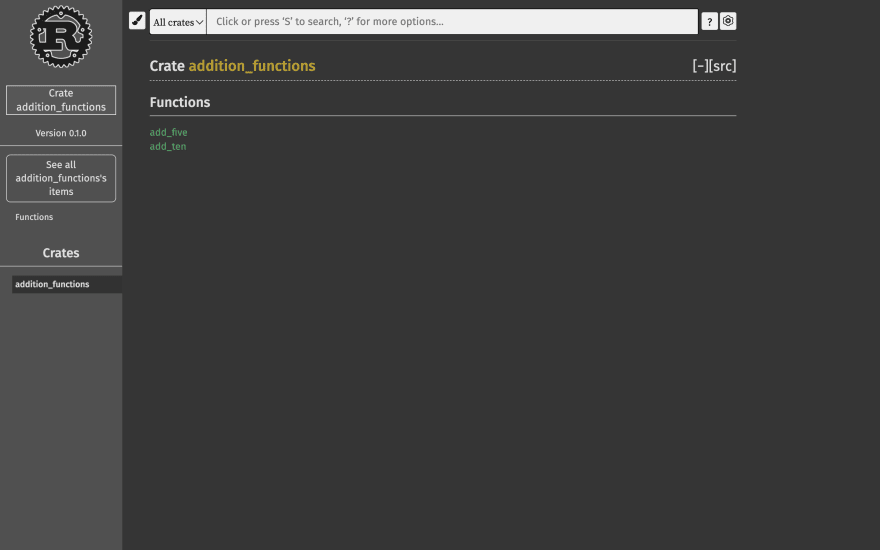 You can also run cargo doc to build documentation and not open it in a web browser.

When we use cargo, our documentation website is built within our ./target/doc/[name-of-library] folder, the entry point being the index.html file.

So we have our two adding functions, now we should write some documentation to describe how they work. Let's use all three types of comments to document the purpose of our library.

Our Inner Documentation Line Comments to document our entire library: 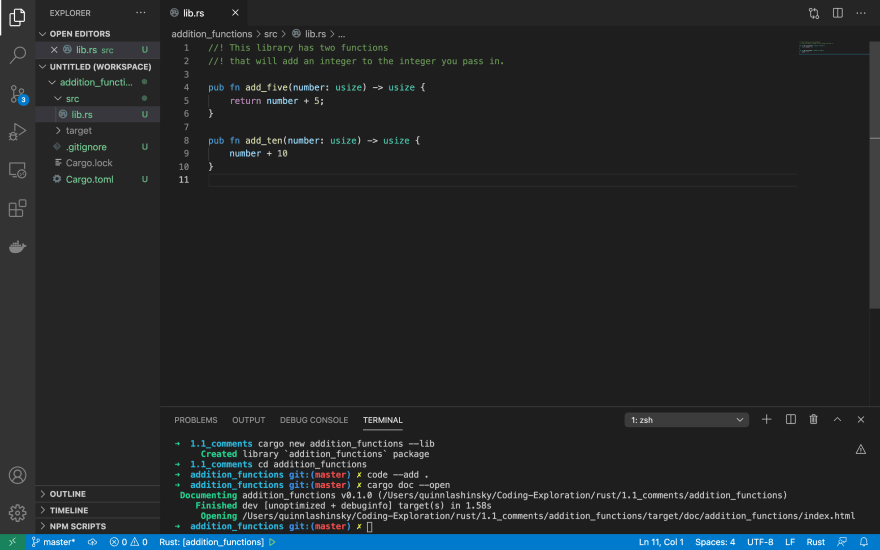 Our Outer Documentation Line Comments to document our functions: 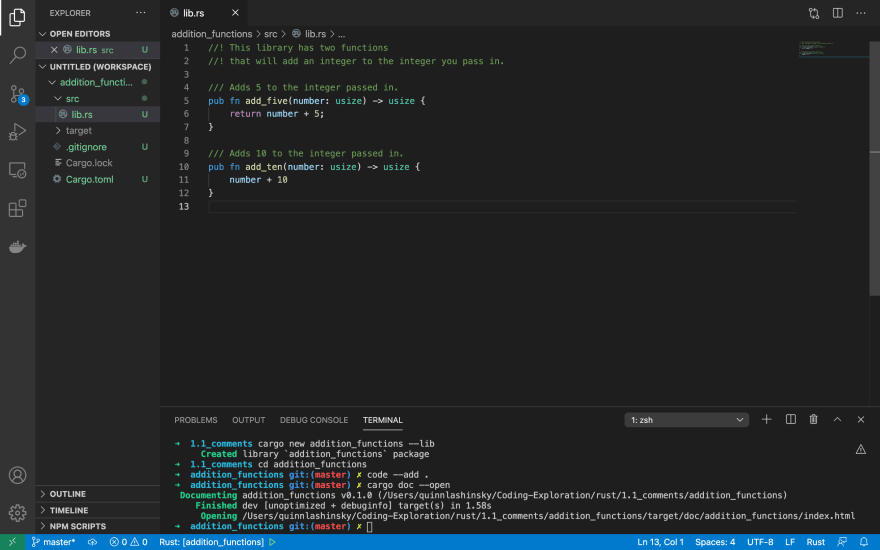 And finally some Regular Comments: 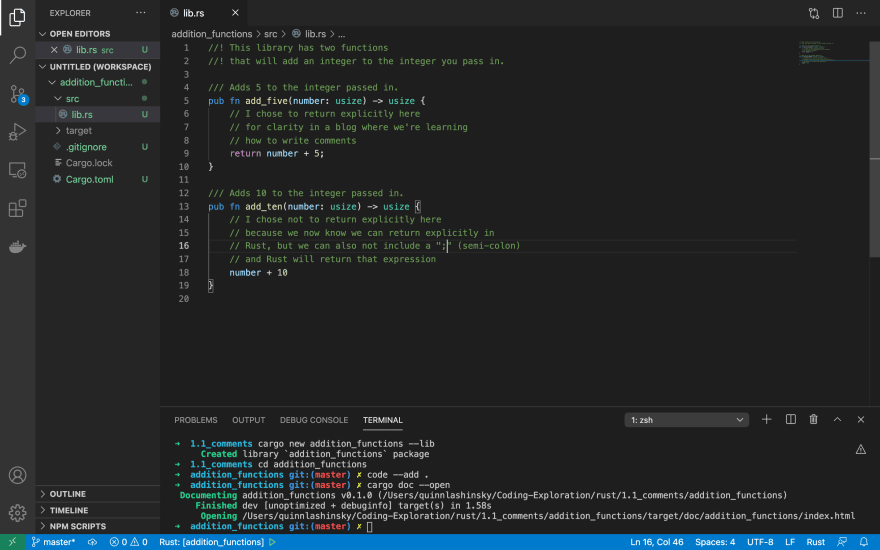 Here is a full code 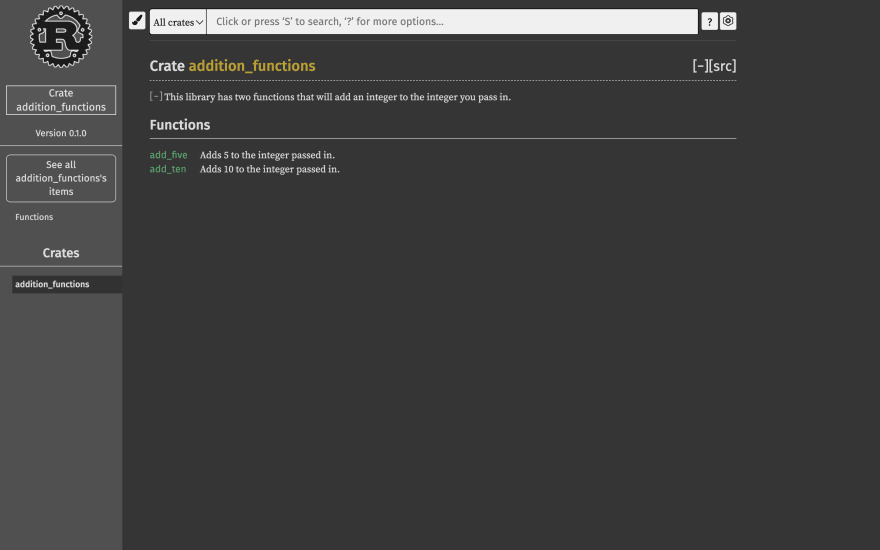 We can see our Inner Documentation Line Comments (//!) which describe the entirety of our library. This is because they are top level within our [./src/lib.rs](http://lib.rs) file. Rust convention dictates that we only use this type of comment to give an overview of our crate's functionality—a general explanation of what functionality our crate provides. 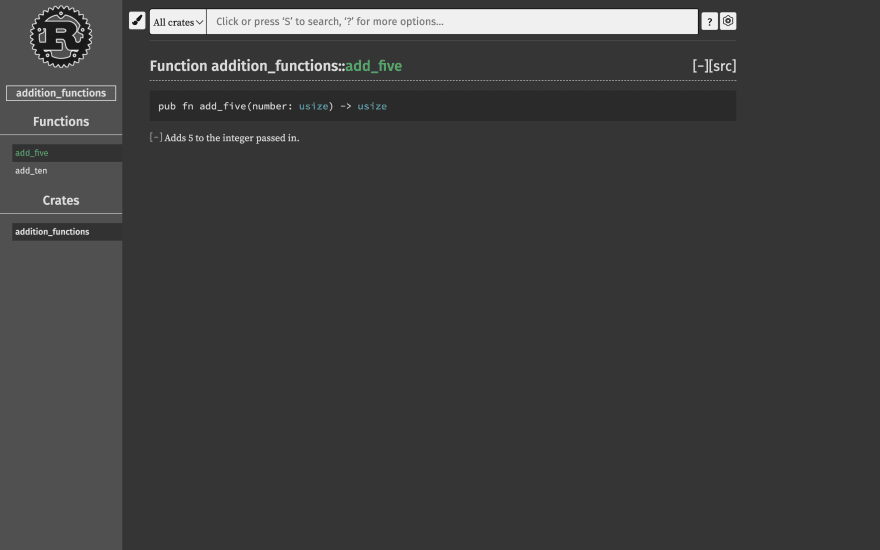 Now we see our function signature in addition to the rest of the outer documentation comments we wrote!

Finally, we'll check out our source code by clicking [src] in the top right corner. Now we'll be able to see our regular comments: 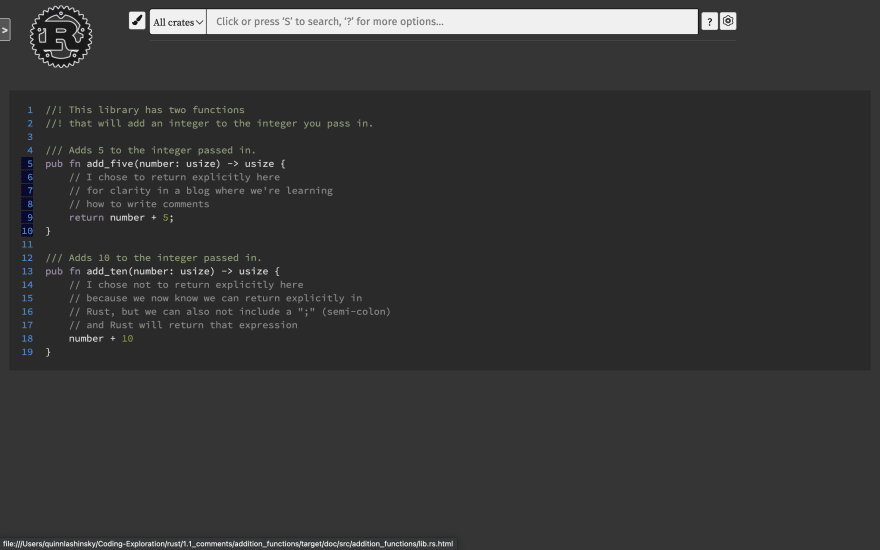 This is a lot. We haven't even gotten to understanding types in Rust, but it seems very intentional to me that Rust By Example teaches commenting just after "Hello, World!", its first section. Commenting is a way to bridge the communication gap between developers, whether we comment on a line of code or create documentation for an entire library. Comments create documentation in Rust, and documentation can mean the difference between spending 5 minutes on a problem or 5 hours. Rust has excellent documentation. As we keep learning let's take advantage of it. Let's apply the knowledge we've learned today to search documentation for answers and learn Rust as solidly as we can.

Now let's give our documentation a little flair and learn about some of the ways we can make it more explicit, give it some minimal Markdown styling, and even some alternative syntax.

Both inner and outer documentation comments are syntactic sugar for the built in [doc=""] attribute. We can use them interchangeably like so:

Rust crates include some common headings as convention (Errors, Safety, Example) we can use to describe how our code may behave in common use cases. Let's create an Examples header for our add_five, write a code example, and then test it.

Using Markdown syntax we can create a heading and called "Examples" above our add_five function. Let's see what that looks like:

Markdown will default to Rust, but it never hurts to be explicit about the language we are using.

From here, let's use the assert_eq! macro to see if our function is working as intended. If the two arguments we pass in are equal, the test will pass. Otherwise, it will fail.

Now if we run cargo test --doc, we'll only run our documentation test cases. In our console we'll see if the test cases passed or failed. 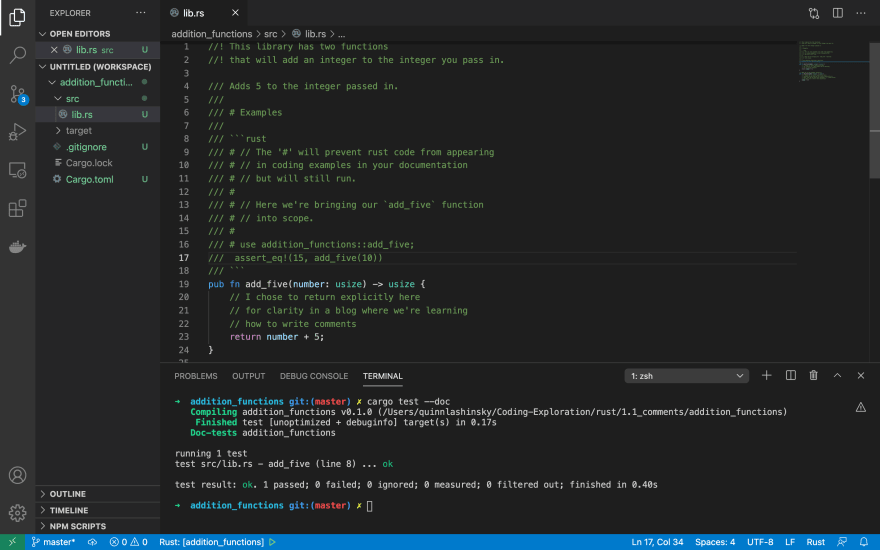 If you're feeling up to it, why don't you write some simple Example documentation for the add_ten function like we did above, for practice!

Here's a handy table to remember all three types of comment, whether they are in line or block ****form.

Why GitHub Profile Should Awesome ?

Once suspended, qmaximillian will not be able to comment or publish posts until their suspension is removed.

Once unsuspended, qmaximillian will be able to comment and publish posts again.

Once unpublished, all posts by qmaximillian will become hidden and only accessible to themselves.

If qmaximillian is not suspended, they can still re-publish their posts from their dashboard.

Once unpublished, this post will become invisible to the public and only accessible to Quinn Lashinsky.

Thanks for keeping DEV Community 👩‍💻👨‍💻 safe. Here is what you can do to flag qmaximillian:

Unflagging qmaximillian will restore default visibility to their posts.