Hello, my name is Ramil and I work as a frontend developer and write code on React for several years. I once read that one of the characteristics of professional programmers is

And this prompted me to implement the idea that I want to share in this article.

As a rule, when writing components in React, we often need to perform the same repeatable actions. On the one hand, this is good, because in this way a single code style is formed, on the other hand, this means performing monotonous and routine work, which we would like to avoid.

Not so long ago, when working on one of my project, I ran into a situation familiar to everyone. In order to create a next component, I need to make few steps:

So after googling and finding great article from Mike Theodorou I decided to supplement a bit his examples and share it with you.

So, the main requirements for the script to automatically generate a folder with files for the React component were:

Let's start from file with constants:
DEFAULT_COMPONENT_BASE_PATH - this is the path to the folder where components will be created by default, if no other path was specified
FILES_DATA - an array of objects, in fact our main config, where we indicate which files we need and which template to use for this. In this case we want to create 4 files.

Since we've touched on the topic of templates, let's see what a template file looks like. There are no complications here, we just export functions that substitute variables using template strings

Working with the command line

Further, in order for our script to request information from the user, we can use the built-in Node.js module called readline.
To use it, in our case, we need 3 steps:

Following the single responsibility principle, I decided to combine all the work with the readline module into a Readline wrapper class, where I added public methods to call the question and close methods.

In order to make the code of our main script as clean as possible, I decided to decompose the code and move some functions outside of it.

And finally, we need an entry point. This is a main script file in which we will combine all our logic and the same script that we will run to autogenerate files for React component from command line.
I didn't add a large number of checks and other things. Here is only a basic check to see if such a component already exists, and if not, then create a directory and generate component files.

That's all, now it remains to run the script. My folder with this script is in the root of the project with the following structure: 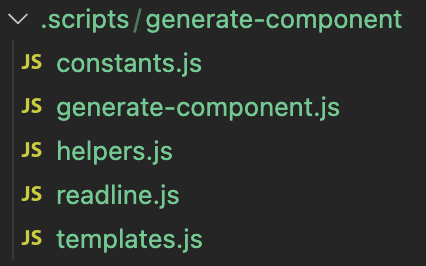 To start, I only need to run the generate-component.js script file using Node.js. In my case it will be like this:

If desired, the script call can be placed in a package.json file in scripts section:

Final gist with all files you can find here

It was one of the options for solving this problem. Of course, there are already ready-made npm packages for this, but I wanted to try to write something of my own and simple, and I think that this was quite successful. Finally, I would like to note the idea with which this post began:

if possible, try to automate routine work. This will either save you time in the future, or at least give you a good programming experience.