Recently I wanted to learn Phoenix LiveView, an Elixir library based on the Phoenix framework to build real-time applications.

Its main characteristic is that it renders the HTML on the server side, allowing the application to be written entirely in Elixir (though it can't replace Javascript for every use case, and still rely on it to set up the websocket and update the DOM).

Anyway, I've got my eyes on it ever since it was announced, but never got the time to actually try it. I finally found that time and to learn it, Idecided to make a Boggle clone: Letter Square.

Let's talk about what I learned in the different steps of its 3 weeks-long development.

Before diving into LiveView, I programmed the rules and some helpers for the game itself. That includes generating a grid of letters, finding the words in it (from a list of words) and computing the score.

Finding words inside a grid

As an algorithm lover, that was one of the most fun parts for me. The general idea of the algorithm I implemented is the following:

In order to efficiently check if a word is in the dictionary, or if any word starts by a given prefix, I used a trie. I found Retrieval, a tiny Elixir library that did just what I needed.

It was working just fine, until I deployed it on my free Gigalixir instance, limited to 500MB of memory. Loading the 5MB dictionary and turning it into a trie turned out to use a bit too much memory.

I found an elegant solution for that: load the dictionary by chunks. For every chunk, I can see it as a smaller dictionary and use the algorithm from above to find some of the words. Then I repeat for every chunk until I have covered the whole dictionary. Using a Stream, doing that was dead easy, and I didn't even have to update my initial function:

My first implementation for the random generation of the grid was pretty simple: each letter was chosen independently, and the probability of a letter being chosen depended on its frequency in the language.

Using this technique, I quickly faced a problem: the number of words to find was often very small, making the grids too hard and not very fun. Many grids had too many consonants not connected to any vowel.

So I tried another technique. Instead of generating letters independently, I generate random paths of letters inside the grid. The first letter of a path is chosen completely randomly, but the next ones are chosen depending on the preceding letter in the path. The probability is based on the frequency of bigrams (pairs of letters), computed from the dictionary. Using this technique, I make sure that letters which are likely to be found next to each other in the dictionary are also more likely to be together in the grid.

This is a quite complex technique but it paid off as the average number of words per grid took off (though I did not measure it). Very long words became also much more frequent.

Another thing that I didn't expect to be a challenge, but actually took me an entire evening, is finding a good list of words to use as dictionary.

Some official list of words used for Scrabble can be found online, but it seems they cannot be used freely. Other lists can be found here and there on abandoned web pages and repos, but it's never clear how good they are, and they often come in weird or annoying formats (e.g. XLS). In the end I used one from this GitHub repository but I'm still not convinced of its quality.

After that I implemented the behaviour of the interface with Phoenix LiveView. Apart from a few hiccups, it felt very easy and comfortable. I loved being able to do everything only in Elixir, without having to care about JavaScript and building an API to link the two, which would have been much more complex. In the end, I even wonder if I did not spend more time trying the get the CSS right.

I also did not use "vanilla" LiveView, as I used the Surface library. This is a wrapper around LiveView that brings a whole new syntax to make the experience even more comfortable.

As an example, here is the code of one of my components, that displays the remaining time: 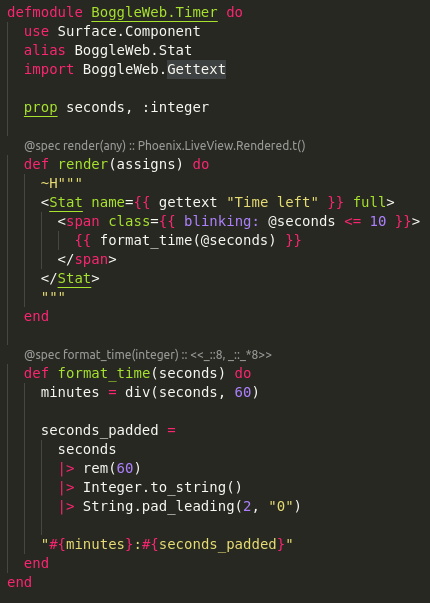 As you can see, Surface brings the ~H sigil for the template, which allows to use a syntax very similar to Vue, using {{ }} for Elixir interpolation. I've never liked Phoenix's syntax and always preferred Vue-like syntax, so that immediately convinced me to try Surface.

Like Vue, loops and conditions are done with special attributes inside the HTML tag, instead of outside, preventing additional levels of nesting.

Properties, internal data, slots or events are defined on top of the module, which makes them instantly visible. The component's name can then be used in other components, just like the Stat component from the example. Here again, it is easier and more expressive than the LiveView way, which would be:

While Surface allows me to do just:

Given how young both LiveView and Surface are, I am amazed at what they achieve together and I can't wait to see how they will evolve.

What could have been better

There were a few things that made me lose a bit of time:

For deployment, I used the free option of Gigalixir. As said before I was limited to 500MB, which made one part tricky. But for the price, that's quite a lot already.

I have very few things to say about it except that it was a breeze. In less than an hour, I had my application running, and updates were just a git push away. I also got easy access to the logs and a console to monitor the CPU and memory access.

I had one tiny issue because I followed the Deploying on Gigalixir documentation of Phoenix, that does not mention that you can give the app a name (and a region). So I got a default name quirky-barren-canvasback (which is used in the URL) and had no choice but to destroy the instance and create a new one just to change the name.

In conclusion, that was a great experience and I can't wait to do more projects involving LiveView and Surface. None of the issues I stumbled upon were huge blockers, and most of them are probably due to the fact that both projects are still quite young. I have no doubt that they will keep getting better and I hope to be able to contribute at some point.

Failing to parse Elixir with Megaparsec

Colin Smetz
What was your win this week?
#discuss #weeklyretro
Where There is Code There Should be a Review (but Why?)
#codequality #programming #discuss #career
🧵 Rate my GitHub Profile
#discuss #watercooler