TypeScript is a superset of JavaScript. This open-source language builds upon JavaScript and adds new features which are advantageous to developers. It was developed by Microsoft and first released to the public in 2012. TypeScript can't be executed by browsers or other JavaScript environments. Instead, TypeScript code must be compiled to regular JavaScript first, which some might say is a disadvantage. However, this compilation phase adds some advantages such as error checking.

TypeScript technically is transpiled to JavaScript. Transpiling code means to change it from one language to another at the same level of abstraction. Where as compiling code is changing it from a higher-level language to a lower-level language. For example, the language Go is compiled to machine code. Transpiling TypeScript to JavaScript enables developers to use new features that compile to JS workarounds. For example, take a look at this TypeScript code and its corresponding transpiled JS code: 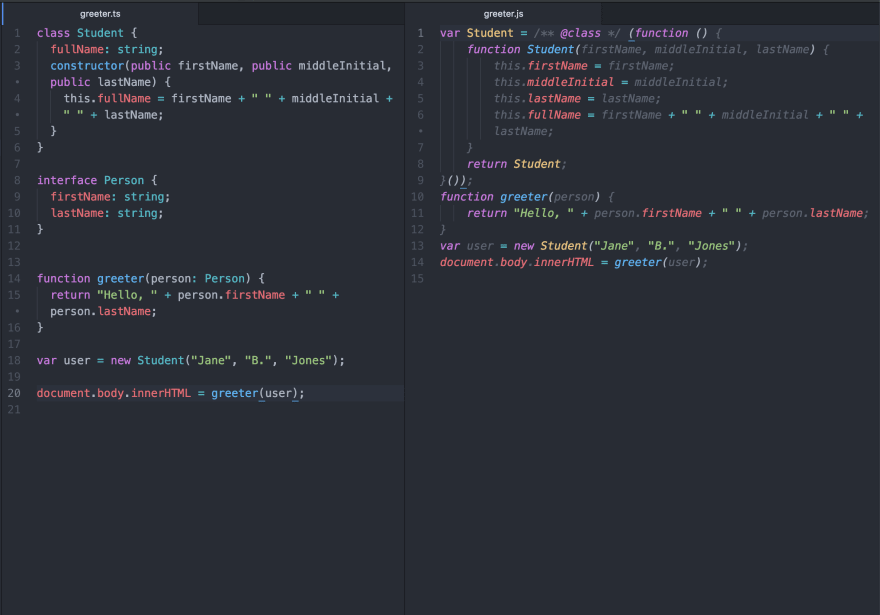 The code in this screenshot was taken from the TypeScript website's quick tutorial. You can see that the compiled JS code is much more lengthy and not as clear. An additional feature of TypeScript is that if any errors are present in the code, the errors will be displayed for the developer during compilation. For example, if a function is called with no parameters and is expecting a string as a parameter, an error will be thrown saying, error TS2554: Expected 1 arguments, but got 0.. TypeScript will also show the exact line of code and spot within the line where the error occurred:

TypeScript allows developers to use static typing. It isn't required, but it allows developers to catch errors on compilation. For example, if you try to pass an array in as an argument to a function that is expecting a string, this error will be thrown: error TS2345: Argument of type 'number[]' is not assignable to parameter of type 'string'. Here is an example of how typing is used in TypeScript:

Here are the types you can use:

Types are optional with TypeScript, and they can be inferred during compilation.

If you would like to install TypeScript and try it out yourself, here is the command using npm: npm install -g typescript.

When you write your TypeScript code in a .ts file, run tsc {your-file-name_here}.ts in your command line to compile it to JavaScript. When it's done compiling, you will see a new .js file in your directory with the compiled JavaScript code.

Let me know if you have used TypeScript before and what you think about it. Thanks for reading and I hope you're all staying safe out there!

How to Be a Good Remote Developer