The Radix Team assembled from across the globe for our quarterly Team Planning Week at the beginning of this month. Nestled away in the Peak District, amongst the quaint hills of the North of England, we kicked off 5 days of in-depth strategizing and planning for our launch later this year. We dedicated one full day to an internal hackathon, had a lot of fun and pushed ourselves to create useful applications utilizing the Radix Stack.

In the hackathon, I was part of the DecentraSign team which also included Maciej, Albert, and Leroy.

We realized that the modern world challenges the current ways of how we approach data and its verification. With this in mind, we created a rudimentary platform within a working day that would showcase how to use some of the inherent features of Radix to sign, verify and authenticate documents between two people. This product, DecentraSign, is similar to DocuSign, but runs on the decentralizedRadix ledger. As such, we believe it brings a number of benefits in comparison to current centralized offerings.

The Problem with the Current System

Our original discussions centered around these current systems and we came to the conclusion that the modern world challenges how we approach data verification.

Despite the digital age, documents retain an important role in the world. A piece of paper bearing an individual’s signature still carries an inordinate amount of power. A scrawled name confers ownership over property and assets, authorizes recipients to implement actions such as transferring money from person A to B. As such, verifying agreements and the time at which they were made is of the utmost importance.

This is further complicated by changing user expectations. For example, we now expect to be able to verify ourselves instantly online, but solutions remain broadly linked to legacy systems such as:

-Company identification numbers, backed by a document from a national registry

These systems are susceptible to fraud – witness the availability of fake passports or forged signatures and documents – and are also time consuming. This increases costs, while also making the process vulnerable to errors.

How can Radix improve this situation?

Radix provides for an immutable ledger, building on the technological breakthrough brought about by the first blockchain, Bitcoin. This allows for:

-Time-stamping- Proves when a particular ‘thing’ was signed or authenticated

-Immutability– The data, once signed, cannot be changed or tampered (unlike signatures or physical documents)

-Share ownership/counter-party - People can jointly own or update entries

-Additional options – For example, there is the possibility of adding a memo or text alongside the signed document or transaction

The immutable Radix ledger removes the threat of alterations or forgeries and can be used to prove who signed what and the exact time it was signed.Transactions can be signed by anyone, anywhere in the world. Furthermore, they leave a clearly auditable trail on the public ledger.

This combination of features means that middlemen extracting fees through acting as a trusted third party in deals between parties, such as notaries, lawyers, banks or companies such as AirBnB, can potentially be eradicated (at-least partially).

We were successfully able to send and verify document hashes between two people.

Hashes and timestamps are the basis for a plethora of other interesting utilities for a public ledger - such as creating an identity database, copyright registry and much more. We think these basic building blocks could be used for a range of use cases including:

Time-stamping and immutability can be of great use for IP related issues.

Copyright - for a piece of work to be copyrighted it needs to be individualized and creative. Copyright is intended to prevent plagiarism, but while certain jurisdictions (such as the US) have a centralized registry, many countries don’t – such as much of Europe. Given this issue, DecentraSign could help to timestamp a certain piece of work. In the event of a conflict, this could be used to verify the original creator.

Patent - patents are much more complicated from a technical point of view and the road to acquiring one is difficult. As this process can be lengthy, there is always the risk of another party trying to patent a similar solution first. DecentraSign could provide the ability to show without doubt that the specification you are trying to patent existed at a certain point in time.

Registered Community Designs - RCD’s sit somewhere between trademarks and more technical IP solutions such as patents. Their focus is, as the name suggests, on design. This could be, for example, a distinguishable armchair. A registered community design theoretically should be new and individual but these features often go unchecked by the body responsible for registering the design. This can lead to a situation in which everything goes and no central authority is checking if a certain design has been already used in the past. We believe Radix can be used in such a scenario to prove the existing creation and sale of a certain design? By using a solution such as DecentraSign, these proofs of creation and purchase can be recorded on the Radix ledger.

We envisage that DecentraSign could also be used to authenticate individuals. A public, immutable ledger with a hashing/time-stamping feature could be used, for example, to create a national registry. Each individual could have a unique hash with these recorded on the Radix ledger. This solution could even be used globally, as an equivalent to ID cards or passports.

It could also be used by companies, who could secure ID badges and usernames from potential hacks by using a ledger instead of a centralized database. Internet based companies could use it instead of usernames to log in.In such a way the individual’s name would be separated from the hash, meaning that even if a set of data relating to a hash was leaked, there would be no way to then associate that hash to an individual.

Property Authentication/History
When creating DecentraSign we also thought of additional use cases relating to authentication as opposed to verification. This use case also has a lot to do with IP infringement. For example:

Want to build your own decentralized document signing application?

Get the DecentraSign source code from this GitHub link and start hacking away!

‍
Ask them in our telegram channel (https://t.me/radix_dlt) or discord group (https://discord.gg/CZ6WMfW).
‍
You can also stay up to date via our mailing list - https://radixdlt.typeform.com/to/nyKvMV?source=DecentraSign 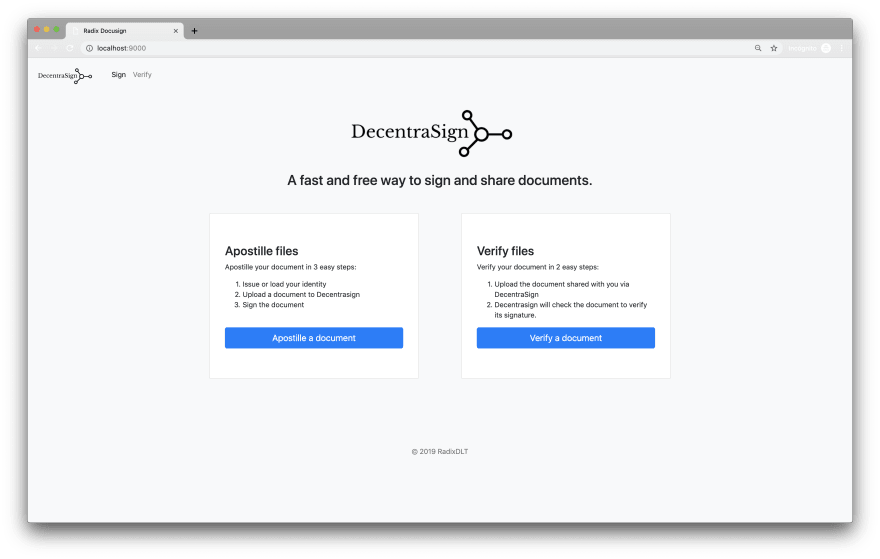 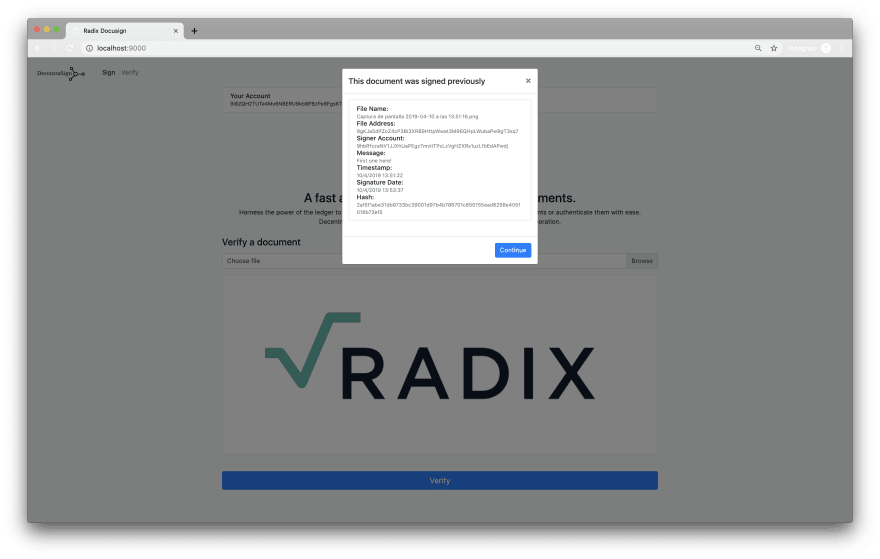 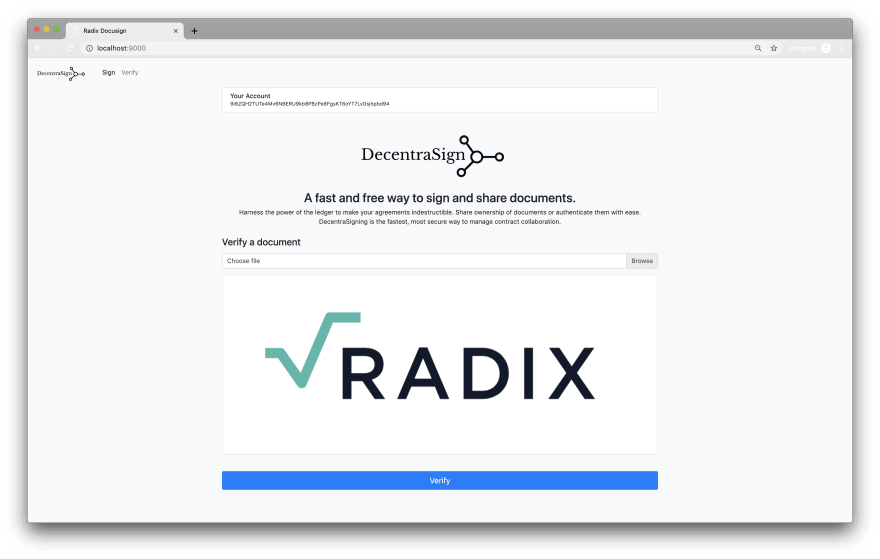 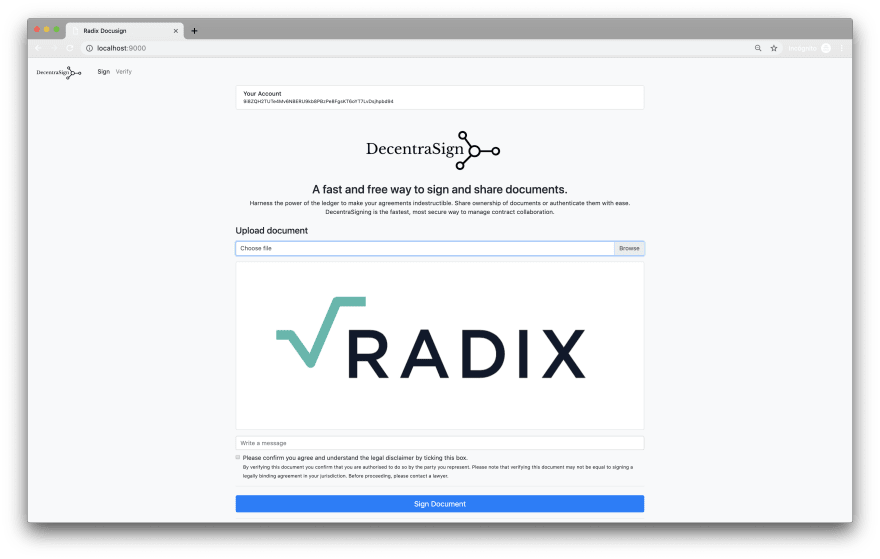 It’s Time To Get Your Writing on the Blockchain With dArticle.io

Thanks for keeping DEV Community 👩‍💻👨‍💻 safe. Here is what you can do to flag radixdlt: