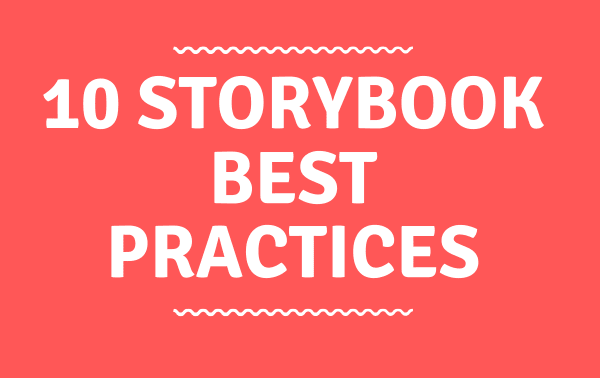 This is a post about Storybook and conventions. It is based on my experience using Storybook over several years and from the experiences of other developers. The best practices I define here aren't silver bullets that will fix and improve every project. They're a baseline of ideas and conventions that I think are worth trying. Hopefully, they can help you and your team have a better developer experience and ultimately deliver better software to the world.
I assume you know what Storybook is and that you have some experience with it. The ideas here can be applied to apps of any size and are not particular to any specific framework (e.g. React or Vue), but I wrote them with a large app in mind with a large team and multiple contributors.

1. One Storybook File Per Component

The story file should have:

The default story displays the component with only its required props defined. It creates a visual baseline representation for everyone. So, ideally, when people think about a specific component, they will remember what's reproduced by the default story.
The playground story is used to help consumers of the component try different combinations of props and see how the component responds. This can be implemented in Storybook version 5 and below using the knobs add-on. You provide knobs for all props of the component:

For the latest version of Storybook (version 6), the playground story can be written using the new Args feature. It looks something like this:

Finally, the other stories should reflect a specific state or API of the component. For example, if we have a button component with a type property that accepts the values primary, secondary, tertiary, or error. Then, we would have four stories: Button/Primary, Button/Secondary, Button/Tertiary, and Button/Error. There are a few reasons to follow this pattern:

2. Co-location: A Storybook File Should Stay With Its Component

Name the storybook files [ComponentName].stories.[js|jsx|tsx]. Honestly, the important thing is that you and your team agree on a naming convention, and everyone follows it. I like to include the name of the component in the file name because it makes it easier to find in the code editor. Otherwise, I could end up with five files called index.stories.tsx, and then I'd have to open each one or perform a search to find the right one.

4. New Components Must Have a Storybook

It helps to create a library of components and gain the benefits of having one. If your team has a PR checklist, Storybook could be one of the items to check before merging the code into master.

Component Story Format or CSF is the recommended way to write stories according to the Storybook maintainers. It's basically a set of conventions to be used in the story files. Instead of using the storiesOf API, you write regular JavaScript functions and export them. Storybook converts the named and the default exports to stories. One big advantage of the CSF format is that the code looks cleaner and is easier to read. Instead of the Storybook boilerplate, you can focus on what your code is actually doing.

6. Architect Stories as You Architect Your Codebase

When you use Storybook, you should have a clear idea of how your app is organized. I got this from Loïc Goyet in the awesome post How I manage to make my Storybook project the most efficient possible. His idea is to make the stories menu reflect the location of the stories in the app: 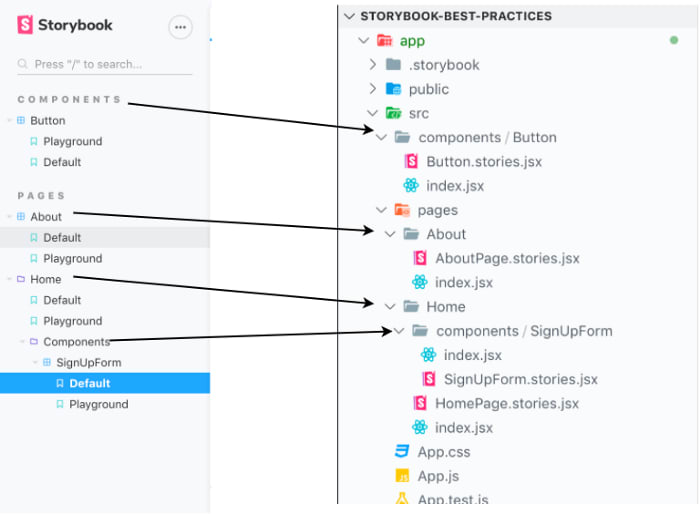 Do you see how the menu in Storybook above aligns with the app folder structure?
This structure will help you to:

If co-location is used in your app, keeping related items together, the folder structure gives you an idea of how the app is structured. But do not confuse folder structure with architecture. They're not the same thing.

When we develop in Storybook, we want isolation, but it is very likely that we still use some resources shared with the app, such as images, data, CSS, icons, translations, etc. And, this is good because we want to make sure that our components will behave in the same way when used in the context of the app. For example, if a localization library is used in the app, it can probably be reused with the same configuration inside Storybook. Another example: If third-party CSS is used, it should be included inside Storybook because we want to determine if that CSS will conflict with our CSS. The objective is to avoid surprises when using the component in the app.

If you notice that you need the same data in many different stories, it may be good to create a mocks folder and add JavaScript files that export factory functions that will create reusable data. Let us suppose that we have an avatar component that displays the user image, name, anchor, and this component is used in multiple places. We could have a file named mocks/user.js which has something like this:

Why the factory function? To make sure we are getting a new object every time. If we imported an object, we could accidentally modify it and cause wrong results. I have seen it. Also, here I'm using Object.assign as an example, but you may need something more sophisticated that handles the merging of arrays and objects. Lodash and RamdaJS have functions for that — RamdaJS is awesome!

9. Create Your Own Decorators and Add-ons ( When it Makes Sense)

Decorators are basically functions that wrap another piece of code and give it extra functionality. In Storybook decorators can be applied to individual stories (called Story decorators), all stories of a component (called Component Decorators), or to all stories in the project (called Global Decorators). The baseline is this:

It is common in React apps to have providers wrapping the app or portions of the app. If you need, for example, to wrap your components in a provider, a decorator is the way to go. Or, if you want to add a margin to some component so that it does not touch the borders of the canvas, you could have a decorator like this one:

Add-ons are extensions to Storybook that can help you to configure and extend Storybook in many fancy ways. It's more involving to develop add-ons, but it's not hard, and you have more power and flexibility.

10. Take Storybook Use and Maintenance Seriously

Storybook can be of huge help in developing a UI because it encourages you to focus on the interface of your components, which will help you have more generic and lean components. Generic and lean components are flexible and can be used in different contexts. In the end, you may need fewer components if you have some flexible components. Fewer components mean less code; less code means less chance of bugs; less chance of bugs means happier users and happier developers. So, maintain and keep Storybook running and well oiled, don't let broken stories stick around, and refactor and rearrange things when they get messy.
In my experience, things only are improved when people take ownership. If there's no group of people responsible for taking care of Storybook, it won't be easy to keep it evolving and benefit from using it. Everyone is responsible for contributing and following the team's conventions, but it may be helpful to assign someone, or a group of people, as a Storybook maintainer. The Storybook maintainer can hold others accountable for following the conventions — they can improve the use of Storybook in your team.

I collected some ideas after using Storybook for five years and from the experience of other developers smarter than me. I truly hope you learned something new and are excited to try Storybook or make it better for you and your team. If you have any questions or suggestions to make this article better, let me know in the comments below.

Once suspended, rafaelrozon will not be able to comment or publish posts until their suspension is removed.

Once unsuspended, rafaelrozon will be able to comment and publish posts again.

Once unpublished, all posts by rafaelrozon will become hidden and only accessible to themselves.

If rafaelrozon is not suspended, they can still re-publish their posts from their dashboard.

Once unpublished, this post will become invisible to the public and only accessible to Rafael Rozon.

Thanks for keeping DEV Community safe. Here is what you can do to flag rafaelrozon:

Unflagging rafaelrozon will restore default visibility to their posts.