After my lecture on Vaughn Vernon's "Implementing Domain-Driven Design.", I've decided to write a post which will be connected with DDD and draw attention to the underestimated Value Objects. In my experience, developers are abusing Entities in their projects. Very often that behavior ends with an occurrence of many anemic domain models without or with little business logic. In my opinion, some of the anemic domain models could be quickly transformed into the Value Objects.

Note: All examples are written in C#, and they are using newest C# syntax. I hope they would be easy to understand also for developers who are using different languages.

Let's start with the simple example of a Car entity like in the code snippet below.

We will focus on properties related to car's color. I mean Color and Metallic property. For simplification, color is represented by string type.

Characteristic of the Value Object:

1) Measures, quantifies or describes the subject of a domain

In our example, Color and Metallic are the best candidates for the Value object. Both are describing the look of the vehicle. So extract the new class:

Whenever Hue or Metallic changes we receive a new color, so let's go to the next point.

Immutability means that object state cannot be changed after it's initialization. In Java or C# this could be achieved by passing all parameters to the constructor of a value object. Based on the values of parameters state of the object will be set up. Of course based on values some additional properties could be calculated.
Notice: The object itself can't call property setters either by the public, nor the private methods. This is forbidden.

Let's enhance our example according to previous thoughts.

In the example above we've calculated the BasicPallete property. For example, it could influence a car's price calculation.

Worth is a perfect example cited often by this point. Let's take 100 USD as an example. Currency and amount are linked together. Let's imagine that someone has changed the currency from USD to MXN (Mexican Peso) in our object. That change has the significant impact. 100 MXN is worth approximately 5.25 USD. Oneone wants to be a victim of such a small change.

4) Is replaceable in the situation when the measurement changes

In our case car is an entity and color is a value object in our domain. Someday we decide to change the color of our car. Let's say we've bought a green non-metallic vehicle, but after a few years, we want to have a green metallic one. We cannot just add metallic gloss to existing painting. We need to repaint it with the new green metallic paint.

5) Could be compared with other value objects

In languages like C# when we try to compare two objects by default, the comparison covers the location in memory of two objects (called Reference Equality). Two objects can have the same property values, but the will not be equal. This is the wrong assumption regarding the Value Objects. In that case, we need to have equality of given type and all property values (called Value Equality).

So let enhance our class and implement the Value Equality:

This is the fundamental rule. Without it, Value object could be treated as a simple container for attributes. To understand it we should start with understanding side-effect-free function. Function without site effect has a result but doesn't modify its state. Such a function are fundamental in Functional Programming Paradigm.

All methods exposed by a value object should be a function without side effect, which doesn't violate the value object's immutability.

Let's take the car's repainting example. We can achieve repainting by adding such a function to our class.

As we can see, there is a similar effect like in car's repainting case. But the connection between method and value object is stronger and side-effect-free. We don't modify the state of the color object. Instead of that, we've created the new one with demanded values.

Of course, I didn't cover all topics related to Value Objects, all the more DDD, but I hope this post will inspire you to use it more often in your projects. 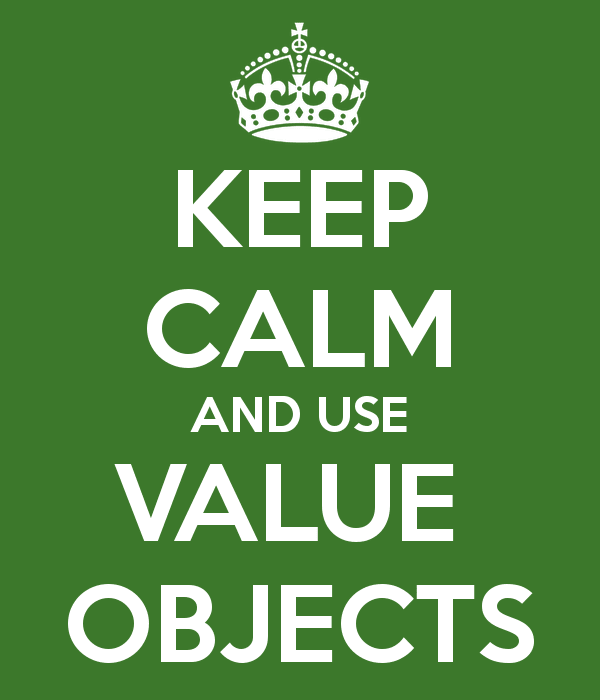 Please don't go from one extreme to the other.

How to Be a 10x Software Engineer

Rafal Pienkowski
I'm focused on developing and expanding my knowledge and skills. Enjoying new challenges. I'm assuming that there are no stupid questions, there are only silly answers.
My DDD journey
#ddd #programming #architecture #learning
Turn VM off and give my money back
#cloud #azure #devops #architecture
Microservices by example with DevMentors
#microservices #architecture #opensource #ddd

Once suspended, rafalpienkowski will not be able to comment or publish posts until their suspension is removed.

Once unsuspended, rafalpienkowski will be able to comment and publish posts again.

Once unpublished, all posts by rafalpienkowski will become hidden and only accessible to themselves.

If rafalpienkowski is not suspended, they can still re-publish their posts from their dashboard.

Once unpublished, this post will become invisible to the public and only accessible to Rafal Pienkowski.

Thanks for keeping DEV Community 👩‍💻👨‍💻 safe. Here is what you can do to flag rafalpienkowski:

Unflagging rafalpienkowski will restore default visibility to their posts.