If your browsing habits are anything like mine, you likely have seen online advertising from a company called Antsle. But just in case you haven't, allow me to introduce you:

Antsle provides products to enable users to run their own "private cloud". Why exactly does that mean? Well... if you cut down to the meat of it, they sell hypervisor appliances running Antsle's web-based management software called antMan.

I've been keeping my eye on the company and their offerings for a while now, wondering if I could effectively replace my Digital Ocean, GCP, and/or AWS accounts with a cheaper Antsle-based solution for my personal use. Up until now the cost has kept me away, but recently they released their newest appliance called Antsle Nano, a significantly cheaper solution based on the Raspberry Pi 4. So I pulled the trigger and spent the last two months or so playing around with my Antsle Nano to see what it's capable of. 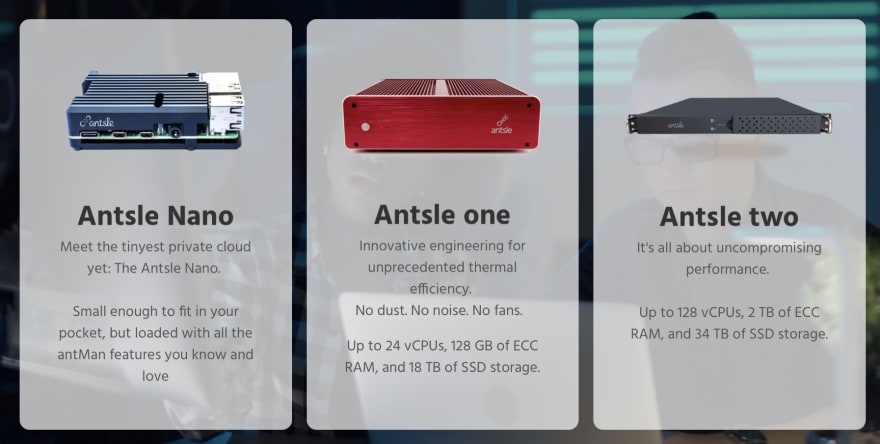 Antsle one is the evolution of Antsle's original product line. They are effectively silent, fan-less servers in a small box that could easily fit on your desk/shelf. The hardware platform itself is based around the Intel Atom or Intel Xeon-D processor (depending on your selection), and is similar to the hardware found in many NAS devices sold by companies such as Synology. Prices range from $1000 up to $6500+ USD. While I haven't personally used an Antsle one device, the hardware choices available make sense for anyone looking to have a tiny, yet reasonably powerful and silent device.

Antsle two is Antsle's rack mount offering, and is clearly marketed towards business users rather than home users. Much to my surprise (and delight), Antsle two devices run on AMD's EPYC platform rather than the more widely seen Intel Xeon platforms. Given my focus to find a low-end home lab solution, buying an Antsle two device was never really a serious thought of mine. But for those curious, prices run from $3,500 to $50,000+ depending on the configuration.

And finally... there is the Antsle Nano. As I mentioned earlier, the Antsle Nano is based on the Raspberry Pi 4. The prototypes shipped out to early adopters were based off the 4GB variant of the RPi 4, but it seems Antsle has decided to use the 8GB variant for the final version. Business users likely will want to stay far away from the Antsle Nano—but for home lab users such as myself... it is a very compelling device. Antsle's version of the Raspberry Pi 4 ships with a beefy heat sink pre-installed, plus the typical USB-C wall-wart power supply and a 128GB MicroSD card preloaded with the antMan software. $150 is the cost of the device itself, but the software is unfortunately an added cost... more or that below.

Ansle's control software is called antMan. antMan is a browser-based solution (with an accompanying API) that allows you as the user to control the underlying hypervisor. You can configure your networks and virtual machines—known as "antlets" in the Antsle world—from the antMan dashboard. The antMan user interface is relatively straight forward and well laid-out. After the first 5-10 minutes, I had no problems finding my way around to do what I needed to do. 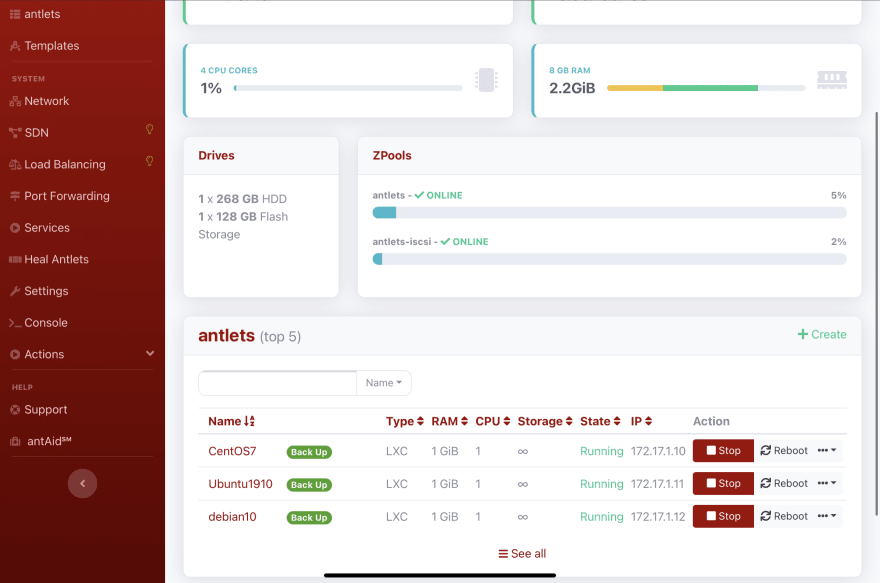 Currently, there are five different pricing models for antMan, summarized below in my own cheeky manner. Feel free to review Antsle's pricing page for all the details.

The operating system behind the curtain

antMan itself runs on top of Antsle's edgeLinux operation system. edgeLinux is essentially a customized version of CentOS 7 that comes packed with all of the usual open source hypervisor technologies that you'd expect to run LXC containers and KVM virtual machines. Docker also comes pre-installed, although no effort is made to expose Docker's functionality in the antMan user interface.

antHill is Antsle's cloud-based management portal. Antsle will tell your that it is used to ease the initial setup and management of your Antsle unit(s). But if you read between the lines a little bit... antHill seems to the mechanism Antsle uses to manage your antMan license.

Honestly, there isn't much to say about antHill beyond that. I used it once to activate my license and haven't used it since. Although I will note that it was a rather annoying to have to reconfigure my home network to allow my Antsle to talk to antHill long enough to activate my license.

So is it any good?

Good question. For now, my answer is "kinda/sorta... but not really".

If you glance at Antsle's advertising, you might expect that you'll be purchasing a fully featured private cloud-in-a-box. I know when I first read about Antsle, I was envisioning a simple platform capable of creating S3-compatible object storage, a ready-to-go container/Kubernetes platform, an easy method to spin up common open source databases (MySQL, PostgreSQL, etc.), and perhaps even a functions-as-a-sevice mechanism similar to AWS Lambda or GCP Functions.

What you get is small, compact Type 1 hypervisor with a web management portal. Based on my (admittedly limited) personal experience, the hardware itself seems solid, but not something that you couldn't purchase elsewhere from another source. And the software certainly leaves a lot to be desired. Unfortunately for Antlse, the main functionality that antMan provides can already be achieved for free from other hypervisors such as ESXi, Xen, etc.

Honestly... I think there is a place in the market for Anstle’s products, but I’m struggling to clearly articulate where that place is. Solo, startup, and freelance developers looking for a public cloud replacement will likely be frustrated by antMan's limited feature set. Home lab users are likely to be better served using something like Proxmox. And business users likely have the budget to simply use a public cloud provider.

Perhaps the biggest downside, at least for me, is that their most attractive device for people looking to build a home lab—the Antsle Nano—does not come bundled with their Home Lab license and instead requires subscription-based license. The discounted launch pricing on the antMan license is appreciated, but just knowing that I’ll have to pay another $348 in a year to keep my device functional is frustrating.

I do think there is potential for Antsle to improve. If Antsle was able to replicate more of the public cloud services in antMan, I think it could be a very compelling product overall, even with the subscription-based licensing. But as of right now, I find it hard to recommend. That said, if you are just looking for a small, quiet, easy-to-setup device to run some virtual machines... look no further. Antsle's products will do just that.

What do you think? Is Antsle worth it? Or would you stick with your public cloud account? Perhaps you are using another solution at home that I should look at? Let me know!

p.s. Given my current antMan license is valid for another 10 months, let me know if you’d like more in-depth walkthrough.

Bryan Woolsey
I do client/server automation stuff. Also FPGA stuff. Also eat burritos.
GitLab will be deleting dormant projects
#news #discuss #gitlab #cloud
You will not do it later (most likely) - I'm a procrastinator, I know
#programming #discuss #watercooler #productivity
What is your favourite Code editor
#programming #beginners #productivity #discuss

Once suspended, ragnarkon will not be able to comment or publish posts until their suspension is removed.

Once unsuspended, ragnarkon will be able to comment and publish posts again.

Once unpublished, all posts by ragnarkon will become hidden and only accessible to themselves.

If ragnarkon is not suspended, they can still re-publish their posts from their dashboard.

Once unpublished, this post will become invisible to the public and only accessible to Bryan Woolsey.

Thanks for keeping DEV Community safe. Here is what you can do to flag ragnarkon:

Unflagging ragnarkon will restore default visibility to their posts.