Most languages have a built-in method which serves the purpose of trying to sort a bunch of data. The common tendency amongst most developers, especially those who are just beginning their journey, might be to choose this path and avoid writing their own implementation. But, this can end up having unforeseen repercussions in terms of performance. Therefore, it is better to go with a sorting technique that is best suited for your current requirement.

The first 3 sorting algorithms that I cover in this article, have an average time complexity of O(n²). These are ones which are fairly popular, and are much more intuitive in their approach to sort data.

The other 2 have an average time complexity of O(n*log n), and can be bit tricky to comprehend if you have no prior knowledge of recursion. So, I would suggest that you go through this article to understand how recursion works.

In the following sections, I shall give you a brief explanation as to how that particular algorithm goes about sorting data. Then, I give you some pseudocode in case you wish to go ahead and try to implement that algorithm on your own. Finally, I provide a gist for my implementation of the algorithm. I would suggest that you understand the pseudocode before diving into the gist, as that will help you grasp the use case for each algorithm better.

Let’s get started with Bubble Sort, shall we. The space complexity for the algorithm is O(1) and the average time complexity is O(n²).The pseudocode is as follows: 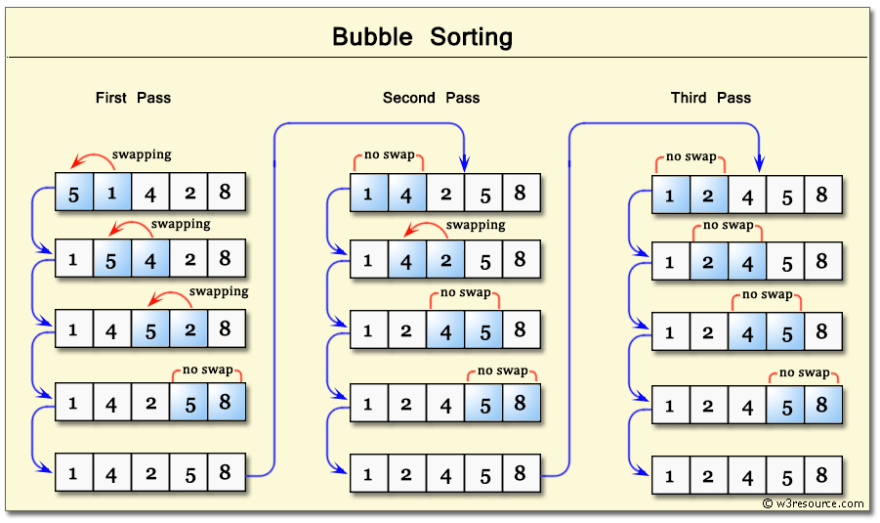 The code for the implementation in JS is as follows:

Note that the second implementation is slightly optimized to handle an array that is almost sorted.

The next sorting algorithm which has a time complexity of O(n²) is Insertion Sort, it also has a space complexity of O(1). This is most useful when there is a scenario wherein you are receiving a series of numbers in real time, and need them in a sorted array.

The main concept to understand when using this technique is that, there is a portion of the array that is always sorted and a section that remains unsorted. 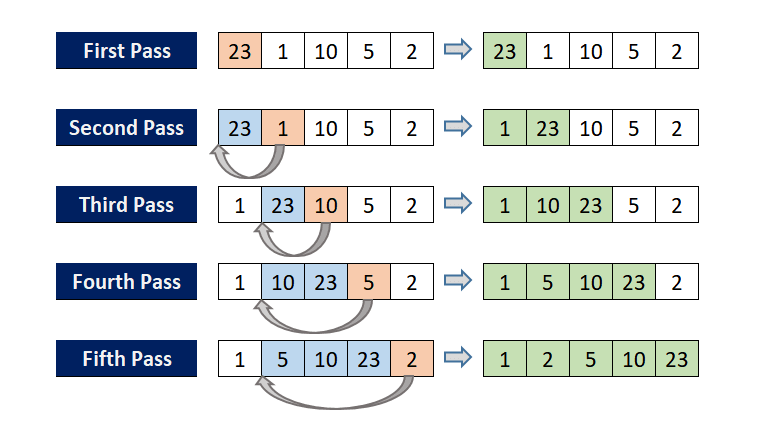 The code for the same is as shown below.

Selection Sort is the last sorting algorithm to have a time complexity of O(n²), included in this article. The space complexity is the same as the previous two techniques i.e, O(1). The pseudocode for this algorithm is as follows.

This is usually not that useful in most situations, but still helps a beginner grasp the concepts of implementing an algorithm to solve a problem. 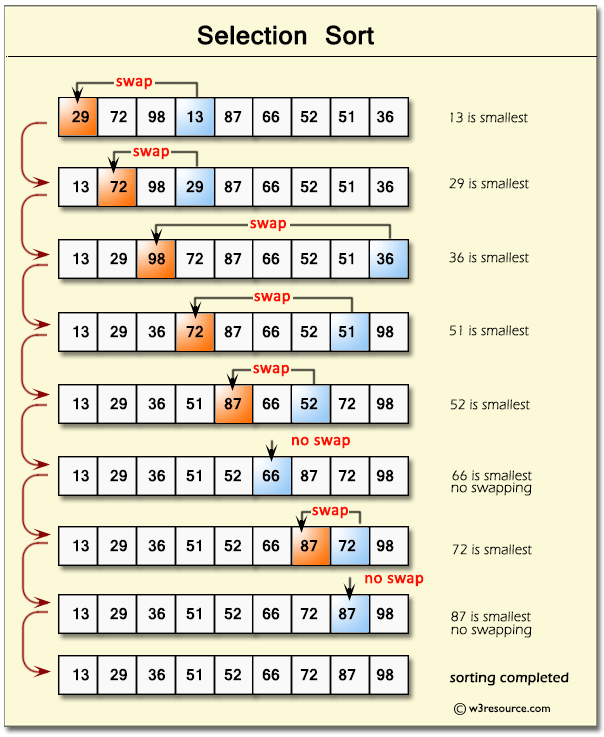 My implementation is as follows. Note that the sorted array is built up from the 0th index.

You may have noticed that it is quite difficult to get a performant sorting algorithm using these techniques. Hence, in order to have an algorithm that is better than O(n²) in terms of time complexity, we have to use recursion.

The next 2 techniques can seem less intuitive at first go. So do read the pseudocode before you jump to the code, in order to make sense of the procedure followed!

Both of them have an average time complexity of O(n * log n). Their space complexities varies depending on the technique.

Let’s take a look at how merge sort is able to use recursion to implement an algorithm with a better time complexity.

The main concept here is that an array with size 0 or 1 is inherently sorted. This means that if we are able to split our array into smaller subarrays of size 0 or 1, and merge them correctly, we have sorted our array!

So there are two things that we need to do before we can implement merge sort. We need to find a way to divide an array into halves continuously, until we end up with arrays of size 0 or 1. Then, we merge them in a way that results in a larger (but still sorted) array.

The pseudocode to continuously divide an array, and end up with a bunch of arrays of size 0 or 1, is as follows.

Now, let’s tackle the issue of merging two arrays (of size≤1) such that we end up with a sorted array.

See the image below to see how this technique needs to work. 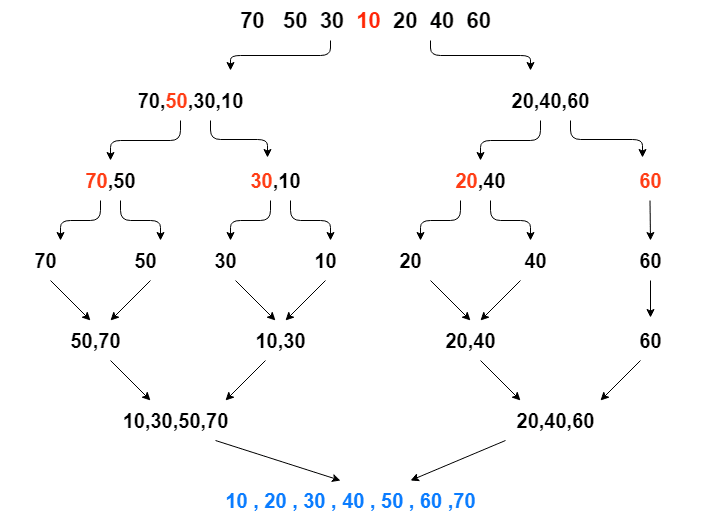 The code for the merge sort algorithm is as follows. Note the use of helper function to implement the merging of 2 subarrays, and it is pretty evident that the space complexity for this algorithm is O(n).

Lastly, let us see how quick sort justifies its name and goes about sorting an array.

The only 2 tasks we need to do in order to implement quick sort’s algorithm is to correctly identify the index for the pivot and place the pivot element at that index. Initially, we assume the pivot to any element in the array, in this example I shall consider the 0th element to be the initial pivot.

The pseudocode to correctly return the index for the pivot element is as follows. Note that this is also called the partition function.

Once you have a helper function to do the above task, we need to recursively place all the pivot elements in their correct positions. The pseudocode to so that is as follows.

The video shows a visualization of quick sort algorithm. The pivot elements are colored yellow.


The code for implementing quick sort in JavaScript is as follows. Note that the space complexity is O(log n).

Now that you know how to implement these 5 sorting algorithms, the next step is to understand which technique works best for the situation you find yourself in. To see some regular use cases, you can checkout this article.