I stumbled upon a research paper that used both surveys and log analysis to understand developer behavior at Google.

This is intended to be a collaborative post, meaning it's an open invitation to connect and discuss.

Because I believe the results of the research point to an interesting way for you to:

What was interesting to me was the results from the logs (although the surveys helped to provide valuable qualitative coloring).

The internal tool that they used was a "code search" tool. Most devs use their IDE, Github, or grep when doing code search. So the concept of searching for code isn't new or breaking ground.

However, the use-cases and frequency of code search made me realize that a purpose-built tool would enable new kinds of behavior for developers outside of Google.

I recognize that Google would build their own code search because of their "Big Code." And for those working on small code bases, the use cases and capabilities don't apply.

However, I don't think having as much internal code as Google is the threshold for achieving "Big Code" and the associated problems.

Not to belabor it since it's not the purpose of this post, but the top three reasons more and more developers should learn how Google devs leverage code search are because more developers will have environments that are similar:

What were developers at Google trying to do?

But that's the point: if Google is using a special tool with their own course on how to do so, perhaps this is helpful for developers not at Google.

Here are the major categories of what they are trying to do: 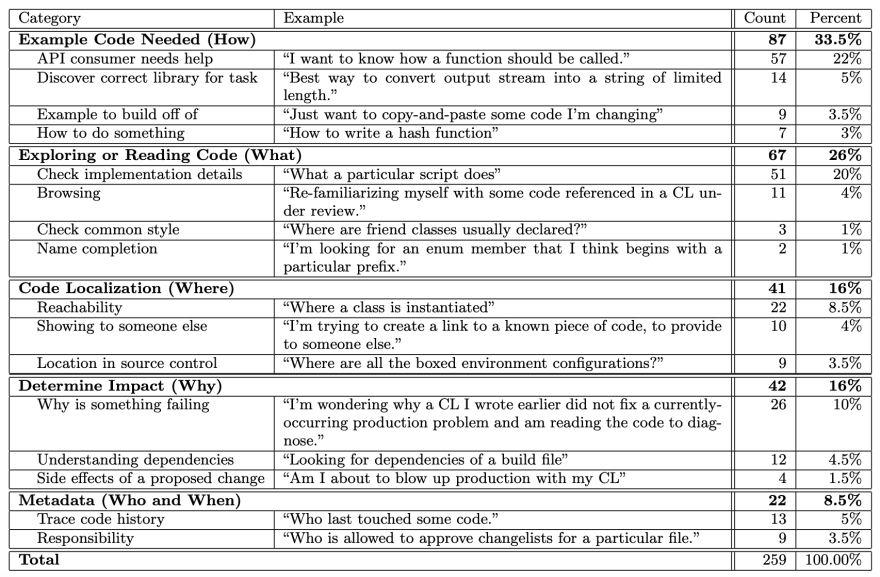 What helps you the most?

The research was helpful at a high-level.

But what is the problem to solve and outcome that you would be most interested in help in?

What saves you the most time and broadens your opportunities?

I am honing in on:

Are there other things that would be helpful?

What do you think of this concept?

Once suspended, realquadrant will not be able to comment or publish posts until their suspension is removed.

Once unsuspended, realquadrant will be able to comment and publish posts again.

Once unpublished, all posts by realquadrant will become hidden and only accessible to themselves.

If realquadrant is not suspended, they can still re-publish their posts from their dashboard.

Once unpublished, this post will become invisible to the public and only accessible to timfong888.

Thanks for keeping DEV Community 👩‍💻👨‍💻 safe. Here is what you can do to flag realquadrant:

Unflagging realquadrant will restore default visibility to their posts.