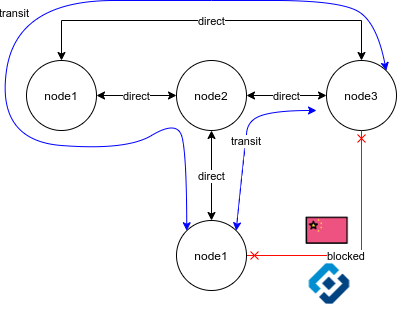 Automatic, secure, distributed, with transitive connections (that is, forwarding messages when there is no direct access between subscribers), without a single point of failure, peer-to-peer, time-tested, low resource consumption, and a full-mesh VPN network with the ability to "punch" NAT - is it possible?

Unfortunately, Tinc VPN has no such big community like Open VPN or similar solutions, however, there are some good tutorials:

The Tinc man is always a good source of truth.

Tinc VPN (from the official site) is a service (the tincd daemon) that makes a private network by tunneling and encrypting traffic between nodes. Source code is open and available under the GPL2 license. Like a classic (OpenVPN) solutions, the virtual network created will be available at the IP level (OSI 3) which generally means that making changes to the applications is not required.

There are two branches of tinc development: 1.0.x (in almost all repositories) and 1.1 (eternal beta). In this article, only version 1.0.x was used.

From my point of view, some of the strongest features of Tinc is ability to forward messages over peers when direct connection is not possible. Routing tables are built automatically. Even nodes without a public address can become a relay server. 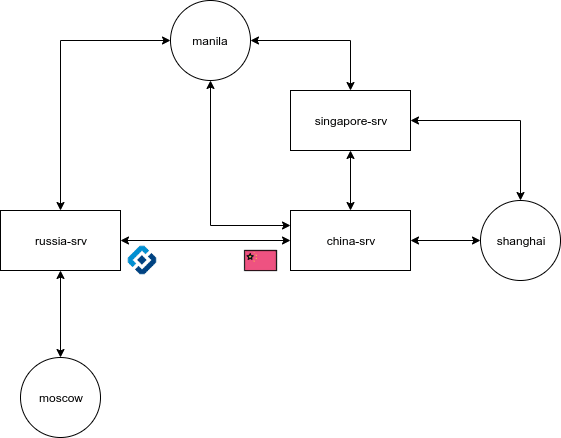 Using the traffic exchange between Shanghai and Moscow as an example, consider the following Tinc scenarios (approximately):

Whenever possible, Tinc attempts to establish a direct connection between the two nodes behind NAT by punching.

Tinc is positioned as an easy-to-configure service, however, something went wrong - to create a new node, minimal requirements are:

In addition to described above, when connecting to an existing network, you must obtain the existing host keys and provide your own.

Ie: for the second node

For the third node 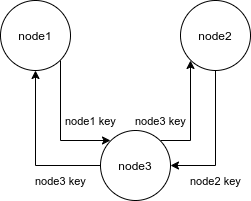 By using two-way synchronization (for example, unison), the number of additional operations increases to N, where N is the number of public nodes.

With respect to the developers of Tinc - to join to the existing network, you just need to exchange keys with only one of the nodes (bootnode).
After starting the service and connecting to the participant, tinc will
get the network topology and will be able to work with all members.

However, in case of the boot host has become unavailable and then tinc was
restarted, then there is no way to connect to the virtual network.

Moreover, the enormous possibilities of tinc, together with the academic documentation of the project (well described, but few examples), provide an extensive field for making mistakes.

Generalizing the problems described above and then formulating them as tasks, we got the following as necessities:

bootnode - node with a public address;

Due to task 2 above, we can guarantee that after the key exchange between the bootnode and the new node and after establishing a connection to the network, the new key will be distributed automatically.

A tinc-boot was made to solve said tasks.

tinc-boot is a self-contained (except tinc) open source application that provides: 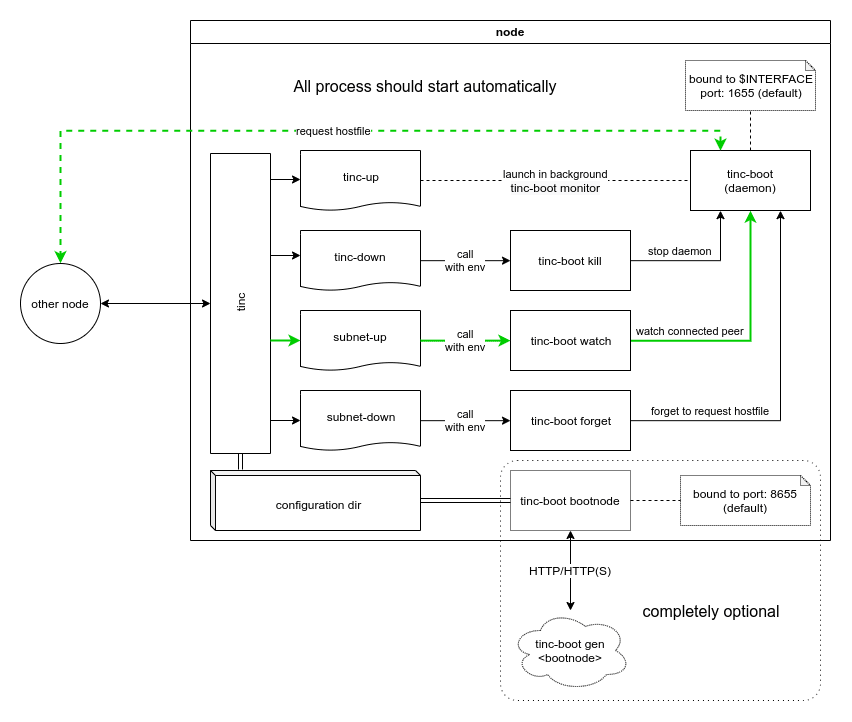 The tinc-boot executable file contains four components: a bootnode server, a key distribution management server and RPC management commands for it, as well as a node generation module.

The node generation module (tinc-boot gen) creates all the necessary files for tinc to run successfully.

Simplified, its algorithm can be described as follows:

For the very first node (that is, when there is nothing to specify as the boot address), step 9 is skipped. The --standalone flag.

Example 2 - adding a non-public node to the network

The boot node will be taken from the example above. The host must have tinc-boot bootnode running (to be described later).

The boot module (tinc-boot bootnode) runs an HTTP server and serves as API for the key exchange with new clients.

Simplified, the algorithm can be described as follows:

Together, the primary key exchange process is as follows:

It is assumed that the first initialization of the node already was done (tinc-boot gen).

The key distribution module (tinc-boot monitor) raises an HTTP server with an API for exchanging keys with other nodes inside the VPN. It binds to the address issued by the network (the default port is 1655, so there will be no conflict with several instances since each network has (or must have) its own address)

There is no need to manually work on the module since it starts and works automatically.

The module starts automatically when the network is up (in the tinc-up script) and automatically stops when it's down (in thetinc-down script).

In addition, every minute (by default) and when a new configuration file is received, indexing of the saved nodes is made for new public (with public IP) nodes. When nodes with the Address flag are detected, an entry is added to the tinc.conf configuration file to recommend connection during restart.

Commands for requesting (tinc-boot watch) and canceling the request (tinc-boot forget) of the configuration file from other nodes are executed automatically upon detection of a new node (subnet-up script) and stop (subnet-down script) respectively.

In the process of stopping the service, the tinc-down script is executed in which the tinc-boot kill command stops the key distribution module.

This utility was created under the influence of cognitive dissonance between the genius of Tinc developers and the linearly growing complexity of setting up new nodes.

The main ideas in the development process were:

During development, I actively tested on real servers and clients (the picture from the description of tinc above is taken from real life). Now the system works flawlessly.

The application code is written in GO and open under the MPL 2.0 license. The license (free translation) allows commercial (if suddenly someone needs) use without opening the source product. The only requirement is that the changes must be transferred to the project.

How to Build API with Go and QuestDB

Once suspended, reddec will not be able to comment or publish posts until their suspension is removed.

Once unsuspended, reddec will be able to comment and publish posts again.

Once unpublished, all posts by reddec will become hidden and only accessible to themselves.

If reddec is not suspended, they can still re-publish their posts from their dashboard.

Once unpublished, this post will become invisible to the public and only accessible to reddec.

Thanks for keeping DEV Community 👩‍💻👨‍💻 safe. Here is what you can do to flag reddec:

Unflagging reddec will restore default visibility to their posts.