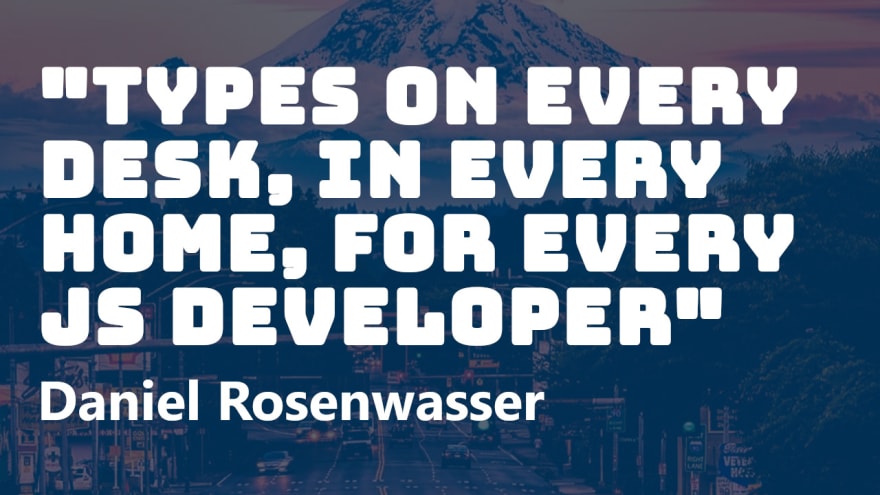 There were no big announcements or surprises in TSConf 2019, but I was not disappointed. When I decided to join TSConf 2019, I was not expecting big surprises. TypeScript is an open-source project, which means that there are not many secrets about it. If you want to know what are the most recent additions to the language, all you need to do is to visit the GitHub repo.

Also, I'm very enthusiastic about TypeScript, and I try to stay up to day regularly, so I was also not expecting to learn a lot of new things. My main reason for attending the conference was to meet the TypeScript team and other members of the community once more.

I was not disappointed. I enjoyed the talks, learned about some cool new projects, and met other members of the TS community.

The day started with a keynote by Anders Hejlsberg about the evolution of the TS community and all the new features since TSConf 2018.

A few months ago, Daniel Rosenwasser wrote that he would like to see "Types on every desk, in every home, for every JS developer". Well, it looks like it is happening! 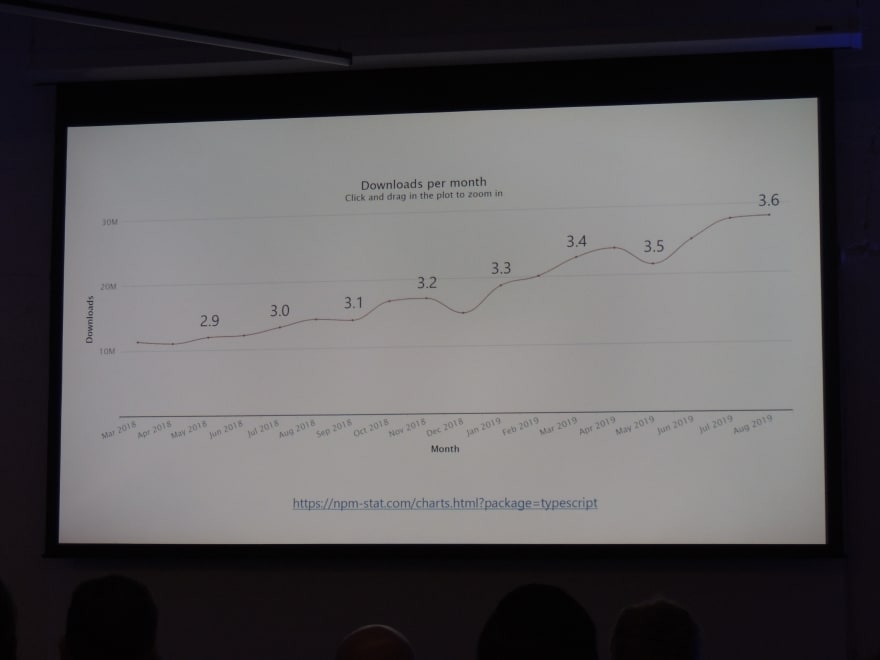 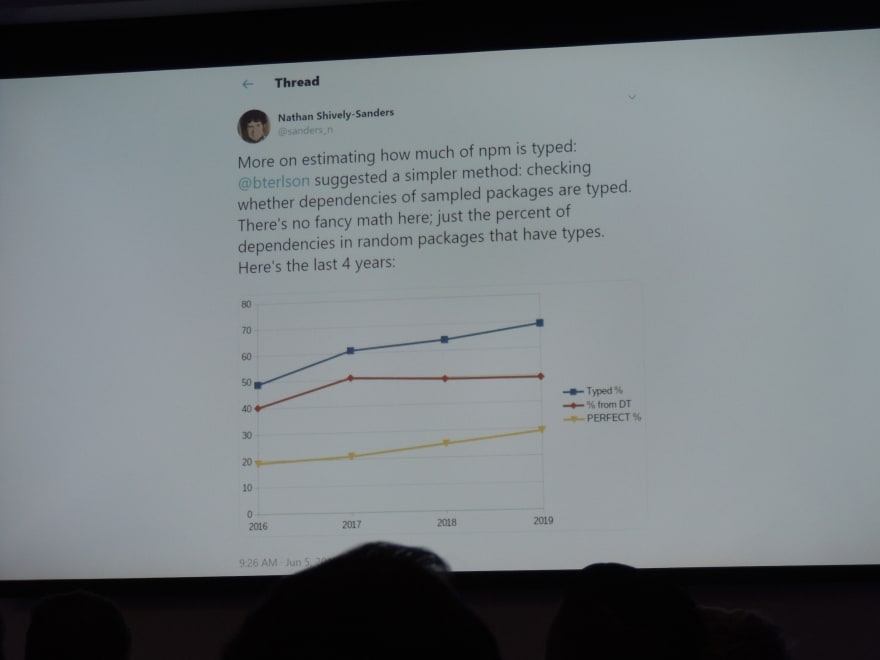 It was nice to see how much the language has improved in a bit over a year. We get a new release every couple of months, and it is easy to forget how much the TS can evolve in just one year. The main improvements have been: 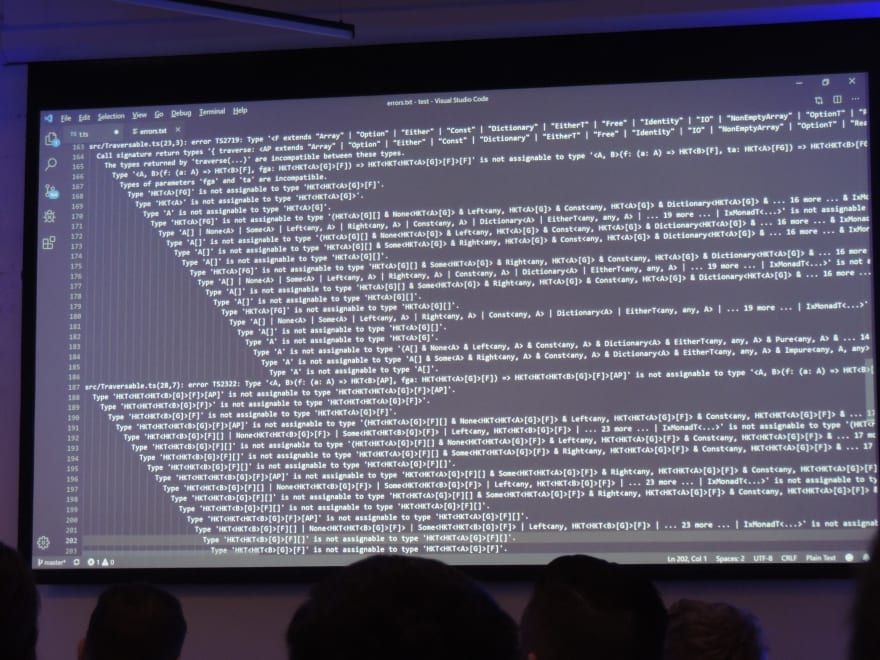 Pushing the type system to the limit

You may have heard that the TypeScripts type system is Turing complete. Being Turing complete means that it is possible to implement any computable problem using only the type system. The name is a reference to the Turing machine. I do understand the implications of this. However, I have never been able to imagine how one could do such a thing. Josh Goldberg showed us how to implement basic operations such as addition with binary numbers (Binary Arithmetic) using the TypeScript type system. The talk was entertaining, and it helps to realize how powerful the TypeScript type system can be when it is pushed to the extream. 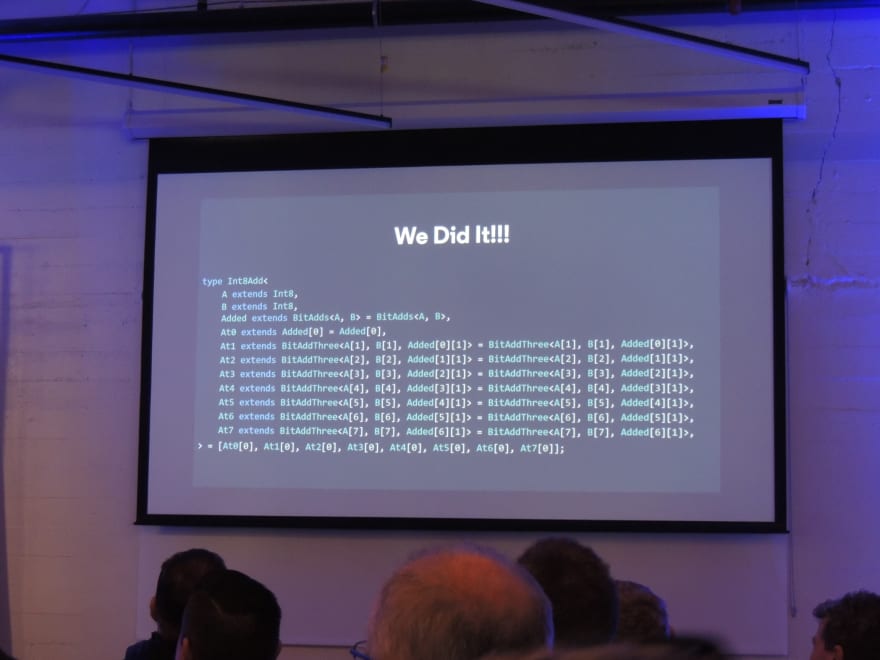 Josh's talk was my favorite talk of the day, and I encourage you not to miss it once it is available online.

An exciting alternative to Node.js

Deno is an alternative to Node.js from Ryan Dahl (the original creator of Node.js). It tries to reduce the complexity of the tooling around Node.js by simplifying its module system. Deno also supports .ts files and includes some built-in tools such as a bundler and a code beautifier. I was interested in Deno before, but I didn't know that version 1.0 is expected to be out before the end of this year.

Dan Vanderkam introduced us to dtslint, a utility that allows us to test type definitions. This project is only useful for people that are interested in contributing to the TypeScript type definition files of JavaScript libraries that can be found at the DefinitelyTyped. I was not aware of this project. I guess that this is the case for many of us because this project has a small number of stars on GitHub.

The Static TypeScript project is a compiler that allows us to compile a subset of TypeScript into machine code that can be executed in microcontrollers. This project is very interesting because it enables web developers to experiment with embedded applications without having to learn a completely different toolchain. The project is used by MakeCode. A tool that allows kids to learn to code.

Making a case for types at Netflix

Lauren Tan explained to us how difficult it was to make a case for types in JavaScript at Netflix. In the end, the main problem turned out to be a communication problem. Lauren managed to make a case for types by demonstrating that the more concrete a type definition is, the less likely we are to encounter a problem. This story has a happy ending, Netflix is now using TypeScript at scale without regrets and Lauren has been promoted to Engineering Manager 🎉

TalkScript with the TypeScript team

The day ended with a Q&A panel with some of the members of the TS team. Including Anders Hejlsberg (Technical Fellow), Daniel Rosenwasser (TypeScript Program Manager) & Ryan Cavanaugh (TypeScript Software Engineering Manager).

There were no surprises here, but there was a nice feeling of confidence and security. I think we can all trust that TypeScript is in good hands, and it is a technology that is going to continue to evolve in the right direction. The entire team wants to focus on:

I think no one in the community disagrees with these goals. 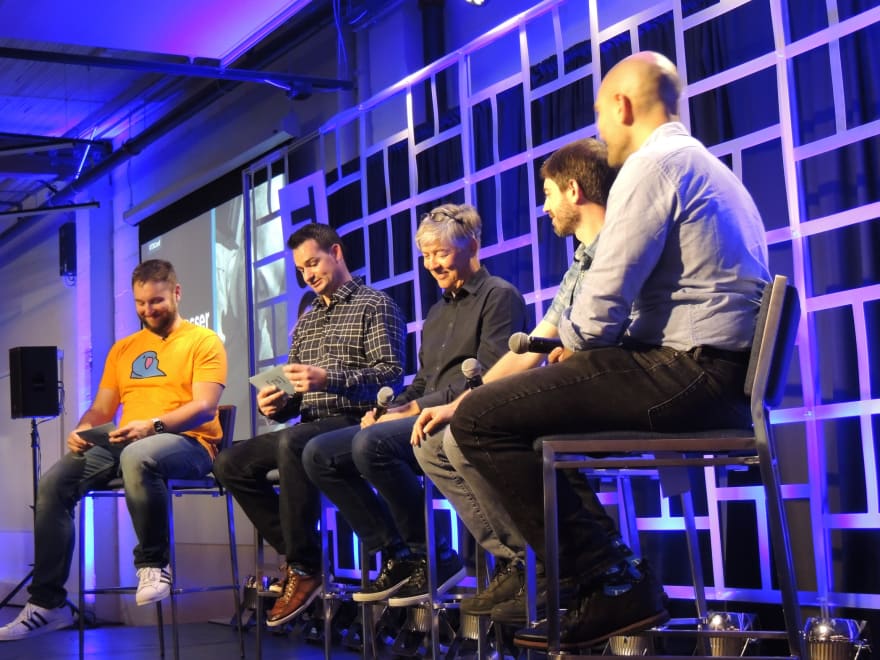 During the conference, there were a few projects that I found very interesting and that I plan to explore at home when I have some free time.

TSConf 2018 was a significant milestone. The language had matured, and its community was large enough to sell out the first conference dedicated exclusively to TypeScript. TSConf 2019, solidifies in this foundation with an even larger crowd and an ever-growing list of exciting projects. Please visit tsconf.io to learn more about future editions.

I'm writing this blog post while I wear my new TypeScript socks (thank you, TSConf! 😍) at the Seattle airport, and I cannot wait to see what TSConf 2020 will bring to the table! 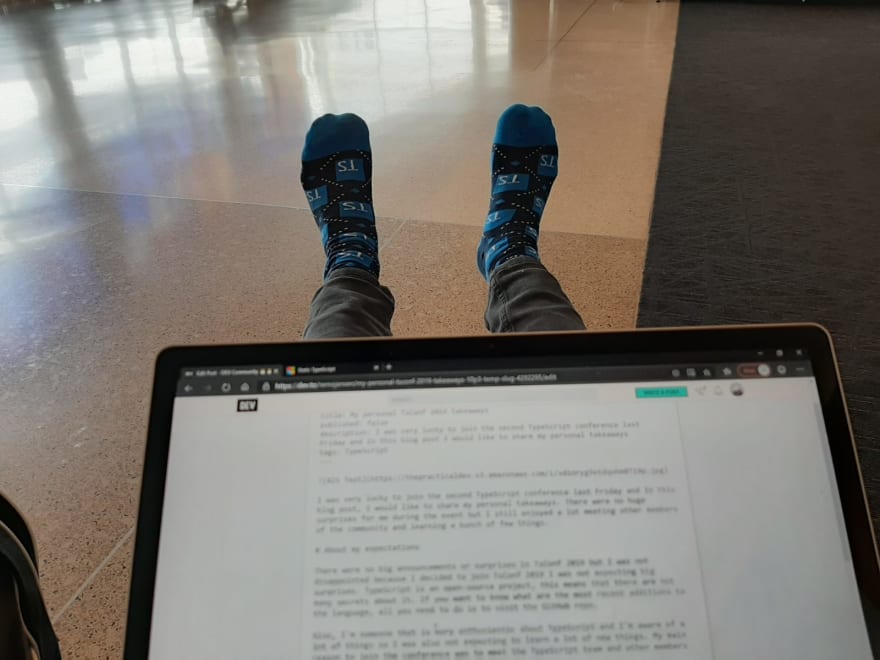 Once suspended, remojansen will not be able to comment or publish posts until their suspension is removed.

Once unsuspended, remojansen will be able to comment and publish posts again.

Once unpublished, all posts by remojansen will become hidden and only accessible to themselves.

If remojansen is not suspended, they can still re-publish their posts from their dashboard.

Once unpublished, this post will become invisible to the public and only accessible to Remo H. Jansen.

Thanks for keeping DEV Community 👩‍💻👨‍💻 safe. Here is what you can do to flag remojansen:

Unflagging remojansen will restore default visibility to their posts.