You can find all source code for this post in a starter template here.

Feel free to reach out on Twitter any time with questions as well.

You've probably heard of Tailwind by now, but if you haven't, it is essentially a utility-first CSS framework and is much less opinionated compared to other CSS frameworks like Bootstrap and Foundation. According to tailwindcss.com, it is described as:

A highly customizable, low-level CSS framework that gives you all of the building blocks you need to build bespoke designs without any annoying opinionated styles you have to fight to override.

In my opinion, this makes Tailwind a great option to use for your projects. You get the benefits of rapid development, without the opinionated styles that you ultimately override anyway.

So what if we want to use Tailwind with React, is it as simple as just including a style sheet? Not exactly. Because of how Tailwind is built and some of the optimizations they have in place (i.e. purging unused CSS), there are a couple extra steps to properly set it up in a React project.

Getting the Project Setup

To get started, either jump into your own React project or start up a new one with npx create-react-app tailwind-react-app.

Next, let's install a couple of dependencies via npm i @fullhuman/postcss-purgecss postcss-cli tailwindcss --save-dev.

A brief explanation of each dependency:

Now that we have our dependencies installed, we need to create a couple config files.

Next, create your PostCSS config by creating a postcss.config.js file in the project root and adding the following content:

In the first portion, we require and setup purgecss. This requires two pieces. The first is the list of purgeable files which are js, jsx, and html (you can also add .ts and .tsx). The HTML is required so the base styles (e.g. body, html, etc) don't get purged.

The second portion is used to define the extractor function (i.e. rules for which content to keep). PurgeCSS is naive by nature, meaning it will look for content that matches that Regex in the file types listed above. This is important to know and will be revisited when we discuss patterns below.

Now that we have our dependencies installed and our config files setup, we can actually add the Tailwind CSS file to our app. To begin, create a tailwind.css file in the src/ folder with the following Tailwind directives:

This will pull in and compile the styles for us automatically when we build our Tailwind output. It's also useful to note that this file is where we could add our own Tailwind custom utilities if we wanted. For more information on adding new utilities, click here.

Finally, let's import the output file (which we will create via the build scripts in the next section) to our app.js so it is available globally throughout our app.

You may need to change the path if your app.js isn't directly in the root of the /src folder, as that is where this will output by default.

The last step to get Tailwind working is to create a couple quick build scripts to ensure that the output file gets built. Let's add the following to our scripts section in package.json:

There are two separate Tailwind scripts we created. The first :build one is for production builds (i.e. run the PurgeCSS we defined above), whereas the second one is a dev build which keeps the full Tailwind CSS since we want to access all the styles as we're developing.

The next part is the prestart where we run the dev build prior to staring up the React development server. You could take it a step further and add a watch script that checks for changes to tailwind.css, but I've found that additions / changes to this file are pretty rare, so I simply restart the dev server if this comes up.

Finally, the last part is the prebuild script which runs the production (purged) Tailwind build which will result in a CSS file that only contains styles we've actually used in our app.

Now that we have Tailwind running within our app, when we can discuss some design patterns that make it easy to work with in React components.

What Not To Do

Before jumping into some patterns, I think it's worth mentioning what not to do. How you decide to use Tailwind in your app is ultimately up to your preference, but there is one common mistake that can quickly get you into some trouble and it relates to the purging of the unused CSS as I mentioned above.

Let's look at an example to illustrate the issue. Assume we have a basic input component as follows:

Now, let's say we want to conditionally change the border to red if there is an error somewhere. If we have an error state / prop variable, we may be tempted to do something like:

At first glance, this looks correct. In fact, it would render the correct classes and work just fine in development. However, once you build the production version of your app, you would notice these styles are missing, but why is that? As mentioned earlier, PurgeCSS runs against our production build to create the smallest Tailwind CSS file possible. It simply looks at the file types you provided and tries to find content matching the Regex. In this case, when it checks this component file, it won't match on border-red-500 or border-gray-300 because they are built dynamically. Instead, it will come across red-500 and gray-300 and not work as intended.

So how do we avoid this? The easiest way is to always ensure when writing Tailwind classes in your code, the full class name is there and isn't built dynamically. Therefore, using the above example, we get:

Now when PurgeCSS runs against this file, it will keep border-red-500 and border-gray-300, as it should.

Let's take a look at some basic Tailwind patterns we can use in our app now that we know what not to do.

A pattern I've been using for a little while now is one that involves defining all of your classes above the component in an object with strings for each element.

For example, here is a basic component:

Using the above pattern, the component code would look like:

This basic pattern has a couple nice benefits:

With that said, what do we do when we get more advanced components that need to change as state or props change in our app? Let's take a look at a more advanced pattern that expands on this.

Now that we have a basic pattern involving the definition of all our classes above our component, we can take it a step further when we start to have more dynamic components.

For example, here is a more dynamic component: 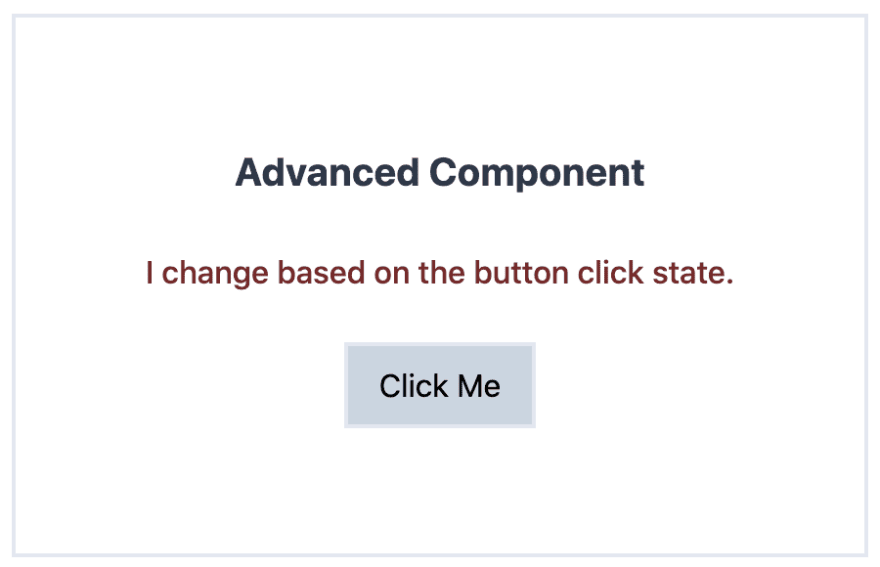 In the above screenshot, both the button and the subtitle text change when the button is clicked on. Let's look at the code for this component:

The first thing to notice is the description class. Unlike the others, this one is a function that takes in a parameter (or multiple) and outputs a slightly different class (text color and font weight in this case) string as a result. This allows you to maintain the benefits of the basic design pattern, but also add in a conditional aspect as well. It's also import to note, the classes are still fully defined as well so PurgeCSS will still have no issues.

Another method of creating dynamic classes while maintaining the basic pattern is what was done with the button and buttonActive classes. In this case, the clsx module was used to dynamically add classes based on conditions. The classes.button class was added without conditions (the base styles), however classes.buttonActive is only added if active is true. This method also works well when you have a number of conditionally added classes to an element or if your classes are just getting a little out-of-hand and you want to break them down a bit. Once again, PurgeCSS will work fine with this method as the underlying classes are fully defined.

I hope this helped get you up and running with Tailwind on your React app and gives you some inspiration on how you can use it within your components in a way that makes it easier to work with.

If you have any questions, suggestions, or run into any issues, feel free to reach out on Twitter.

Productivity Benefits of Integrating ChatGPT into the Front-End Development Process

Once suspended, rfitz will not be able to comment or publish posts until their suspension is removed.

Once unsuspended, rfitz will be able to comment and publish posts again.

Once unpublished, all posts by rfitz will become hidden and only accessible to themselves.

If rfitz is not suspended, they can still re-publish their posts from their dashboard.

Once unpublished, this post will become invisible to the public and only accessible to Ryan Fitzgerald.

Thanks for keeping DEV Community 👩‍💻👨‍💻 safe. Here is what you can do to flag rfitz:

Unflagging rfitz will restore default visibility to their posts.