The following is a brain dump of everything I've learned so far using Go, writing the mvp of an app, in 7 days.

My only previous experience with Go was "copying and pasting" with what become part of this article last year.

I've been asked by a client to write an API server. The deadline for the MVP was "yesterday" so I decided, instead of comfortably using Python (and quite frankly taking a little bit less of time) to write it in Go in 7 days.

I know, it sounds ridiculous, but I had (vague) requirements like:

The second thought was: breathe.

Disclaimer: I'm in R&D so not everything I write becomes a production application.

Also, do not try this at home :P

The first thing I had to figure out was how. So I've read a bunch of tutorials and guides and then started from the simplest of web apps:

This is all standard library and it's production ready.

I listed all I needed and sketched with the input of the company's PM the data entities and the endpoints, the data flow and so on.

I knew I could safely model everything with a "classic" relational database and so I did. The README on Github lists the following two requirements for now:

though I'm sure it can work with PostgreSQL 9.6 and since I know little about Go, probably with earlier versions of that too.

I also wanted to keep dependencies at a minimum (more on this later).

I actually wrote the SQL for the entities by hand. It took me a couple of tries because I always, always, forget something in the CREATE TABLE statements (remember kids to put NOT NULL in your foreign keys or else die a slow death). I also spent 10 minutes googling for the best SQL extension for Visual Studio Code, which I didn't find. They all suck.

The data model is pretty simple though. Three entities: A, B and C. C belongs to B and A. B belongs to A. A is the know it all.

Anyway I have been too spoiled by data mappers like SQLAlchemy or ORMs like ActiveRecord to generate the initial schema. Man, typing SQL without code completion is retro.

I actually tried to use gorm which, as the name says, it's a Go ORM, in the beginning but I abandoned on day 2. I didn't feel confident with it, the auto migrate functionality scared me (auto migrations during the start of the app!?!?!) and I had some issues (later on I also found out it has performance problems but I didn't know yet).

This is the actual commit message from git log:

I ended up using go-pg which is an ORM (ahem) but also a PostgreSQL client.

What follows is a glimpse in the journey I had these seven days and the partial insanity of my decision (I won't quote Robert Frost's The Road Not Taken, I promise) and of some aspects of Go I liked or liked less.

The thing is that numerous methods return a value and a an error so you end up having to handle errors every other line. I do have methods like:

It can really become weird at some point.

This means: ID is an integer, with a non null column in the database which should be ignored by the JSON serialiser (because we never return DB numeric primary keys to an API client, right?). It also says that CreatedAt and UpdatedAt and timestamps with their own serialisation name.

The reason why they are capitalized is that in Go names starting with a capital letter are public, names with a lowercase letter are private. Simple as that.

So what do I do with this "base" Model struct? I embed it in the actual model struct:

There's a lot to unpack here: I'm not sure how but magically you will find ID, CreatedAt and UpdatedAt in your model struct plus the rest of the fields specific to that model/table, in this case Name. 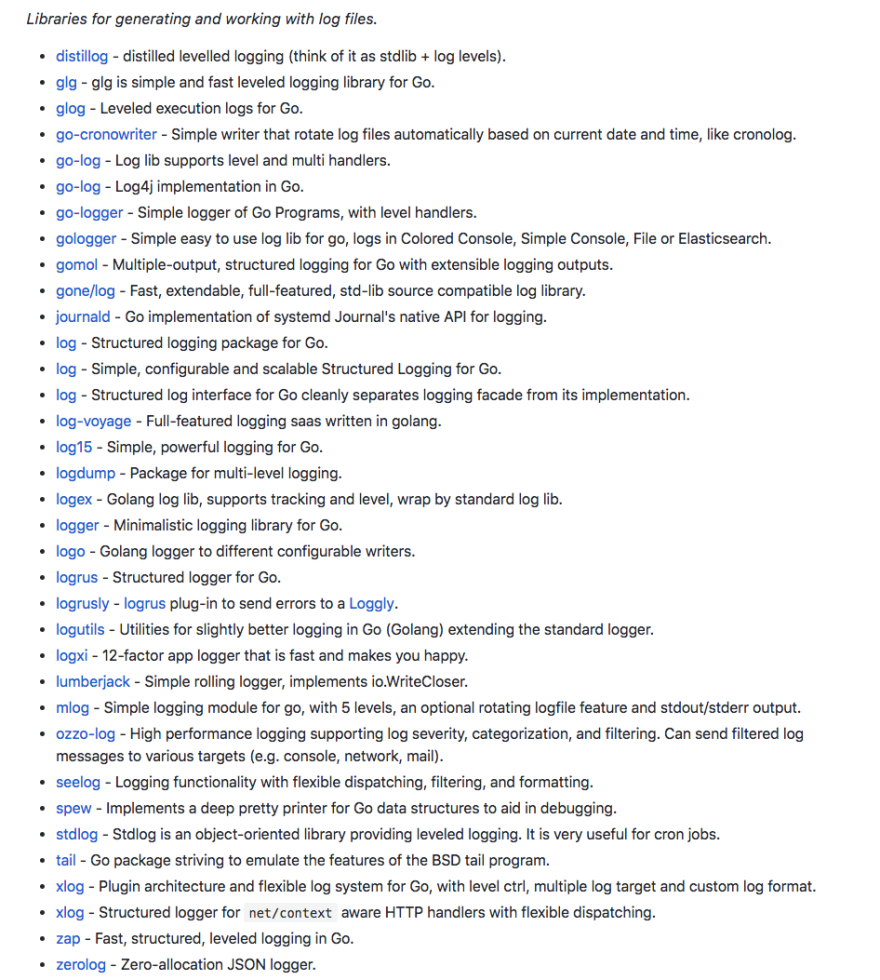 See? Are you kidding me? I also ended up with none of them. I'm using go-kit's log, only the log module which, because Go is awesome and weird, you can just import without importing the rest of the package. Magic.

Here we tell the DB that the model is our A struct up there, that we want all the columns, which criteria to use in filtering and to issue the SELECT.
The weird signature func (s *AService) LoadA(name string) (*A, error) means "this is a method of AService called LoadA which takes a string and returns a pointer to A and and error. Yes, it's a mouthful, but you get used to it quickly.

If you love PostgreSQL like I do you'll love go-pg but please, start from the wiki, save yourself some time :D

The colours are set by go-kit/log colouring module by level.

This is a response time for a SQL Select (with pre warmed cache), plus JSON serialization on localhost:

This is the same server replying with 401 Unauthorized if I use the wrong api key:

This is what you write in the Heroku's Procfile:

That's really it. It has an impact on your development feedback cycle. "It's compiling" is not an excuse with Go :-D

My current experience in Go is "copying and pasting" and "stackoverflow programming" and "WTF" and "wow" and "OMG this thing is amazing" and "I can't believe the packaging system sucks" so I'm sure I'm going to change opinion about a lot of things in the future.

The joy ride ends here, if you are still reading.

The app is not finished (spaghetti code and low test coverage are definitely in) but the MVP is.

I don't really have conclusions but I'm going to leave you with a few resources:

rhymes
rhymes
Such software as dreams are made on. I mostly rant about performance, unnecessary complexity, privacy and data collection.
• Mar 26 '18

rhymes
Such software as dreams are made on. I mostly rant about performance, unnecessary complexity, privacy and data collection.
The dangers of the unibrow(ser)
#discuss #webdev
Come with me on a journey through this website's source code by way of a bug
#webdev #rails #opensource
I broke login for 80k users
#ruby #webdev