There are many reasons for choosing Kubernetes for deploying your React application:

With this post, I'll demonstrate how to deploy a React application to a Kubernetes cluster with five easy steps. To follow the article you just need basic Docker knowledge.

I start off with a fresh React application created with create-react-app from Facebook:

This will create all the required configuration and files to start developing a new React application.

If you have an existing React application you can skip this section and continue with the next one. Just make sure you have the production build of your application available at build/.

For deploying the React application to Kubernetes, we need to package it inside a container. Kubernetes supports several container engines, but Docker is currently the most adopted one.

To create a Docker container we need a Dockerfile at the root level of our React application folder. This file defines what OS is used, how it is configured and what other applications are running inside this container.

For this example, I'm using nginx to serve the content of the React application and the simplest Dockerfile looks like the following:

Our Docker container inherits everything from the official nginx:1.17 Docker image and just copies the React production build to the container.

To speed up the creation of the Docker container, make sure you add a .dockerignore to your project to exclude the node_modules from being sent to the Docker context:

Once you have your React production build in place, start your Docker engine and execute the following command to create the Docker image:

For a more production-ready Docker container, make sure you customize the nginx configuration for your needs.

Step 3: Connect to your Kubernetes cluster

To start your local Kubernetes cluster, open the Docker Desktop preferences and switch to the Kubernetes tab: 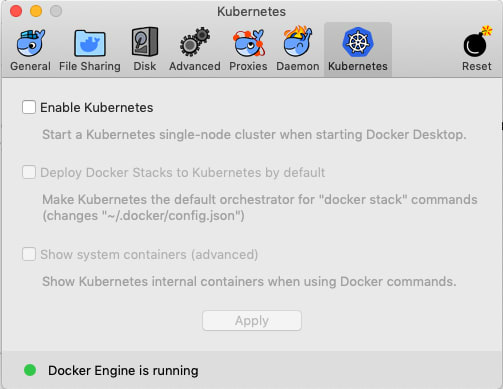 Here you can enable the Kubernetes support. If you enable it for the first time, the cluster creation may take some time, as several Docker images are downloaded in the background.

Once your local Kubernetes cluster is running, connect to it via kubectl (if missing, download here):

With this Kubernetes support of Docker Desktop you'll get a local single node cluster which is nice for evaluation and learning purposes.

If you want to deploy your React application to a Kubernetes cluster in the cloud, start here:

Step 4: Upload the Docker image to your container registry

You can create a local Docker registry with the following statement:

For uploading our previously created React Docker image, we have to tag the image with the hostname and port of the registry:

And can now finally push the image to our Docker registry:

Now we are ready to deploy the application to the Kubernetes cluster.

Usually, every Kubernetes object (service, pod, deployment, etc.) is described in a .yaml file but .json is also possible.

For deploying the React application to Kubernetes we need a so-called deployment. This Kubernetes entity makes sure our application will have as many replicas (parallel pods) as we define. In addition, we can define the Docker image we want to use, what ports are used and further metadata for our application:

With just the deployment we wouldn't be able to access our application from outside. To expose applications, Kubernetes offers a so-called service. Using a service we can define which ports to expose to the cluster/outside.

There are several different types of a Kuberntes service and I'm choosing the simplest one for your example: NodePort. This type will expose a defined port on every node in our Kubernetes cluster (with the local Kubernetes cluster, we just have one node) and map it to an application's port:

Both the service and deployment can be added to a single .yaml file with a --- for separation. In our example, I've created one deployment.yaml file to store both:

You can now use this file to deploy your application to Kubernetes with:

And can check that everything is running using:

Once everything is up and running, visit http://localhost:31000 on your machine and you should see your React application, now served from a Kubernetes cluster: 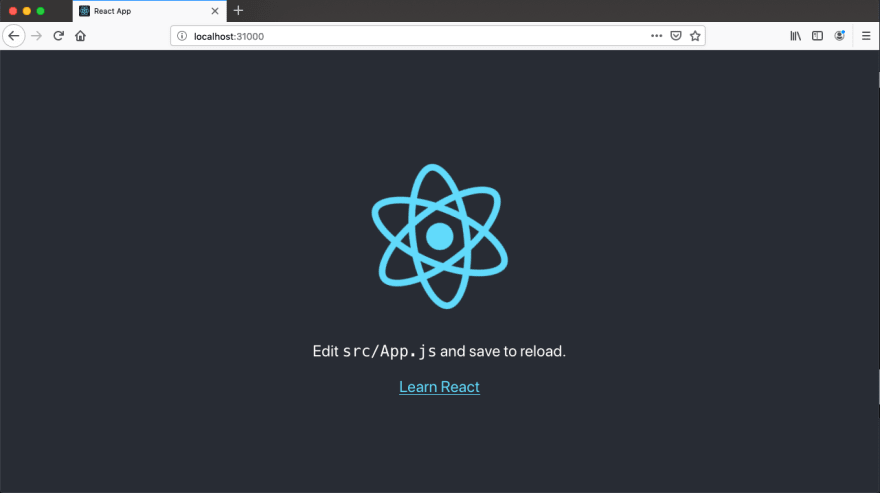 To remove the React application from your Kubernetes cluster, just run

You can find the whole codebase for this example on GitHub.

Have fun deploying your React applications to Kubernetes,
Phil

How I improved my React development experience by leveraging visual tools

Once suspended, rieckpil will not be able to comment or publish posts until their suspension is removed.

Once unsuspended, rieckpil will be able to comment and publish posts again.

Once unpublished, all posts by rieckpil will become hidden and only accessible to themselves.

If rieckpil is not suspended, they can still re-publish their posts from their dashboard.

Once unpublished, this post will become invisible to the public and only accessible to Philip Riecks.

Thanks for keeping DEV Community safe. Here is what you can do to flag rieckpil:

Unflagging rieckpil will restore default visibility to their posts.