These series of articles are based on the Paul O Shannessy - Building React From Scratch talk that he gave in 2016.

He also uploaded source code to the GitHub repo.

Unfortunately, the talk was only 30 minutes long and to fully understand each part of this simplified implementation of React.js I spent days reading the source code and the comments. Even though the comments and the talk were super helpful, some parts of the code were like rocket science to me, especially recursive labyrinths of madness, until I was enlightened.

And now I decided to create a series of articles based on my notes and 'aha' moments.

I also recently found out that React.js team added their annotations to Building React From Scratch talk. And this document is pretty good (I hope it was available when I first started deep dive in it) but I still decided to create my own, more detailed version, maybe someone will find it easier to understand.

Main points to consider before starting to read these articles:

Someone might ask a question "Why to spend time trying to understand the mechanics of the older version of React.js?"

Because I think you need to know "how it started" to understand "how it's going".

Let's start with refreshing our memory about how elements are described in React.js without using jsx.

I also want to clarify that by saying element I mean two things:

As you may know, typical React.js application starts by calling ReactDOM.render function where we pass an element as the first argument and a node which we use as a mounting point as the second argument.

To simplify things I want to add one restriction: we pass only class component element as the first argument to ReactDOM.render.

Let's look at how we would implement this render function.

isRoot checks if our node has an HTML5 dataset attribute with the name data-root. We set this attribute in the mount function, which we will discuss later.

Since initially we didn't mount anything to the node and didn't set data-root attribute we skip update and call mount function.

In the mount, we set data-root attribute of the node to signalise that we are performing mounting.

Then, we instantiate the class component. Let's discuss what it means.

instantiateComponent will be used in several places and several conditions will be added to the body of the function in the future but for now, we just assume that element argument will be an object with the type field pointing to a class component.

From React.js docs: Class components have instances, but you never need to create a component instance directly—React takes care of this.

Well, in this case, we are building our own React.js so we have to take care of this :) Calling new element.type(element.props) in the following code snippet is the same as calling class constructor new App(element.props).

After an instance of the class component is created instantiateComponent function calls this strange _construct method of the newly created instance. But what the heck is _construct? Let's answer this question by trying to fire up what we already implemented. Spoiler alert: It will break.

We will create App class component and use a div element with root id in our HTML file as a mounting point just as we do it in a real React.js application. But watch carefully, doesn't something look suspicious to you?

Let's call our implementation of React.Component just Component from now. 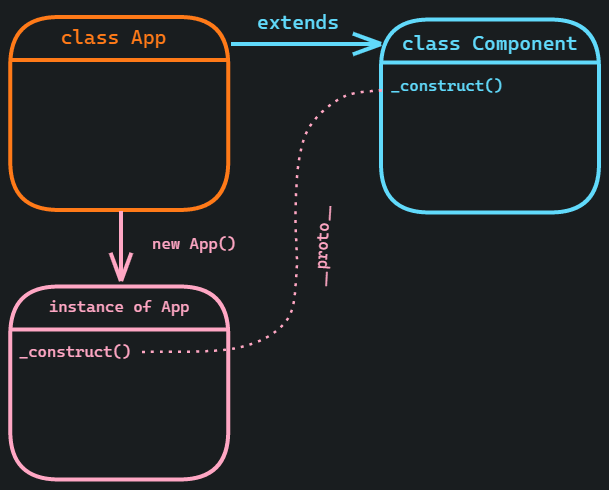 If you are not sure how classes and prototype chain work in JavaScript I recommend watching this video about it.

This is a flowchart of what we've covered so far: 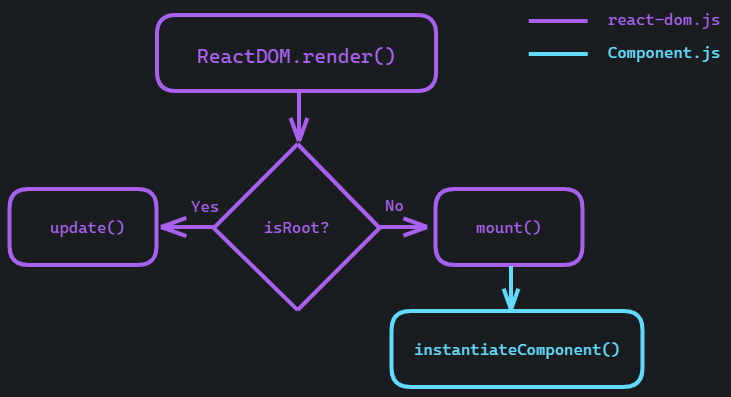 That's it for now. In the next episode of the Build your own React.js series we will implement Component class.

Working from the office or home?