Depending on how long you've been a developer, XML might be a term that sounds totally foreign. For others, it might bring back long repressed memories of some dark days. 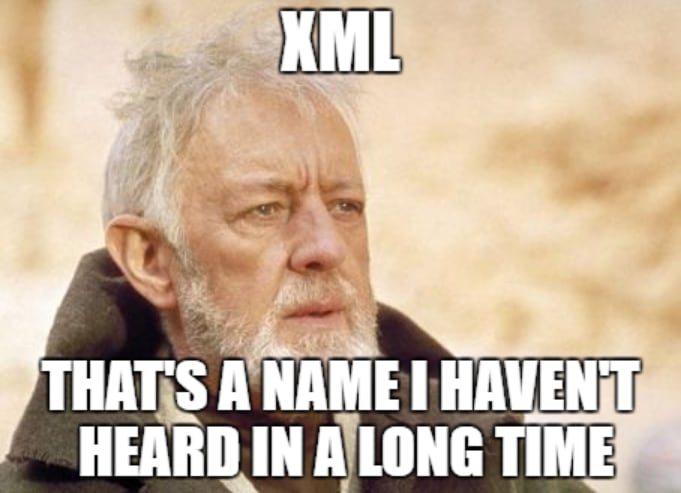 In many of my encounters with developers from broad ranges of experiences, I've seen the spectrum from the die-hard JSON lovers to the folks that believe XML is the one true encoding. Either way, if you have written any web services or Web APIs over the past decade, you've likely worked with one of these before.

This post is about the middle-ground on that spectrum: converting from XML to JSON and the many potential shortcomings of going down that road.

Ever created a Word document? How about Excel? Consumed an RSS feed? Designed an SVG? Configured a .NET application? Worked with just about any of the data industry standards (e.g. HL7, etc.)

If you answer yes to any of these, then XML played a role in some way, shape, or form. It's everywhere and pretty damn good at what it does. Heck! The .NET team tried to migrate away from XML during the infancy of .NET Core and ended up crawling back and scrapping the JSON-based alternative.

Now why does that matter? Well, let's say that you are building a brand-new application using Web API. You probably are going to be going JSON all the way, which could be a problem if you need to consume some old files that are XML encoded, thankfully there's a trick for that thanks to JSON.NET, which I'll probably safely assume is in your current application:

Likewise, if you needed to convert an existing JSON string into XML, well JSON.NET has your back there once again:

Now it's worth noting that if you are planning on returning this directly to the client to be consumed as JSON, you'll want to ensure that you have the appropriate content type set to "application/json"

Potential Bumps in The Road

As you might imagine with both these formats being so generic, there's probably a large likelihood of some crazy stuff happening during the conversion process - and you'd be right.

This Stack Overflow response from montewhizdoh does a pretty comprehensive job of explaining the major things to check for to ensure that your ride isn't too bumpy.

I'm sure that your mileage may vary and that every scenario might require a few data massage sessions to get everything converted across as expected. Hopefully, this will give you a few things to keep on the top of your mind should you have to work with any legacy XML files in your brand new Web API application.

How to Customize .NET MAUI Controls with Handler Architecture