When you work for a company that has multiple projects running at the same time and your job is to constantly context switch between projects, it becomes nearly impossible to wrap your head around given the project and problem at hand to work on.

Sometimes I am writing K8s ingress configuration for Azure managed Ingress controller where I am required to open up the terminal with Kubectl client configured with the appropriate context, setup VPN connection, open up K8s dashboard to tail logs and sometimes I am writing Dagster pipeline in Python where I am required to set up Redis instance, Celery worker, Rabbitmq, Python’s Virtualenv required, etc etc etc.

I have to sometimes work on 4 to 5 projects in a day and switching between these projects was becoming a pain in my brain. And the worst thing was, it sometimes took me half an hour to switch to project and set up bells and whistles and finally 3 minutes to fix a bug/issue at hand.

I knew it was getting out of my hand and I had to do something about it. I knew one open-source tool called TMUX that could potentially solve my issues, but I had not given serious thoughts. I started playing with Tmux once again, it gave me a way to create multiple terminal windows, split a single window into multiple child terminals (also known as panes), switch between multiple terminal windows, and a lot more. It also gave me a way to manage multiple projects simultaneously by allowing me to create multiple tmux sessions. I was super pleased with what it had to offer. 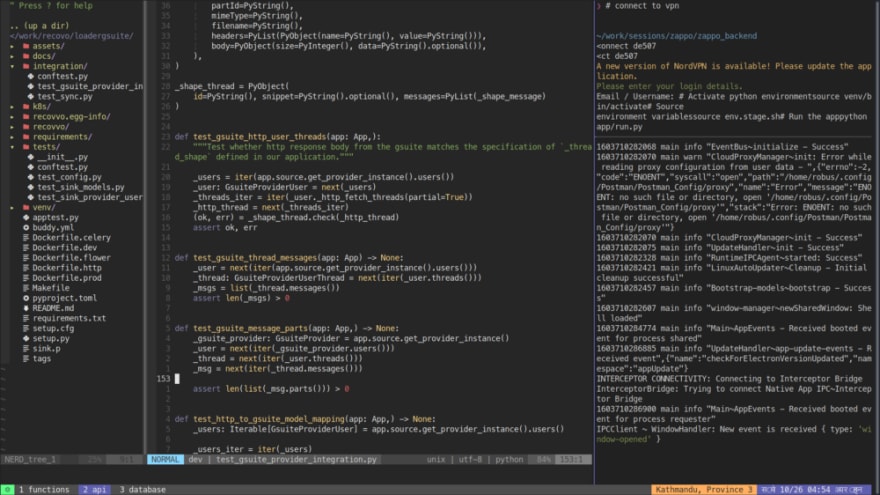 The above image shows my setup where I have three windows setup for a single project. They are called function, api, and database. I typically name a window based on what they are intended for. If I need to write/debug SQL queries, I would quickly switch to the database window and I would switch to api if I need to work on the API side of the project. If you look closely, the API window consists of 3 child terminals called panes where I keep Neovim(code editor), Virtualenv activated terminal and Postman process running.

Tmux was a game-changer for me. It gets even better if your primary code editor is Vim. Vim + Tmux simply deserves its Own blog. If I were to put it in one sentence, its nothing but Match made in heaven ❤

Okay, now I was able to manage multiple projects using sessions and create multiple terminal windows using Tmux’s windows and panes, you might be wondering if there is anything left to polish. And the answer is YES and here are the reasons below:

Why another tmux session manager?

Copy paste this in your terminal

This will install mx script in your path. Run mx to verify the installation.

Below steps assumes that you have a working knowledge of tmux and you understand the concepts of windows, panes and sessions in tmux. Also, you are able to attach and detach to tmux session. If you think you are rusty around these topics, you could reach out to man page or this awesome quick tour blog.

The above configuration file manifests the following resources:

Hopefully, this should give an idea of how you could extend this configuration file to add windows/panes/command to your likes. If you are wondering, how would the above configuration manifest in an actual Tmux session, below is the screenshot. 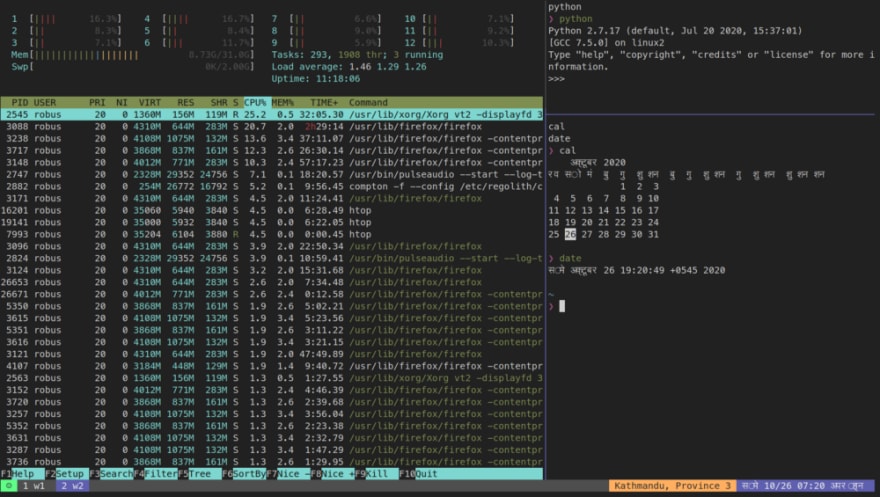 Finally, the way you spin up the new session that is configured to my likes with all the required dependencies is simply

And if I want to delete the session named mojo

Yup, I am serious. Below is the demo where I am spinning up a project that requires the following components:

All these setup now requires single command and about 7 seconds to roll. Pretty happy now that I can switch between projects in seconds and let mx.sh automate everything from starting my code editor to ssh into a remote machine.

I hope this article is useful for those who are suffering similar symptoms of having to spend most of the time getting that initial setup right. If you find my project useful or think you could make improvements, let's do that too.

Once suspended, robusgauli will not be able to comment or publish posts until their suspension is removed.

Once unsuspended, robusgauli will be able to comment and publish posts again.

Once unpublished, all posts by robusgauli will become hidden and only accessible to themselves.

If robusgauli is not suspended, they can still re-publish their posts from their dashboard.

Once unpublished, this post will become invisible to the public and only accessible to Robus Gauli.

Thanks for keeping DEV Community 👩‍💻👨‍💻 safe. Here is what you can do to flag robusgauli:

Unflagging robusgauli will restore default visibility to their posts.