TL;DR: This is a post for beginners where I show:

I build a wrapper for the Magic: The Gathering API (an SDK, by their own terms). And I did so because I wanted a personal project that offered the following possibilities:

The reason why I chose the Magic: The Gathering (MTG) API (besides being a MTG nerd) is because it is a very simple API (it has only GET methods).

This is not a tutorial, I will just highlight the interesting choices this endeavour led me to. Also, this is for beginners; I highly doubt I will say anything new to someone who had carefully read The Book and Rust by example and toyed with async a little bit (although we never know).

The result can be found here.

I had two choices:

I chose the left one for two reasons:

How it is (left option): 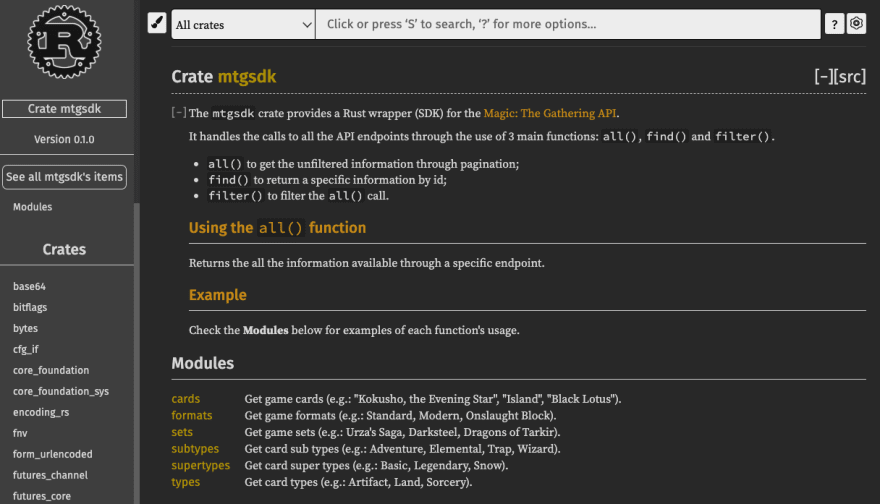 If you want to see for yourself, fork/download the repository and type cargo doc --open

How it would be (right option): 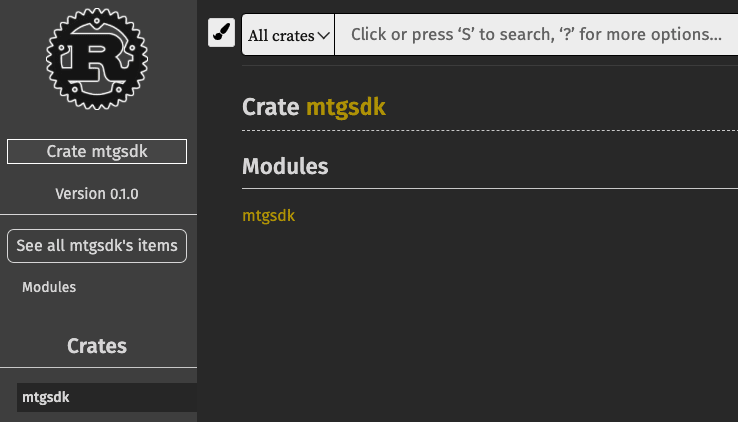 Maybe the first image and Rust by example is enough to show how each way of doing this is carried out; however, for the sake of clarity, I will say this: If you want the left one, all you have to do is to declare the mods in your lib.rs. Otherwise, you have to create a folder with your single module name, create a mod.rs file in it and use the mod and pub mod inside it, declaring only the folder name within lib.rs (in this case, lib.rs would only have pub mod mtgsdk;.

As I said, this API only has GET methods, and there's not much to talk about how reqwest handles it, for it is pretty much just passing a URL as you would do in a curl.

I am not saying that this is all that reqwest does; it is not. I am saying that for this API we don't actually need anything else that accessing the URL and parsing the Json (more on this later).

However, instead of repeating the reqwest::get(url) inside every module, I created a query builder that receives an url and returns a Result<T, StatusCode> where T is a struct containing the data for the various calls (cards, formats, etc.).

Besides allowing me to maintain the usage of reqwest in a single spot, it also allowed me to handle the errors and just send StatusCode, so the developer using this crate would easily handle the errors. Here is the code with some additional comments.

Pretty straightforward: the functions calling the build() function will tell which type T corresponds to, a type that will be a struct with the Deserialize trait so that reqwest's json() can do the heavy lifting for us.

The documentation section in the Rust Book is pretty good. Besides reading that, I only checked some examples of how documentation is managed in the crates I use.

What I want to highlight is the insertion of tests within the docs: 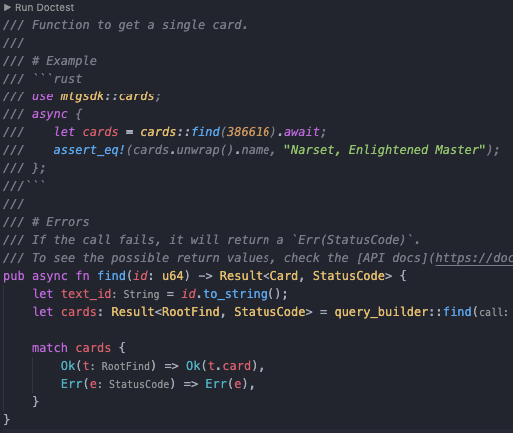 That this test will be executed is something that The Book talks about, so I will not stress about it. What was specific for me is that I was testing async calls, which required two minor tweaks:

I will not lecture about HOF, let alone explain anything about functional programming. The reason I ended up with this is because, instead of something like this Builder Pattern (this is from another wrapper for the same API)...

Why? Because as a developer I love how Option and Iterator, as well as crates such as warp, implement this, giving Rust its "functional flavour".

How to do it

The function filter() returns a struct called Where that has a vector where I keep all the filters that are going to be added.

So, when I do something like response = mtgsdk::card::filter(), the variable response is a Where struct, and that allows me to call any function implemented inside Where, e.g.:

So basically, when I called filter() and then added the functions game_format(), type_field(), cmc() and rarity() I was doing this:

Few things I want to mention:

Testing "as if" it was a crate

I wanted to import it in a new project, but I didn't wanted to send it to crates.io. How to do it? Like this:

In the new project's Cargo.toml I added this:

And that's all. In my main.rs I just used it as if it was a crate.

This might be helpful if you want to be truthful to what The Book calls integration testing.

Will Carbon language replace C++ fully in the future ?

Once unpublished, this post will become invisible to the public and only accessible to Roger Torres (he/him/ele).

Thanks for keeping DEV Community safe. Here is what you can do to flag rogertorres:

Unflagging rogertorres will restore default visibility to their posts.