In today's blog, I will share some of the most necessary information to know as a react developer. This is mostly useful if you are a beginner, but it will be an opportunity to refresh your knowledge if you already know them. Let's start.

React is a JavaScript library to build user interfaces. It is not a framework like Angular or something else.

Now library is not a fancy thing to describe. It is just a set of some reusable functions. There are hundreds of functions available in React. We call them and manipulate them with some data provided by ourselves. But what to do is the responsibility of itself. We need to only bother how we want our interface to look.

And libraries also gives us full control to manipulate its functions. In other words, libraries are flexible. React started its journey when tech-giant Facebook was facing problems maintaining its code especially the Facebook Ads App back in 2011.

There are three types of things we have to care about when we create any website. They are

We know content is controlled by HTML, presentation by CSS where the behaviour which is the most important factor for a dynamic website is controlled by JavaScript. Now to make them work altogether, we need something that could be accessed by all of the technology we use(HTML, CSS, JavaScript). What if we create and control all of the 3 concerns using just this 'something'. This will be much easier. From here the idea of the DOM first came. This 'something' we were talking about is nothing but DOM API.

When we create any content for the Internet using HTML, the browsers convert them to a document object which contains all the elements we mentioned in the content as nodes. If we assign different styles to an individual element, this gets also saved in its node in the DOM.

Now here is the good thing. We can access any of the contents and presentations using JavaScript to manipulate them for different conditions, in other words adding behaviour to make the content dynamic.

The above HTML will look like this in the DOM object. 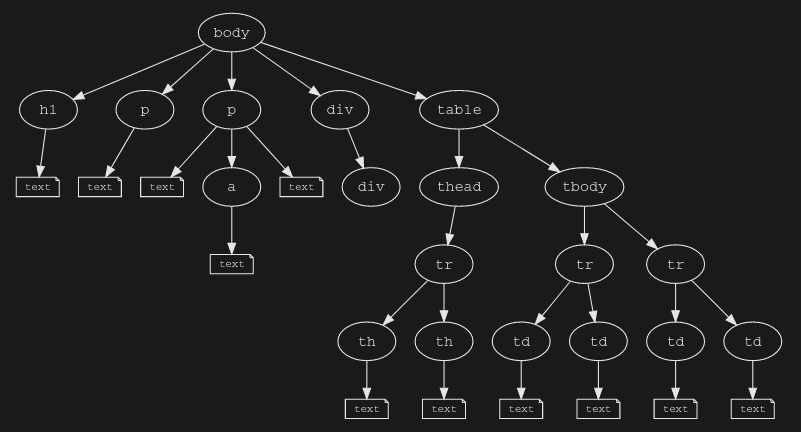 The image and the code are taken from here

You can think of react components as functions available in all of the programming languages. They have some arguments and they could return some information to the caller. We can create them in such a way that they become reusable.

A react component can describe a smaller part of a UI. And this smaller part is reusable with different arguments. Even we can use a component inside another component. In this case, the prior component will behave like the child component of the later one. Let's see an example of a component :

We are putting Text component inside App component. And at last, we are rendering App in the browser. We will discuss later how this code is working under the hood in a later topic.

We should design or create a component in a way such that it is only responsible for a particular thing. It makes the components reusable and maintainable.

If you notice we start the name of a component with an uppercase letter. It is not a convention! It is necessary. The reason? It will be discussed in the 4th section.

If you already have started with react, you could have started a react app using create-react-app. It sets up an environment to create a react app. It not, here is the link to take a look.

After creating a react app, we will have several files and folders available in the environment. 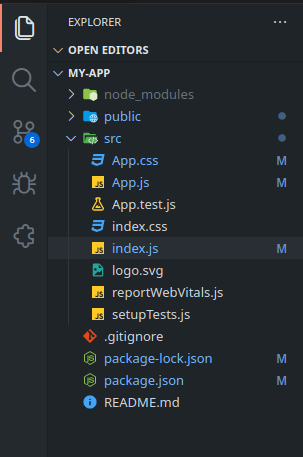 Let's open the index.js file now. Inside the file, I have found this...

But where is React.createElement? Ok. Now go to here and copy the above code at the left pane and notice the right pane. This will be like the following...

We use React.createElement to create a react element. We have seen that we were creating div elements in the content section. But if we load them in any browser, the browser has to create a DOM object that contains all the div elements or other elements as objects, we have called them nodes.

Here the same thing is happening but in a different complex style. Look at the first code block, firstly we are importing App which is a component. And then we are using this inside ReactDOM.render to get rendered on the browser window. If you notice we are not writing HTML inside return statement. But it looks like something that follows HTML syntax. It's called JSX.

JSX syntax is easy to understand and code as it has HTML like syntax. But the second code block is showing what is happening under the hood. We are creating react element object using React.createElement. This conversion is called transpiling. create-react-app uses Babel to transpile any JSX. We could also create these objects directly. However, it is more complex and hard to maintain. So thanks to transpilers to give us some comfort.

React.createElement could have many arguments ( when we want to use child components ).

It may be confusing that we are importing App component to use it as an argument in the createElement in index.js. Let's see what App component returns to the index.js by using Babel tool.

null means this element doesn't have any attribute.

Hence the App component is returning a react element. Now at the time of processing App component, there is another argument that is the only child component. So again let's get into this component and see what it returns( after transpiling obviously! )

In the previous, we left a question without answering. Why must we start a component name with an uppercase letter?

Now in the Text component, we used another createElement method to create another element and passed some arguments also. But where will these attributes be passed to? Will they go to their last destination, DOM API? Continue to read! We will build the idea and try to get the answer.

Before going any further, let's know some informative things about JSX.

Yes! It just makes the syntax familiar to us. As we saw earlier instead of writing react components using React.createElement, we can use JSX which has a syntax very similar to HTML. But before using this code, we have to transpile them using any transpiler like Babel.

So JSX will parse user-defined components as reference whereas normal DOM elements as a string. If we don't follow this rule, there will be an error for sure.

We can also show nested components in JSX :

As we said earlier, components are like normal functions in JavaScript. We can pass some information through arguments and they can return based on this information. Another thing to remember that this data passing only happen from the parent component to the child components. Though we can do the reverse by applying some trick, for now, let's only care for the first thing.

For normal function, we write Text = (color, text). But here we have written props because in class components of react there is a built-in object that holds the passed arguments. But till now, we have only written functional components. They follow the same processing of the arguments: holding all of them in an object, but the object is not named props. Hence we can give any name to this object. Though props should be used as a convention ( taken from class components ).

We can also use object destructuring to parse attributes from props.

In the 4th section we have left a question about the final destination of core DOM elements or where do they get passed at last?

The browser window updates itself every time if there is a single update on the DOM tree. It is not necessary, it should update only the particular part of the DOM that just has been updated at any particular time. To prevent this performance issue, react introduces another DOM tree that holds all the available objects ( aka react elements ) and stores this tree in the memory.

Hence virtual DOM tree is just a copy of the real DOM tree. So when we add a new element through JSX and made any changes in the JSX the whole virtual DOM gets updated. So we are actually

At the time of using react, there is something different that happens when we update any component( any of its data ). When we do any DOM updates, the whole DOM gets updated by the browsers and repainted in the browser. This is a lengthy process as the browser has to analyze the whole DOM and reload the page with new changes ( though we have only changed a little part of the DOM, it don't care! ).

This expensive operation makes the user experience slow. React finds the solution by storing and analyzing the changes every time we try to render a component. When we try to render some a component, firstly it will create a new version of the whole tree but virtually or in the memory. Then it will analyze the current tree with the tree that already exists and finds the changes and define the minimum part of the tree to render in the browser. This is called 'Tree reconciliation'.

After defining the changes, it will update them in the real browser DOM, not the whole DOM. Let's see how :

Firstly go to index.html file of your react project and add two div's like the following :

And then we are going to create the same element with different methods. One with core DOM methods and the other with React render and createElement method in index.js.

ReactDOM.render accepts two arguments. The first one for a react element and the last one for setting the first react element to a specified DOM node ( available at index.html ). Now we are going to do update the time continuously after every 1 second.

If we now notice what is happening to the DOM, we have to inspect.

Firefox Inspector is highlighting the updated element consistently. But if you look carefully, in the case of react element, only the date string is updating. On the other hand, the whole root1 element is updating after every 1s. The reason is that react is only updating the necessary element or component out of the whole DOM ( tree reconciliation ).

Once suspended, rohittz will not be able to comment or publish posts until their suspension is removed.

Once unsuspended, rohittz will be able to comment and publish posts again.

Once unpublished, all posts by rohittz will become hidden and only accessible to themselves.

If rohittz is not suspended, they can still re-publish their posts from their dashboard.

Once unpublished, this post will become invisible to the public and only accessible to Rohit Roy.

Thanks for keeping DEV Community 👩‍💻👨‍💻 safe. Here is what you can do to flag rohittz:

Unflagging rohittz will restore default visibility to their posts.