Many of us have different requirements and different complicated setups.
Prometheus has provided us the true power of monitoring and observability, Thus, I'm still learning and figuring things out every single day.

One of the most recent requirements I had, that we have to monitor a certain route of accessibility to maintain applications performing correctly. With out-of-the-box tools' functionality, the monitoring system is always the source, where our case is different that we need to make sure that System-A is reachable from every network in the datacenter.

To have a simple and less complicated example, let's take north-ntw, south-ntw and west-ntw to reach the internet by probing https://wikipedia.com
by this I mean, we are monitoring egress traffic in each network whether it could reach the internet through different routes with reasonable latency.

We're going to use Prometheus as a server and Blackbox Exporter
The blackbox exporter allows blackbox probing of endpoints over HTTP, HTTPS, DNS, TCP and ICMP. It's often used to be installed alongside to prometheus server and this makes the prometheus server is always the source.
Here is the trick, we're going to deploy blackbox exporter on every monitored network and instruct prometheus to scrape those exporters as a source of probes to assure that System-A (aka Wikipedia) is reachable from those networks.

You can follow as many as guides and tutorial on how to install Prometheus and Prometheus exporters, however, here's a quick win with ansible and playbooks for ansible-roles from the great team at cloudalchemy:
ansible-prometheus and ansible-blackbox-exporter
I will leave the installation part for you to be done in your preferred way

target under the params section defines the destination that you want to reach which is https://wikipedia.com, whereas the static_configs targets are the little blackbox-exporter that we are probing from. 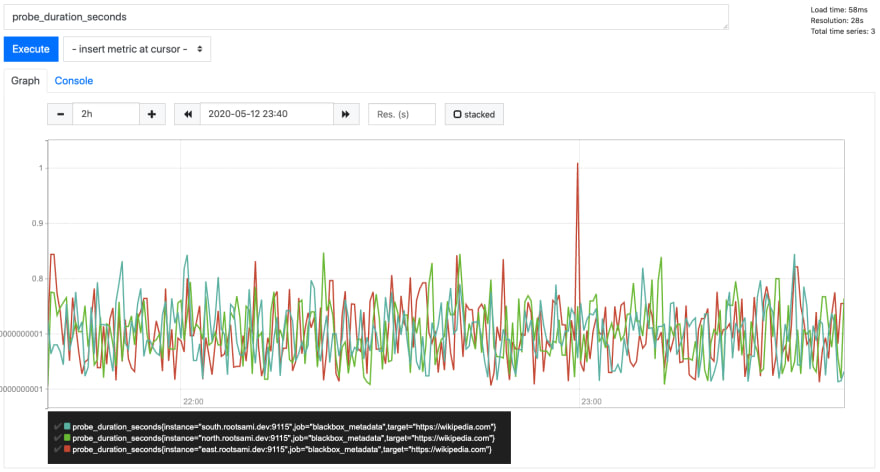 As shown above, target endpoints are the deployed exporters which are being scraped by prometheus server and showing that Wikipedia is reachable from that network, as well as latency can be measured from each source.

Monitoring and observability have no limits, tools are there! All you have to do is to find the blind spots to maintain systems up and running at all times.

Setup an everyday alert for your AWS usage bill

How to monitor Redis with Prometheus and Grafana | Docker

Sami Alhaddad
Linux and SRE, Which explains so many things!
What text editor should I use? ⌨️
#programming #discuss #productivity
We are trending on Github, This is how we did it 🤯
#discuss #javascript #webdev #productivity
What was your win this week?
#discuss #weeklyretro

Once suspended, rootsami will not be able to comment or publish posts until their suspension is removed.

Once unsuspended, rootsami will be able to comment and publish posts again.

Once unpublished, all posts by rootsami will become hidden and only accessible to themselves.

If rootsami is not suspended, they can still re-publish their posts from their dashboard.

Once unpublished, this post will become invisible to the public and only accessible to Sami Alhaddad.

Thanks for keeping DEV Community safe. Here is what you can do to flag rootsami:

Unflagging rootsami will restore default visibility to their posts.