Previous articles in this series:

September and October were relatively quiet, so I thought I would write a single article for both months.

While I'd normally try to write at least one useful article per month for OnlineOrNot's audience (as well as an update on how the business is going), I wrote no articles, and no code, actually. Instead, I packed up my life in Sydney, Australia, escaped lockdown, and relocated to France with my wife, and just enjoyed living for a while.

It took just over a month to get over my jetlag, mild burnout from spending months in lockdown, and get back in the groove of working full-time and building OnlineOrNot in the hours before work.

Massive bonus of living in Europe: most of my users are either in this timezone, or nearby (Hi North American friends!) so I'm no longer emailing them at 1am their time.

In October we experienced our first month of negative revenue growth, as of the start of November 2021, we have:

(numbers in brackets are relative to the last update)

You'll notice that a single customer represented more than half of OnlineOrNot's MRR. While it hurt to lose them as a customer, they didn't leave due to missing functionality. Their business helped OnlineOrNot scale rapidly, and I don't lose those gains. For example: from the efforts of keeping them as a customer, our backend scaled from only just handling a few dozen simultaneous Uptime Checks to almost fifty thousand simultaneous Uptime Checks.

While I wish I could say it was beautiful to know I had a business running in the background that requires almost no input from me, it's still extremely early days, and OnlineOrNot's growth engine doesn't work if I'm not routinely writing articles, and interviewing potential customers to improve the product's roadmap.

OnlineOrNot did however manage to continue attracting users without my input thanks to previous marketing efforts: 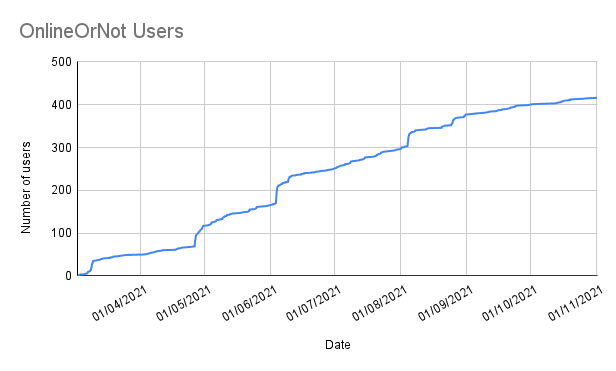 It's now a matter of converting free users to paid customers.

Since coming back to work, here's what I've released:

For context, OnlineOrNot is currently three services in one: 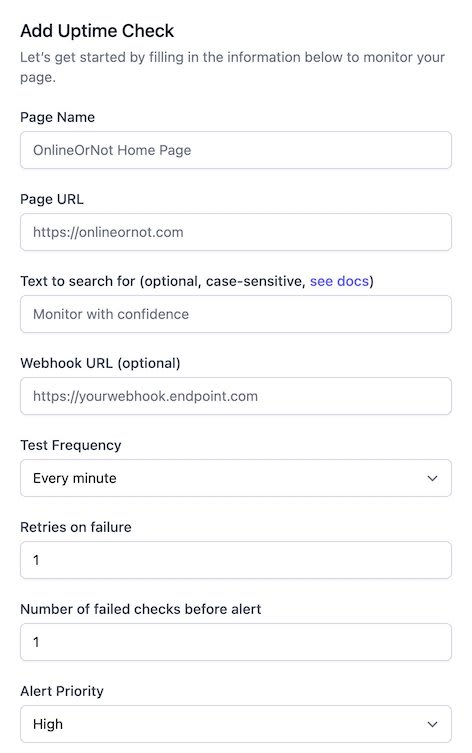 I wound up in a situation similar to tech debt, that I call "UI debt". I would get requests for more features that I'd need to add to this form, while also handling support tickets from customers confused about what certain fields do.

After a fair bit of customer feedback, I decided to redesign the Uptime Checks form to allow me to keep providing functionality for power users, while keeping the average use case simple: 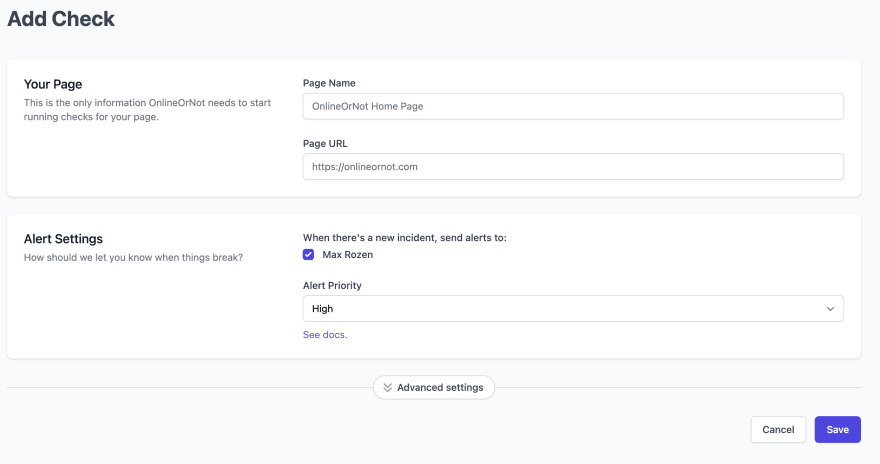 Losing half my MRR from a single customer made me realise I need to talk to more customers and potential customers to understand how I can better serve them with OnlineOrNot. I'm currently reading Michele Hansen's Deploy Empathy and have re-read Rob Fitzpatrick's The Mom Test to get better at this.

In terms of marketing, I'm getting back in the groove of writing an article every two weeks on DevOps/SRE topics, which I'll also be releasing on this blog.

Max Rozen
Frontend Dev at Atlassian. Writes about React & building a SaaS while employed. Building OnlineOrNot.com.
Building a SaaS in one week: How I built OnlineOrNot
#saas #react #nextjs
Guidelines to help you avoid losing your domain
#webdev #frontend
Keeping up with React Libraries
#react #webdev

Once suspended, rozenmd will not be able to comment or publish posts until their suspension is removed.

Once unsuspended, rozenmd will be able to comment and publish posts again.

Once unpublished, all posts by rozenmd will become hidden and only accessible to themselves.

If rozenmd is not suspended, they can still re-publish their posts from their dashboard.

Once unpublished, this post will become invisible to the public and only accessible to Max Rozen.

Thanks for keeping DEV Community 👩‍💻👨‍💻 safe. Here is what you can do to flag rozenmd:

Unflagging rozenmd will restore default visibility to their posts.