Creating a well tested application pays off by having a lot less to debug in the future, together with the peace of mind that you can refactor your application as much as you want and nothing is going to break because the tests would alert you quickly if that happened. Automating your deployment will also pay off, not only because it will save you a ton of clicks (or commands) but because it will prevent errors and your builds will be predictable. If they fail, it will be because they have a legitimate reason to fail, not because you forgot to type a command somewhere.

I have created a very trivial application to showcase this. It's a web server where you can go to an url that includes the title of a movie, and the browser will display a basic page showing the poster for it. There is no storage. Everything is achieved via the API of OMDB, so if you want to fully recreate the exercise, you will need your own API key, which you can request here: http://omdbapi.com/ 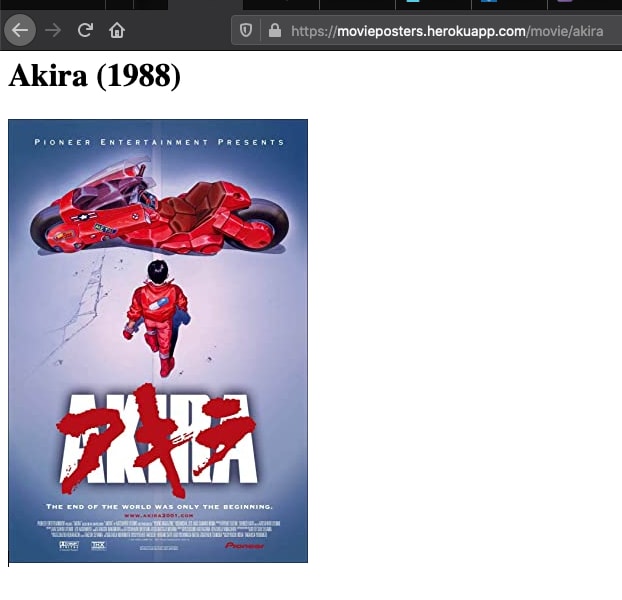 I am going to highlight only some important parts of the code, but you can find the full source in my repo: https://github.com/rubenwap/movie-poster-server

Also, you can try a live version here:

Structure of the project

We start initializing the project with

That way, as you add more dependencies, the mod file will keep track of them and be useful for tasks such as re downloading them.

The main files you are going to need to create are:

omdb_test.go: Your tests will live here

cases_test.go: Auxiliary data used by your tests will live here. We could include that data in omdb_test.go but the file would look too polluted and confusing, so let's have this one separated.

Ok, so you have made your planning and you know what do you want to achieve. You know that you need this function and that other function. In my case, I wanted to build:

I am going to create tests for the first three functions.

To do that, my cases_test.go will include slices of structs for each function with the contents:

Look at the full file here:

After I have defined the cases, I will create a test function (that by the way, will fail, because there is no real function in my omdb.go code yet).

Building the full URL for the API call

So I head into omdb_test.go and do:

If you analyze this test, you will realize that you can reuse this same function with minimal changes for most of the stuff you want to test, since it's just comparing what you are getting upon running something, against what you expect to get.

If you use VSCode with the Go extension, you get handy buttons in the top of each test to click and run them. If you prefer to launch them via terminal, type:

where the v parameter means that you want your output to be verbose, which I find is quite useful.

Since we don't have function yet to use with this test, let's write it. In our omdb.go file this would look like:

Note that the API key is an environment variable. We will take care of setting that up in your Heroku deployment and Github Actions a little later. In the meantime, for your local development you can set them up in macOS terminal like this:

or if you use Windows, you can open PowerShell and do this (correct me if I am wrong, since I don't have a Windows computer to test!)

So if we run our test at the moment, it should pass.

Use mocking to test the API call function

The test number 3 (compare that the JSON from the response equals to the struct that we expect to produce in the transformation) also follows this scheme of "compare this value against this other value", so you can check the full source in the repo, but I want to stop for a moment with the test number two, since it includes an interesting technique you will need to know: Mocking a response

So what is mocking? Imagine that you need to test a function that does something against a third party service, in this case the OMDB API. Will you need to call the remote API every single time you need to run the test? Not a good option, not only because it will slow you down quite a bit, but also because in some cases if you are contacting a rate limited API, it might mean a big hit on your rates. Also, it's totally unnecessary. Is also not your job to test whether their API works. The only thing you need to know is how will your function behave once it receives the content, so you only care about the content.

In order to achieve that, you will use a mocking library, which will simulate a fake response upon calling an URL. For example, you can configure it so every time your test does a request against the url [mytestingurl.com](http://mytestingurl.com) it receives the response [{"test":"cool"}]

So look at the code for the mocking test:

We are setting up an httpmock (using the github.com/jarcoal/httpmock library, although you have many other options) and we are registering that whenever we do a GET request against a certain url (in this case the url is defined in the c.input variable) then we should receive a response (which is the c.expected variable). To make it clearer, look at those values:

So, the mock is set up so whenever in the test we contact the URL in input, we shall receive the response in expected.

Put the movie contents into a struct

We now have the function to build the URL, the function to make the API call and there is yet a last function, which transforms the JSON into a struct. In order to achieve that, we should have already defined a struct with the correct fields that describe a movie. This is the function. It uses json.Unmarshal taking as an input both your JSON, and the new variable with Movietype that you have created to hold the final value:

Please look at the definition of the struct here:

All the previous three functions are launched via an auxiliary function which does four things:

The HTML writing via Fprintf could be improved via using something cleaner such as templates, but in order to build this quick proof of concept, this will do.

All of the above is ran in the Go's main function via the httppackage:

If we dockerize our application, we will ensure that it can be painlessly deployed anywhere with ease. If you really really trust the process, you wouldn't even need to build the image yourself (since Heroku will take care of that) But if you want to give it a try:

Like I said, you could cross your fingers and let Heroku do the build, but if you want to test it locally:

You could deploy your application right now as is, we could go to Heroku and say, "Put this online!", but there is an extra step we can still do which will give us an extra quality reassurance.

Later when we have Heroku set up we will be able to do new builds and releases of our app simply by committing our code to the Git branch. What if we mess up? Imagine that we inadvertently make a breaking change. Wouldn't it be a pity to have done a "testing first" approach to don't take advantage of it now that we can?

That's what we are going to do. We are going to set up a GitHub Action with the basic steps for a Golang workflow, and that action will run the tests in our code. Then we will configure Heroku so it will only deploy our app if the testing has gone well.

You can create a new workflow in the "Actions" tab of your repo. This will create a new file go.ymlwhich will live in your repo, so if you are creating this file via the GitHub interface, then don't forget to do a git pullfrom your local repo, since what you are actually doing in the interface is committing a new file.

Let's look at that file:

If you look at the original file created by GitHub, you will realize that I have modified very little. You need to change the branches value depending on your needs, since this is telling us in which branches this action should trigger. Then I have also added two environment variables that are needed for the tests to run. I have added them both as secrets, even though the URL one is not really secret (but the KEY one definitely is!)

You add the secrets in the GitHub repo page, in the "settings" page for your repo, there is a "secrets" option in the menu.

So now we will deploy this. Open a Heroku account if you don't have one, since it's a really cool way to get your small side projects online without a lot of hassle and on a low budget (free, in fact). If you get a lot of usage and you need to upgrade to a paid option, there are many different options which can be discussed in another moment. 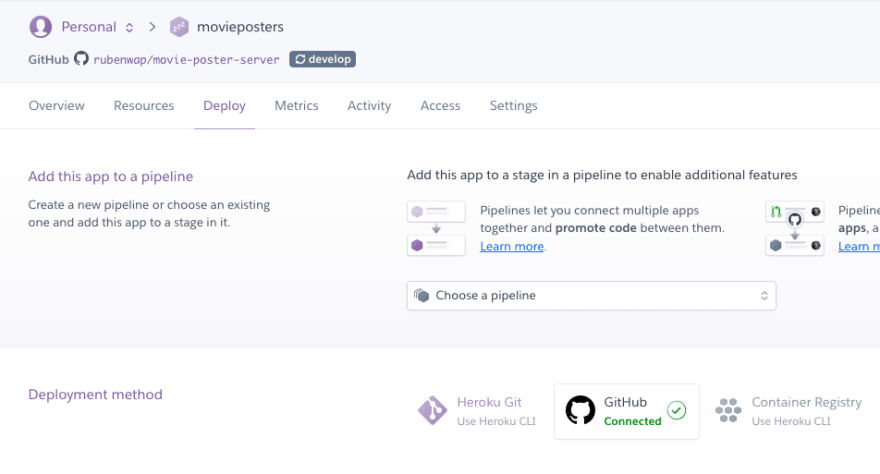 Having done this, your next commit probably won't create a working deployment yet. We need two tiny files in the repo that are required by the Heroku process. The Procfileand the heroku.ymlfiles:

That was the last step, so now, hopefully if you commit those two files to the repo, it will pass the GitHub Actions step (all tests will be ok) and then it will trigger a build in Heroku.

If it doesn't work, look at the common causes:

If all those three steps are affirmative, the Heroku deployment should also be fine, but don't forget to look at the Heroku logs in order to double check there is no issue in that side! Most common issues are timeouts or applications crashing, but they are almost never because of Heroku, but more often than not, because of an issue of the three common causes that you should test first.

I hope this was a useful guide. My goal is not so much that you build the very same exact thing I built, but that my steps can help you to understand what are the steps that you need in your own project. Please leave a comment if you have any doubt!

Snap Scroll in React in Less than a Minute