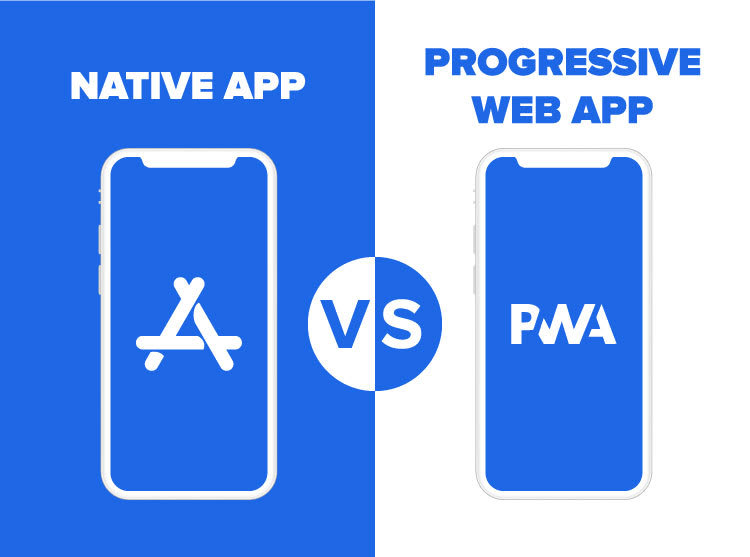 The advent of Progressive Web Apps has changed it all. Back in
2015, Google made an announcement stating that it would begin to favor responsive sites. Since then top brands can be seen shifting towards progressive web apps.

Progressive web apps have completely revolutionized the business space now. After evaluating the benefits of PWAs over native apps, business owners and strategists are in favor of using PWAs to grow their business.

No wonder there are millions of native apps existing in the app stores, the rise of PWA’s just can’t be ignored. The increased usage of Progressive Web Apps is because they represent the best practices for websites and applications or boosting business growth.

Here, in this article, I’ve discussed the advantages of PWAs over Native Apps. Here I’ve explained why businesses these days are choosing progressive web apps over native apps.

Let’s have a look at one of the biggest benefits of PWA’s over native apps. Today’s market is filled with a number of native apps competing to stand out from the rest. With the advent of smartphones, millions of apps can be seen plunging into the market space. The fight of the ‘survival of the fittest’ has become more intense than ever before.

Today’s app stores are jam-packed with millions of native apps. There is a lot of competition in the native app stores. Most of these apps are so well-known that they have become the first preference of most of the mobile users.

According to a report, WhatsApp was the most downloaded app on Google Play worldwide for Q2 2019 with more than 168.4 million installs, followed by Messenger, TikTok, Facebook, and Instagram.

As per the report, these are the top five apps that are being most downloaded by the users across the globe. If you intend to launch an app in an already crowded space, is the app store the best place for it? Do you think this would really work?

No matter how well your app performs, it should be targeting region-specific mobile app users. Before you make an app, you must look and consider what sort of app types perform well with mobile app users.

A report by ComScore breaks down the top 5 apps based on reach. Approximately 70% to 80% of all time spent by mobile app users are mainly in these four categories:

So, if your app doesn’t fall into one of these categories, would you still be willing to spend so much time and money to place your app in the app store. Spending a huge amount of money and time to make an app that can compete with already known entities in the app store would be an expensive risk to make.

Let’s continue our discussion on the advantages of PWAs over Native Apps. What’s the use of making an app if it fails to grow your business profits? This is possible only when your app is liked by the users. A successful app is one that allures your customers and keeps them hooked. Making an app requires a lot of time and effort. Who would be willing to invest such a huge amount of time and money for building an app that fails to improve acquisition & increase customer retention?

Being an app owner, you’d surely want to build an app that compels your customers to spend time on your app. When you’re able to find the right fit, you can surely improve your business profits from your native app. It’s all about how users respond to your app and how willing they are to download your app.

PWAs, on the other hand, does not require the user's commitment to download the app on one’s device. This is one of the major benefits of PWAs over Native Apps. The users may save the PWAs page on the home screen.

A well-designed PWA allows you to provide a much lighter-weight experience to users. Moreover, PWAs give users offline access, so that they can get access to your content no matter whether they are connected to the internet or not. 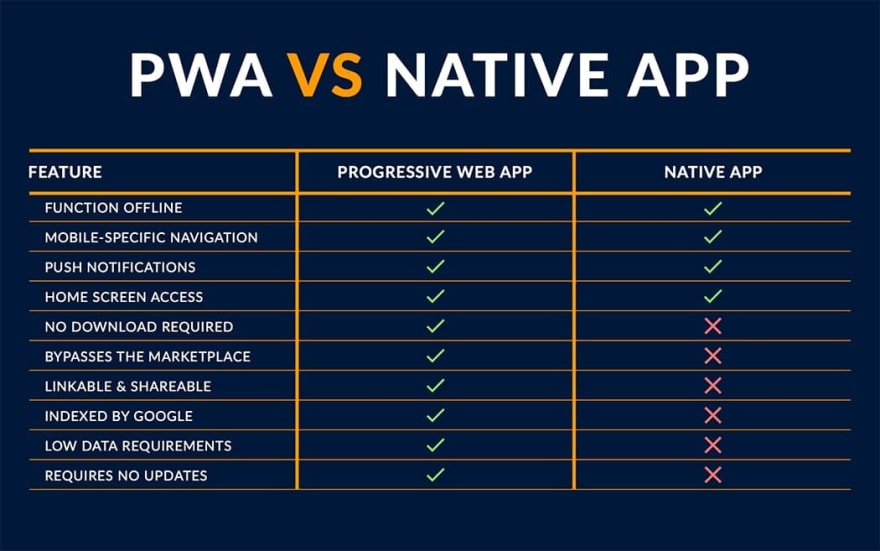 Why choose PWAs over Native Apps has become a trending question in the industry for quite some time now. Here is another reason why you should choose PWAs over native apps for your business.

No matter how great your app performs and earns a significant amount of revenue for your business, Apple and Google take a sizable cut from profits you make through a native app. This can be in the form of paid downloads, in-app purchases & upgrades, or subscription fees. A significant portion of your revenue goes straight into the pockets of the app store owners.

You need to pay for app store ads to increase the online visibility of your app. After spending money on updates, designs and promotional advertisements for marketing your app, giving a portion of what you earn is the last thing you would want to hear.

This is not the case with PWAs. They do not charge fees to pay-to-play, which means all the revenue generated through PWAs goes directly to you. Moreover, PWAs are significantly easier to build than native apps. Managing PWAs after the launch is easier than managing a native app as managing PWAs requires less time and resources as compared to native apps. This is one of the many advantages of PWAs over Native Apps.

PWAs Help To Save Cost

Last but not the least, PWAs help to save costs. This is why businesses these days prefer to choose PWAs over native apps. While the cost of building a native app may vary on the basis of design, user-interface, features, and customization that a brand might be looking for, building a PWA costs less in comparison to building a native mobile app right from the scratch.

These are some of the alluring advantages of PWAs over native apps that compel businesses all over the world to choose PWAs to increase profits and render a flawless user experience.

25 Places Where You Can Get Free Tailwind CSS Components

What technologies should you know to become a Front-End Developer in 2022.