A bit more than a week ago I finally quit my full time developer job to become an Indie Hacker. Finally, because life had led me to the point where trading the security of a well-paid developer job for the uncertainty of bootstrapping my own business was the only logical choice to make. Let me explain why.

Even though I wanted to become independent for a longer time already, I didn't actually take the step and do it before. The reason can be summarized in one word: security.

Security (as opposed to uncertainty) is one of the highest goals one can achieve. At least, that's what I was taught. The engraving of this idea already started very early. In primary school, all I wanted to do was play football (soccer), but the teachers were quick to tell me: "focus on school now, so you can eventually go to high school, where everything will be different and amazing." Apart from discovering computers and the internet, high school was oddly similar to primary school: "focus on learning now, and secure an entry into a great university".

At that point I started to wonder if life was nothing but an endless cycle of working towards more security.

After some years, I actually managed to get into a university to study law. Excited for my life to be awesome and secure forever, I went to my first lecture. You can guess the advice I got there: "focus on your studies now, so you can secure yourself a fantastic job as a lawyer later". At that point I started to wonder if life was nothing but an endless cycle of working towards more security.

The cost of security

During my studies, I taught myself programming as a hobby and side-hustle. I absolutely loved it! Despite spending most of my time learning web development, I didn't seriously consider switching to a technical study. Reason being that finishing my law degree was a more secure option than starting over. I didn't take the freedom and opportunity that being a software developer could give me, just to get the security of a law degree.

When you choose security over uncertainty, you trade in your freedom and opportunity

Which brings me to the cost of security: when you choose security over uncertainty, you trade in your freedom and opportunity. Where freedom is what you give up now and opportunity is future potential. Sometimes that's a good trade to make, but it all depends on the balance between security and uncertainty. 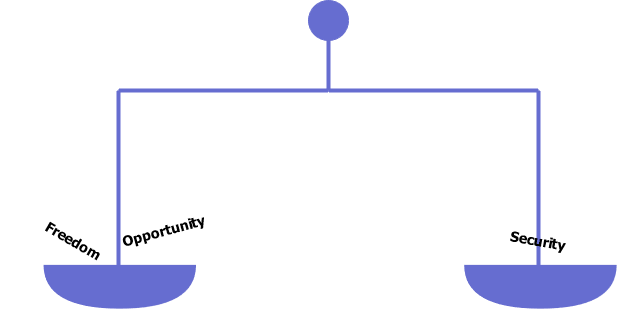 After my studies I finally became a software developer. A few years went by and eventually I ended up with the full time development job I had until a bit more than a week ago.

Back to becoming an Indie Hacker, and how it is only logical to choose the uncertainty of bootstrapping a business over a stable, well-paid, developer job.

While I had my dayjob, I got some ideas for products that I could make, but no time and energy to actually start making them. I had to make a choice: become independent, or stay at my full time job. This time I decided to try and find the balance between freedom and opportunity on the one side and security on the other side.

I was lucky to have the following securities:

That means that the coming 12 months, my basic needs are probably going to be met. The opportunity and freedom I get by bootstrapping my own business are immense, and very desirable to me. Even if I somehow fail, I would see this year as an invaluable experience. I conclude that at this point in my life, the stability and security of a full time job don't weigh against the opportunity and freedom of becoming an Indie Hacker.

This is the key to balancing security and uncertainty for me: once your basic needs are secure, it's only logical to take risks, if doing so gives freedom and opportunity.

That doesn't mean that I am not scared to take this step. However, when I wake up in the morning I feel excited to work on something I enjoy the most. Come to think of it, I think that the uncertainty actually adds to my excitement. That's the thing, some humans are just made to sail out in uncharted territory. To these people, uncertainty is preferred over security, and a great motivator.

Choosing authentication method for a project

What an Agile Software Development Team Structure Looks Like

ruudniew
Indie hacking to live a free and autonomous life
What is an indie hacker?
#indie #indiehacker #indiemaker
3 lies I told myself that lead to the failure of Likewise.li
#startup #indiehackers #makers #business