If you are new to JavaScript and struggling to understand the concepts of scope and hoisting, you are not abnormal. I remember how long it took me to get a firm grasp on these two tricky concepts. In this blog, we'll take a look at a simple example to help clear things up. 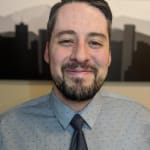 What will the browser's console show if the following code gets executed?

Stop. Don't scroll down and don't copy this into the DevTools Console, yet. Take a minute to look closely at the code and think about it.

The console will log undefined. To understand this, let's look at hoisting and scope in JavaScript.

Blocks like if statements and for loops do not create a new scope:

A variable declaration simply tells the interpreter that a variable exists. By default it initializes the variable to undefined:

A variable assignment assigns a value to the variable:

We can both declare and assign in the same line:

In Javascript, variable declarations are "hoisted" to the top of the current scope. Variable assignments, however, are not.

Returning to the original problem:

The declaration (but not the assignment) of text gets hoisted to the top of logIt(). So our code gets interpreted as though it were:

So we have a new variable text inside of logIt() that is initialized to undefined, which is what it holds when we hit our log statement.

Try looking into the differences when using "let" and "const" instead of "var" to declare variables in JavaScript. Also, what is a lexical environment and what does it have to do with the concepts covered in this blog?

Once suspended, rwparrish will not be able to comment or publish posts until their suspension is removed.

Once unsuspended, rwparrish will be able to comment and publish posts again.

Once unpublished, all posts by rwparrish will become hidden and only accessible to themselves.

If rwparrish is not suspended, they can still re-publish their posts from their dashboard.

Once unpublished, this post will become invisible to the public and only accessible to rwparrish.

Thanks for keeping DEV Community 👩‍💻👨‍💻 safe. Here is what you can do to flag rwparrish:

Unflagging rwparrish will restore default visibility to their posts.