RxJS comes with more than 100 different operators. SwitchMap is probably the one that is discussed the most often. It's a very powerful operator, being very useful in many situations, but it's also quite a dangerous one. In this blog article, we will talk about switchMap and also covers the issues it might introduce to your application. Additionally, we will cover the operators having a similar use case. This will make it easier for you, the next time you need to pick one of those.

A higher-order operator is handling an Observable of Observables. SwitchMap particularly is returning the notifications of an inner Observable.

This code example will be used to explain switchMap roughly. We will extend it later on, to take a deeper look at it.

But first things first. SwitchMap takes the values from the outer observable (returned by the of operator) and pass those as a parameter to a function which has to return a new observable. In this particular case, we are using the ajax module of RxJS (for reference you can find some information here). Here we are using the getJSON method to perform a get request and return its response as a new observable.

Technically, we are subscribing to the newly returned observable and passing its value to the next operator in the chain or as usual to the next handler in the subscribe method.

Now you are familiar with the basics of switchMap, we will take a deeper look at it. Don't worry if it may take a while to fully understand switchMap in detail. But if you got it, you will notice, that concatMap, mergeMap, and exhaustMap are quite similar. But first, let's dive deep into switchMap. As promised I extended the
example above and to make it more explorable I created a Blitz for it.
In the index.ts, you will stumble across the following piece of code.

Instead of passing one single value to the switchMap function we are now calling switchMap every click (for reference take a look at fromEvent). The fromEvent is used as an example for any kind of input stream. It could also be any other Observable you'd like to.
So as soon as you click somewhere on the page it will immediately log inside switchMap - click happened to the console. Afterwards, switchMapis called. This will also log inside switchMap - start http request immediately. At the end of the function passed to switchMap, we are returning an httpCall$ Observable. This will perform an HTTP request as soon as someone subscribes to it. Additionally, we are using tap again to log the value of the HTTP response.
<>
I already mentioned above, switchMap is passing the value of a source Observable and pass this to a function that needs to return a new Observable. SwitchMap will take care of subscribing to that returned Observable. But now there are two edge cases.

Both of these problems are visualized in the following marble diagram.
If you are not familiar with the marble diagram syntax, take a look at the Marble Diagram Section.

Please notice that all the following marble diagrams are kindly provided by Michael Hladky. 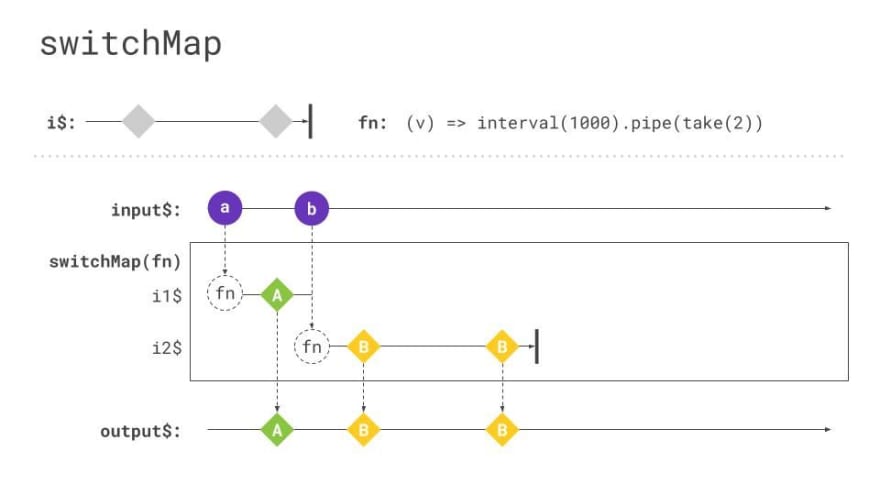 Let's go through these problems one by one. In case we returned a long-living Observable inside our switchMap function, we will see in the marble diagram, that all notifications are outputted. A very common example for a long-living Observable would be HTTP polling, where we request an API every X seconds and return its response. All those responses would be passed to the next operator in the Observable chain. As you can see in the i2$ Observable, both notifications are passed to the output$ Observable. Now that we know how switchMap handles long-living Observables, the second edge case arises. What happens, when the source Observable emits faster than the newly created Observable.
SwitchMap interrupts the Observable execution as soon as there is a new value coming from the source Observable. If you double-check this with the marble diagram, you will notice that the stream i1$ immediately ends as soon as notification b is coming. Additionally, it will trigger the new Observable i2$ and subscribes to that one.
We already said, that switchMap automatically subscribes to the inner Observable. Additionally, it automatically unsubscribes from it, as soon as there is a new value coming from the source Observable. This means that switchMap also includes a build-in subscription-management mechanism.

You can experience this operator in the linked Stackblitz example. It will trigger an HTTP call after you clicked somewhere. If you click fast enough you will notice that some of the HTTP calls are canceled. You can see that in the network view of the Chrome DevTools. If one of the requests is labeled with canceled, this means, that the Observable, that executed the HTTP call, is unsubscribed from.

Now that we know about switchMap, I'd suggest, let's take a look at the other operators.

So now it's time to keep my promise. I already mentioned switchMap is very similar to concatMap, mergeMap & exhaustMap. So what's the difference?

Maybe the following marble diagram sums up the behavior of concatMap quite well. Instead of interrupting i1$ as it used to with switchMap, it waits for the completion of i1$ and buffers the notifications in between, like b. After the first stream completes it will start working on the buffered notifications. 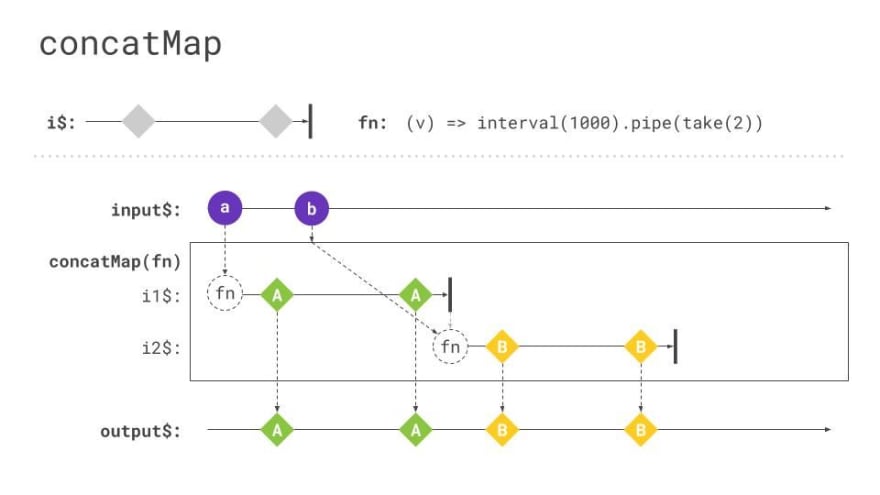 You can also explore the behavior of concatMap in the Stackblitz I linked above. You need to copy everything from the operators/concatMap.ts file over to index.ts. The code is pretty much the same as before, just instead that it is now using concatMap. What you will notice if you click furiously somewhere in the window, is that it will make HTTP calls for each click you made, but just one by one. And even more important, it waits for every HTTP call to complete before instantiating the next one.

MergeMap or flatMap (which is just an alias of mergeMap) is quite similar to concatMap, although it doesn't consider the order and it doesn't wait for the completion of one inner observable before subscribing to the next one. If we stick to the HTTP example, theoretically one could run into the situation where multiple HTTP requests are initiated inside the mergeMap function, if it doesn't wait for its completion, one could receive the response of the 2nd instantiated before the first one emits its response.

The following diagram displays the behavior quite well. Notifications of stream i2$ can be passed to the output$ stream, even though i1$ didn't completed yet. 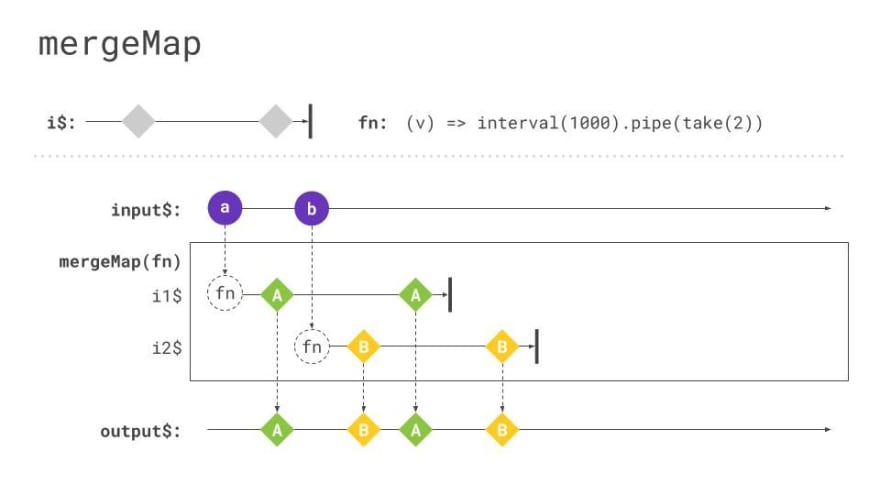 Again you can try out the behavior of mergeMap in the linked Stackblitz.

Do note, that mergeMap is definitely the wrong operator if the order of the notifications is important for you. If you need to process notifications sequentially, use concatMap!

Last but not least, exhaustMap. which is quite the opposite of switchMap. While switchMap is unsubscribing from the inner observable as soon as there is an incoming notification from the source observable, exhaustMap ignores those notifications completely, until the inner observable completes. This operator is the perfect match if you fear nervously clicking users crashing your application. But be aware that notifications in between aren't buffered, they are completely ignored. This behavior makes it different from concatMap, which will buffer those notifications.

The following marble diagram demonstrates this very well. Notification 'b' is completely ignored! It waits until i1$ completes. Afterwards, it will be triggered by the next notification from the source observable, which is c in the marble diagram below. 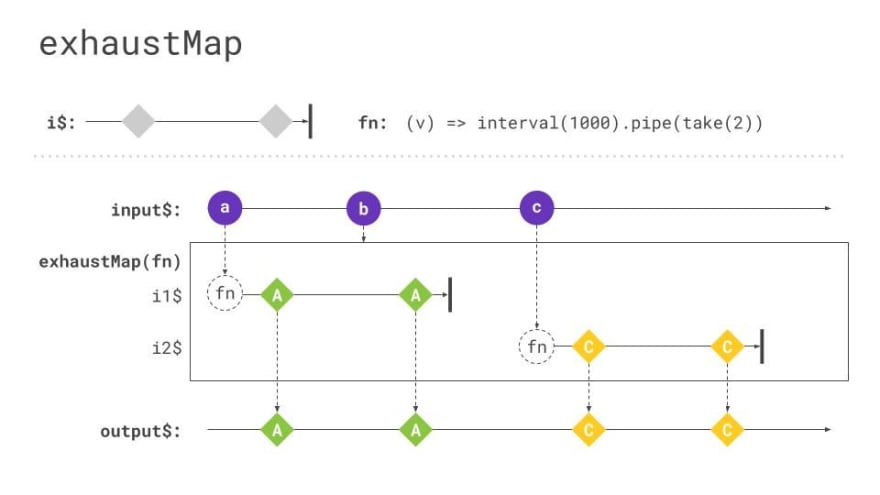 And again, you can play around with the behavior of exhaustMap in the linked Stackblitz. If you will do things like double and triple clicks, you will notice, that those are ignored as long as the HTTP request is ongoing. Afterwards, you can click again to retrigger an HTTP call.

The risks of using switchMap

Now that we know about all those fantastic operators, many of you might already have heard, that there might be some issues using switchMap. Let's figure out what this rumor is all about.

The problem with switchMap is that even though it cancels HTTP requests from a client perspective, the backend anyway "receives" those requests and may perform some actions. The problem with that is, that the backend anyway handles the requests and might perform mutation on the objects. This would result in having a different state on the client side than in the backend. For example, you are performing an account transaction in combination with switchMap. If you are initiating this multiple times, for the client it looks like it just happened once, but the backend receives multiple requests which leads to multiple transactions. And for sure no one wants to transfer money multiple times :D As long as you don't perform any mutation on the object instance on the server side or trigger any additional actions, you are good to go with switchMap. Fetching an object or polling objects is a totally valid use case for switchMap, but be aware of server-side actions or mutations!

Many thanks to everyone, who helped me writing this blog article.
Thanks to Todd Motto, Wes Grimes and Brian Troncone for reviewing the article and providing very valuable feedback. Additionally, I want to thank Michael Hladky for providing those marvelous marble diagrams!

Once unpublished, this post will become invisible to the public and only accessible to Jan-Niklas Wortmann.

Thanks for keeping DEV Community safe. Here is what you can do to flag rxjs: