Note: This article is for technical folks ranging from beginner to intermediate level. so if you are already aware of a particular topic, please feel free to check the Table of Content ⏩

Real-time communication has taken a great pace in shaping the world of the internet. In the post COVID era, every type of communication has changed, right from sending emails and waiting for your client's response to interacting with them on Slack communities.

This instant messaging, video/audio calls, and other similar technologies have gradually helped us to improve with time management and reduced the overall response time.

These innovations have become possible just because of WebSockets 🔌.

In this article, we will go through some amazing concepts of WebSockets and how APIs are implemented for fluent real-time communication.

✔ What is a WebSocket?

WebSocket is a transport layer protocol that provides a persistent connection between client and server. This WebSocket operates over a TCP/IP socket connection and provides a full-duplex and bidirectional functionality for the communication.

E.g., Let's assume we want to create a wired connection where two-person want to communicate with each other (ie. A wants to talk with B). Now, to start the conversation it becomes mandatory for one end(A) to have a dial-in number (acts as handshake) for connecting to the other end(B). 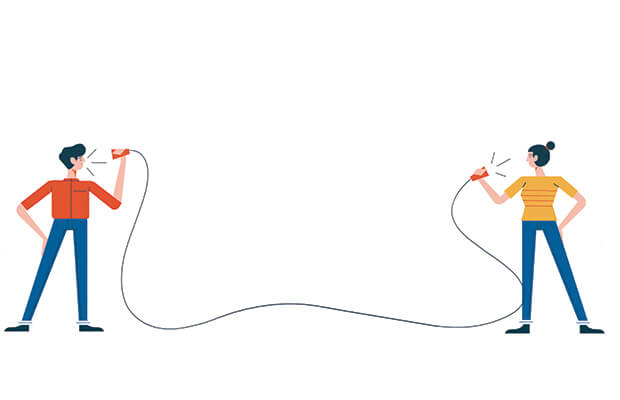 Here, once (assuming) A has successfully dialed to B, then a persistent connection will be established between A and B just like a tunnel where the information can flow from both ends.

Messaging applications work the same as the wired connection we discussed above where a connection is created and the sequence of messages is exchanged with great speed.

Can't these messages be sent using REST APIs? Why do developers prefer switching to WebSockets? Is there some issue with REST APIs?

Well, no worries! Let's dig up more and understand why WebSocket was introduced when there were REST APIs?

Now, let's get back to our messaging application where two people chat using APIs. Since HTTP APIs are unidirectional the client and server have to act both respectively and make continuous to and fro connections to get response data (relay messages from A to B and vice versa). These connections are tedious to handle.

To avoid this messy connection, there comes a concept of long polling. This long polling acts as a workaround for the above scenario where a client can send an HTTP request with a long timeout period and the server can keep pushing data back to the client.

Since this is just a workaround, you can expect some drawbacks as well, i.e. long polling works perfectly when the client and server are having continuous data transfer, but the problem arises when there is no data available to send back to the client. The server unnecessarily holds the resources throughout the length of the poll (timeout).

To overcome the above limitation of HTTP-based Technology, *WebSockets was born*.

The resources are unnecessarily tied up to the server throughout the length of the poll in HTTP., On the other hand, WebSocket allows communicating over the network freely. This communication is quite similar to UDP but with the security of TCP.

✔ Lifecycle of a WebSocket

WebSocket follows RFC 6455 - protocol where it asks for an opening handshake followed by a basic message framing, layered over TCP. 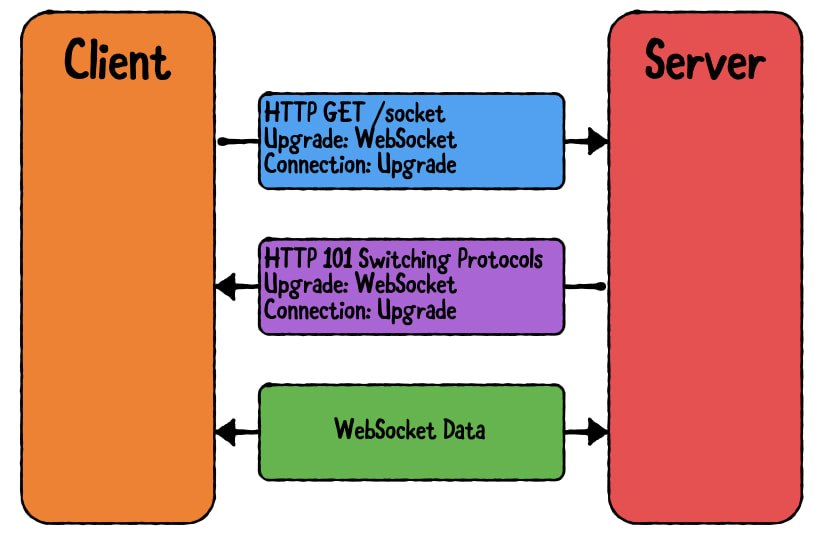 WebSockets begin their life cycle by initiating a standard HTTP request and response as shown in the image above. Within this request, the client asks servers to open a web connection. If the server agrees, then an initial handshake is established successfully.

This handshake is a piece of evidence that the client and server have agreed to share the TCP/IP socket for communication as a WebSocket connection. Now the information can flow using basic message framing protocol. To close the socket both ends should acknowledge for turning down the TCP connection.

I hope by this time you might have understood why WebSockets are used instead of REST APIs.

WebSockets URIs are the same as HTTP URIs but the only difference you can find is the scheme. WebSockets don't use an HTTP/HTTPS scheme; instead it uses ws/wss (web socket secure) to connect with the hosts/endpoints. E.g.

Let us understand each header that is required to establish a WebSocket connection.

The HTTP 101 Switching Protocols response indicates that the server is switching to the protocol that the client requested in its Upgrade request header. In addition, the server must include HTTP headers that validate the connection was successfully upgraded.

WebSocket API allows creating a bidirectional, full-duplex persistent connection that helps two applications to interact with each other fluently.

This can be visualized as a tunnel where data can be sent and received constantly without waiting for each other's response.

In this article, we began with the introduction of WebSockets and learned how WebSockets are used behind the scenes while building Real-time applications to make our life faster and simpler.

Next, we went through some technical concepts of the WebSocket protocol. Also, we compare how WebSockets are different from HTTP-based technology with some real-life examples.

As we end this article, you should have a clear understanding of WebSockets and how they can be used in your future applications.

Please leave your feedback and doubts in the comments below! 😃

Once suspended, sahuvikramp will not be able to comment or publish posts until their suspension is removed.

Once unsuspended, sahuvikramp will be able to comment and publish posts again.

Once unpublished, all posts by sahuvikramp will become hidden and only accessible to themselves.

If sahuvikramp is not suspended, they can still re-publish their posts from their dashboard.

Once unpublished, this post will become invisible to the public and only accessible to Vikram Sahu .

Thanks for keeping DEV Community 👩‍💻👨‍💻 safe. Here is what you can do to flag sahuvikramp:

Unflagging sahuvikramp will restore default visibility to their posts.