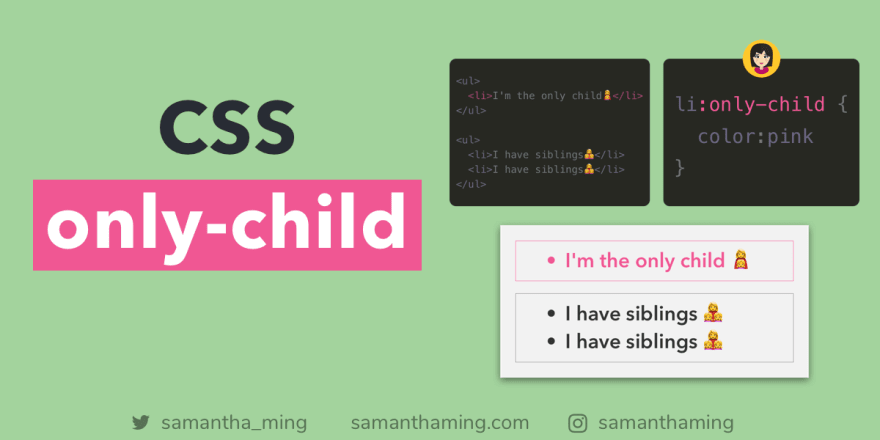 We have first-child, last-child, and nth-child. What if you're the only child. Not everyone has siblings, you know! No worries, CSS got you covered 🤗. If you want to style an element that has no siblings, use the :only-child pseudo-class selector 👩‍👧

Alternatively, you can also achieve this "only child" using the other child selectors

This will also select the only child.

So the difference between using the alternative solution and :nth-child is that our latter will have lower specificity.

If there are two or more conflicting CSS rules that point to the same element, the browser follows some rules to determine which one is most specific and therefore wins out.

Let's take a look at this example. Since only-child has lower specificity, the text color that will appear would be blue.

Let's start by explaining them individually:

:only-child only selects an element that is the ONLY child of a parent. That means only one element within that parent. Even if it's a different element type, it won't be considered an only child. One element, no exceptions!

:only-of-type only selects an element if that is the ONLY child of a particular type within a parent. So having other siblings of different types are fine.

Now that we have the explanation down. Let's take a look at some examples.

Here's an easy one. <p> is the only child of the parent <div> element, so this fits the criteria.

But now we have a problem. The parent, <div>, has 2 children. So if we were to use :only-child as our selector, nothing would be selected.

However, if we used :only-of-type, we're okay. Even though our parent, <div>, has 2 children. <p> still remains to be the ONLY child of that particular type. In this case, our <p> is the only type of our children. So it satisfies the criteria of being the only type, hence it is selected.

Here are some other similar CSS pseudo-classes

I covered :first-child and :first-of-type in my previous code notes, scroll down near the end to read it 🤓

It's also quite well supported, including Internet Explorer!

Want to also include this update. It's in the Working Draft of CSS Selectors Level 4.

Matching elements are not required to have a parent.

So does it mean an only child can exist without a parent element 🤔 I don't really know the details of this 😅. But if you know what this is about, leave it in the comments so I can learn more. You know what they say, sharing is caring 🤗

@yoann_buzenet: Why would we use only-child instead of first-child? Don't they do the same thing?

@cancrexo: well, first-child not always is the only child 😉

@yoann_buzenet: Yes but if there is only one child, first-child will work too, that’s what I don't get?

@cancrexo: Yes, but it will apply to all :first-child, regardless if it has more elements 😊