Another short one! Let's talk about the two HTML helper methods, Element.matches and Element.closest. Both of these methods are supported in modern, evergreen browsers. 💚

These are both just nice helper methods that make your life writing HTML/JS easier! 🌈

The first, .matches, is a way to check if an element matches a selector. Selectors are .foo, #bar, or form[method="POST"], just like you'd use in querySelector or a CSS rule.

This is just a simpler way to check a condition. For instance, we can replace all these methods with a more generic equivalent:

In addition, we can write more complex queries in a single request. How would I match a button[type="foo"].green? I can simply pass that whole string to el.matches! 🤯

The second method, .closest, is a practical extension of .matches. Instead of checking just the current element, it checks itself and all parent elements- until it finds one that does match. 🆙

This is very useful when you're adding an event handler to a group of buttons or elements. Here's an example: 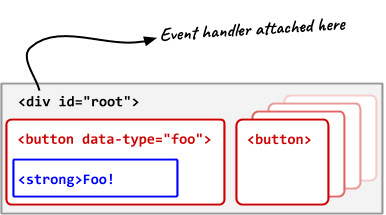 To find out what button we actually clicked on- because perhaps the click was on an inner element (such as the <strong> above), our event handler might look like this:

For me, I'll often set attributes like data-name or data-type so I can do something programatically with each button or thing that's under your root. 🌲👍

That's all for today! Hope you've learned something.