This series of articles is an in-depth snapshot of the current state of testing React components and frontend in general, explaining many whys, not just hows. We’ll discuss why to write automated tests, what tests to write and how to write them. In practical articles we’ll learn how to use Jest, Enzyme and React Testing Library to test React components.

I wrote a similar article three years ago, and now I look at it like at a handbook of bad practices. Almost everything I was recommending back then, I don’t do anymore.

This is the first article in a series, where we learn why test automation is useful, which types of tests to write, and testing best practices.

Subscribe to know about the second and the third articles.

There are many reasons why automated tests are useful but my favorite reason is: you’re already testing.

For example, you’re adding a new button to a page. Then you open this page in a browser and click this button to check whether it works — this is a manual test. By automating this process you can be sure that features that used to work will always work as they should.

Automated tests are especially useful for rarely used features: we always test whether the button submits the form with all fields filled correctly, but we tend to forget to test that checkbox hidden in a modal and only used by the boss of your boss. Automated tests will make sure it still works.

Other reasons to automate tests are:

Confidence to change code: well-written tests allow you to refactor code with confidence that you’re not breaking anything, and without wasting time updating the tests.

Documentation: tests explain how code works and what’s the expected behavior. Tests, in comparison to any written documentation, are always up to date.

Bugs and regression prevention: by adding test cases for every bug, found in your app, you can be sure that these bugs will never come back. Writing tests will improve your understanding of the code and the requirements, you’ll critically look at your code and find issues that you’d miss otherwise.

Automated tests make it possible to catch bugs before you commit them to the repository, in comparison to manual testing where you find most of the bugs during testing or even in production.

The testing pyramid, introduced by Mike Cohn, is probably the most popular approach to software testing: 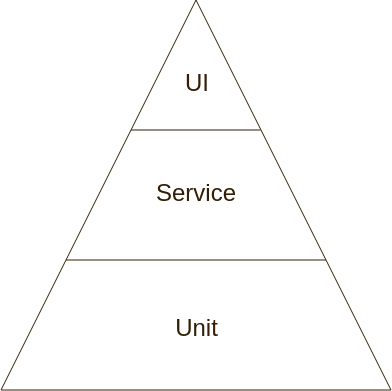 Unit tests are testing a single unit of code, like a function or a React component. You don’t need a browser or a database to run unit tests, so they are very fast. UI tests test the whole app loaded in a real browser, usually with a real database. This is the only way to ensure that all parts of your app work together, but they are slow, tricky to write and often flaky. Service tests are somewhere in the middle: they test integration of multiple units but without any UI.

This may work well on the backend, but on the frontend UI details often change without changing bigger user flows, which leads to failure of many unit tests. We spend a lot of time updating unit tests, but don’t have enough confidence that bigger features still work.

So maybe frontend needs a different approach to testing?

The testing trophy, introduced by Kent C. Dodds is getting popular for the frontend tests: 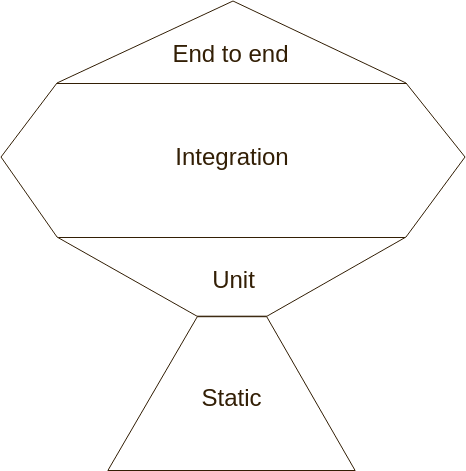 End-to-end tests in the trophy mostly correspond to UI tests in the pyramid. Integration tests verify big features or even whole pages but without any backend, a real database or a real browser. For example, render a login page, type a username and a password, click the “Log in” button and verify that the correct network request was sent, but without actually making any network requests — we’ll learn how to do it later.

Even if integration tests are more expensive to write, they have several benefits over unit tests:

The last point is important: integration tests give us the most confidence that our app works as expected. But it doesn’t mean, that we should only write integration tests. Other tests have their place but we should focus our efforts on tests, that are the most useful.

Now, let’s look closely at each testing trophy level, from the very bottom:

I think Prettier is a testing tool too because it often makes wrong code look weird, so you start questioning your code, read it carefully and find a bug.

Other kinds of tests may be useful for your project too.

Imagine, you have a subscription form component: an email input and a submit button, and you want to test that, when the user submits a form, a success message appears:

There are several issues with this test:

The first problem is called false negative: a test is failing even when the behavior stays the same. Such tests make refactoring very hard, you never know if a test is failing because you break something or because the test is bad.

The second problem is called false positive: a test is passing even when the code is broken. Such tests don’t give you any confidence that the code is actually doing something useful for the user.

Let’s rewrite our test and fix both problems:

Good tests verify that the external behavior is correct but don’t know any implementation details.

Tests should be deterministic

A non-deterministic test is a test that sometimes passes and sometimes doesn’t.

Some possible reasons are:

There are many ways to deal with non-deterministic tests, like polling, fake timers or mocks. We’ll look into several examples later in the article.

Good tests are deterministic, they don’t depend on the environment.

The first expectation is unnecessary: if the pizza isn’t defined, the second expectation will fail anyway. And error messages in Jest are good enough to understand what’s happening.

If we know that the error message inside the error modal is visible, we can be sure that the modal itself is visible too. So we can safely remove the first test.

Good tests don’t have any unnecessary expectations or test cases.

Complete test coverage sounds like a great idea in theory but doesn’t really work in practice.

There are a few problems with striving to high test coverage:

In my experience 100% test coverage is useful in two cases:

Good tests are easy to maintain and give you the confidence to change your code.

We’ve covered the most important theory and best practices of writing frontend tests:

Now we’re ready to start writing our own tests. Next two articles in these series are forks of each other, so feel free to read the one you’re interested in, whether it’s Enzyme or React Testing Library. If you’re still choosing, both article has pros and cons of each library listed at the very beginning: this will help you to make a choice.

Interaction to Next Paint

How to create a blog website with React & firebase -> Series

Once suspended, sapegin will not be able to comment or publish posts until their suspension is removed.

Once unsuspended, sapegin will be able to comment and publish posts again.

Once unpublished, all posts by sapegin will become hidden and only accessible to themselves.

If sapegin is not suspended, they can still re-publish their posts from their dashboard.