Hope you are doing fine in your life. I wanted to share some interesting insights I had after watching the 3x+1 problem on Veritasium last week:-

The rules of the series are as follows:- 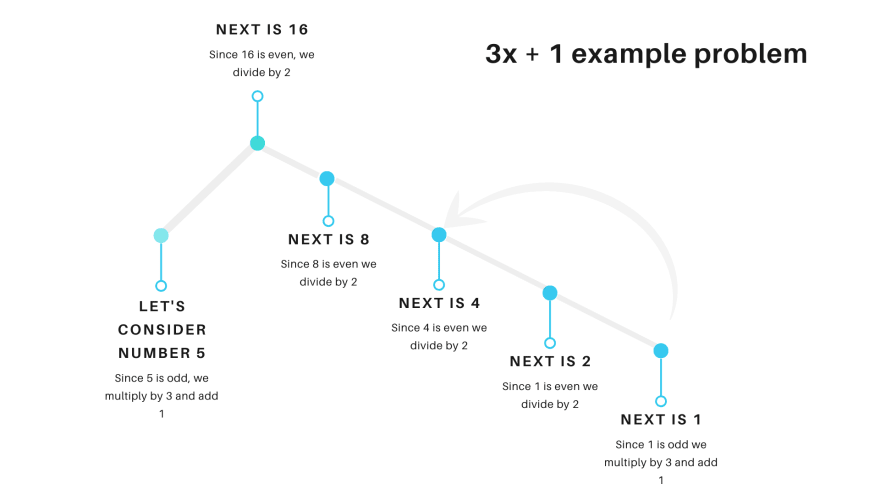 Although the explanation is surprisingly easy to follow from the Youtube video above, no one has been able to prove the series yet.

The problem in itself is really interesting to watch, but I personally found the practical examples and visualisations used in explaining the problem quite fascinating.

Therefore I wanted to see if I can replicate a few of the visualisations of the series which is popularly known as collatz conjecture using react.js this week. I was successful in building a basic graph of the first 10 numbers in the series as shown below:

You can directly check out the code for this graph here on Codesandbox:-
3x+1 in React.js

There is a utility function in the code to generate the series for a particular number:-

We then use this function in seriesGeneration component to create series for the first 10 numbers. The numbers are then visualised using recharts library.

I am planning to build a few more visualisations on the same number series, so stay tuned for upcoming articles.

Once suspended, saurabhnative will not be able to comment or publish posts until their suspension is removed.

Once unsuspended, saurabhnative will be able to comment and publish posts again.

Once unpublished, all posts by saurabhnative will become hidden and only accessible to themselves.

If saurabhnative is not suspended, they can still re-publish their posts from their dashboard.

Once unpublished, this post will become invisible to the public and only accessible to Saurabh Mhatre.

Thanks for keeping DEV Community 👩‍💻👨‍💻 safe. Here is what you can do to flag saurabhnative:

Unflagging saurabhnative will restore default visibility to their posts.