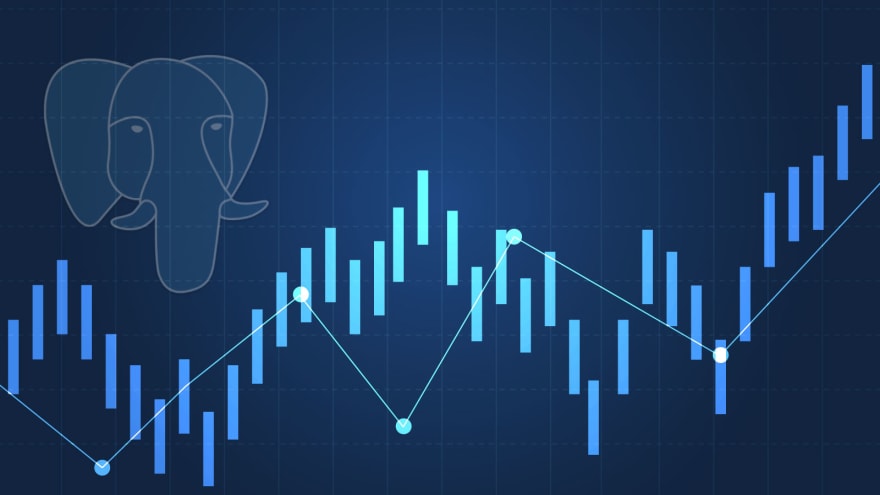 PostgreSQL is an open source object-relational database system that has soared in popularity over the past 30 years from its active, loyal, and growing community. For the 2nd year in a row, PostgreSQL has kept the title of #1 fastest growing database in the world according to the DBMS of the Year report by the experts at DB-Engines. So what makes PostgreSQL so special, and how is it being used today? We found the answers at the Postgres Conference in March where we surveyed PostgreSQL users, contributors, and SQL and NoSQL database administrators alike. In this free PostgreSQL Trends Report, we break down PostgreSQL hosting use across public cloud vs. private cloud vs. hybrid cloud, most popular cloud providers, migration trends, database combinations with Postgres, and why PostgreSQL is preferred over popular RDBMS alternatives.

So, how are PostgreSQL users choosing to host the clusters that power their applications? 59.6% of our respondents are hosting PostgreSQL in on-premise private clouds, where only 34.8% are using public clouds. These results are pretty on-par with a 2017 survey by the Uptime Institute which found that 65% of enterprise workloads were still running in data centers owned and operated by those enterprises.

We were, however, surprised to find that only 5.6% of respondents have adopted a hybrid cloud strategy. Hybrid cloud is a mix of both third party public clouds and on-premise private clouds to support your workload needs leveraged across these two computing environments. A recent report by RightScale found that 69% of businesses have adopted a hybrid cloud strategy by combining both public clouds and private clouds. 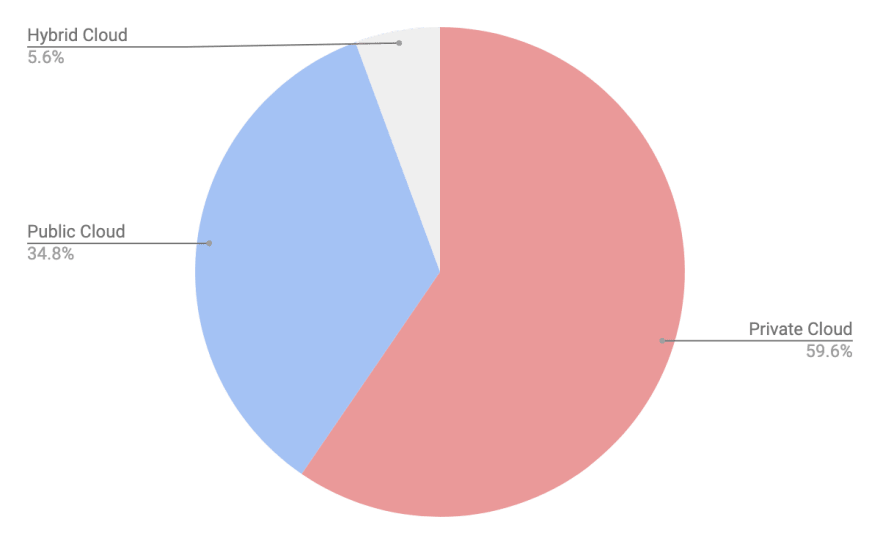 Most Popular Cloud Providers For PostgreSQL

With nearly 40% of PostgreSQL users hosting in public or hybrid clouds, we dove into the most popular cloud providers leveraged by these organizations to host their clusters. In a predictable discovery, we found that Amazon Web Services (AWS) claimed the majority at 55% of use for all PostgreSQL hosting activities in a public cloud environment.

Microsoft Azure and Google Cloud Platform tied neck and neck at 17.5% each amongst PostgreSQL public cloud users. The remaining 10% in our Others category was comprised by DigitalOcean, IBM Cloud, Rackspace, and Alibaba. 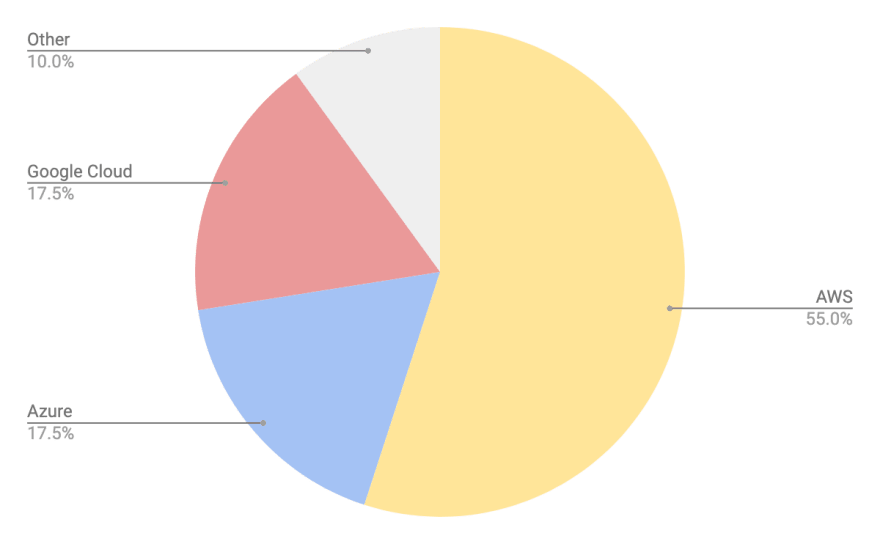 Many PostgreSQL deployments are also hosted and managed through Database-as-a-Service (DBaaS) solutions that leverage or are offered by these cloud providers, and you can check out this Compare PostgreSQL Providers page to see the advantages of each.

Single Cloud vs. Multi-Cloud Use For PostgreSQL

Now that we know the breakdown of both PostgreSQL hosting strategies and most popularly used cloud providers, let's take a look at single vs. multi-cloud use.

PostgreSQL users hosting in public clouds use, on average, 1.3 different cloud providers to power their applications. Single cloud use dominated with over three fourths of the responses at 78.1%, while only 21.9% of PostgreSQL deployments were leveraging a multi-cloud strategy. 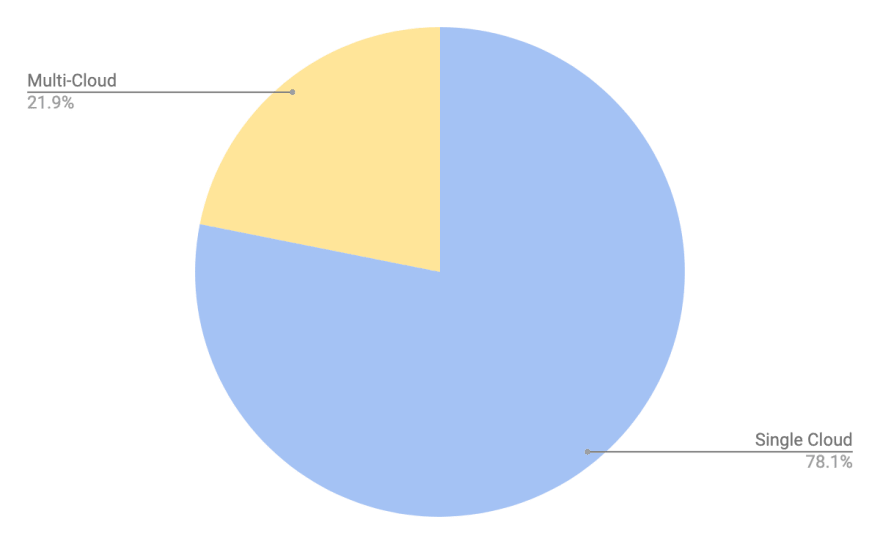 Next, we asked our respondents about their PostgreSQL use to understand the extent of the user, if they are in the migration process, or are there to explore whether it's a good fit for their application needs.

Being at the PostgresConf, we were not surprised to find a majority of respondents were already using and PostgreSQL at 74.4%. With over one fourth of respondents not yet deploying PostgreSQL in production, we found that 11.5% were in the process of migrating to PostgreSQL and the last 14.1% exploring the database for a possible migration in the future. Check out the Top Reasons Why PostgreSQL Is Used Over Another RDBMS analysis below to learn the advantages that solidified the decision for other PostgreSQL users. 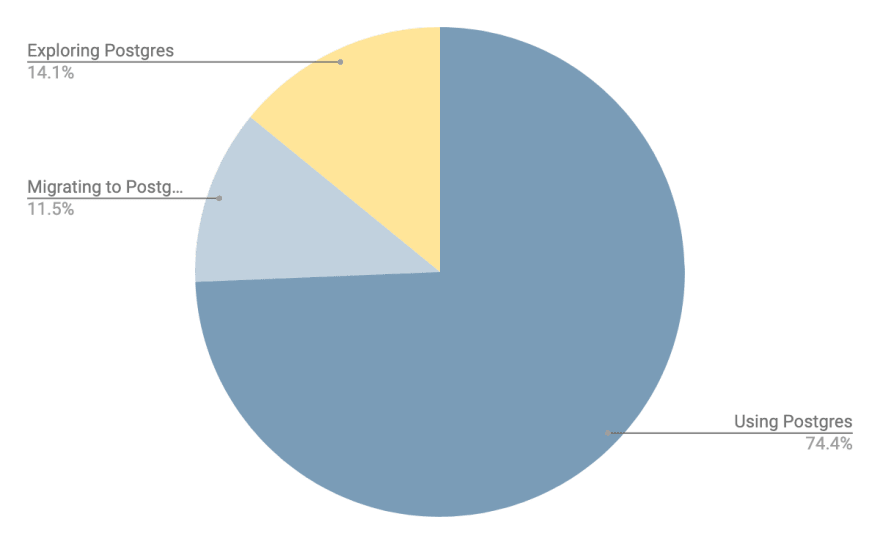 Most Popular Databases in 2019

While we were learning about the PostgreSQL adoption and migration trends, we also wanted to understand the popularity of database alternatives leveraged within this Postgres gathering. 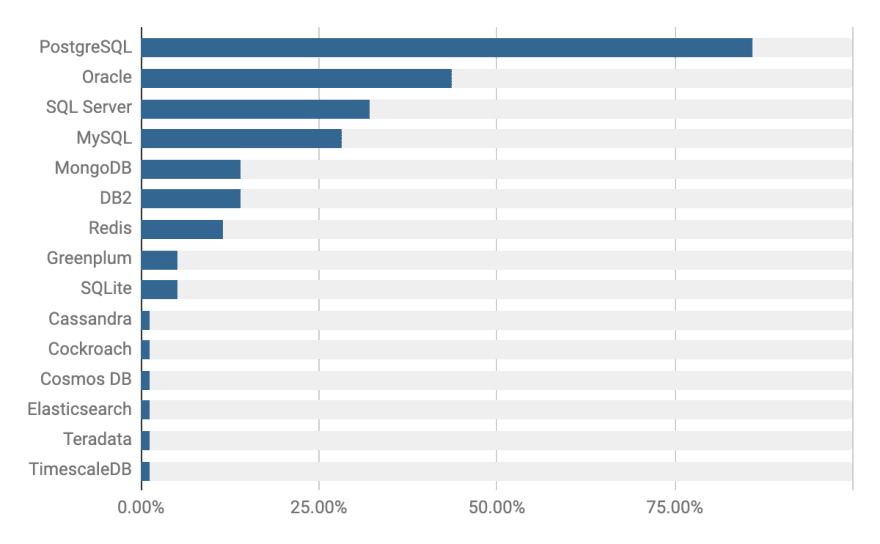 While the above result is highly biased towards PostgreSQL, we did find that this database to be in the top three in our 2019 Database Trends – SQL vs. NoSQL, Top Databases, Single vs. Multiple Database Use report published at the beginning of March. This survey was taken at DeveloperWeek where we connected with users of all database types, and found that MySQL held a strong lead with 38.9% of responses, followed by MongoDB at 24.6%. 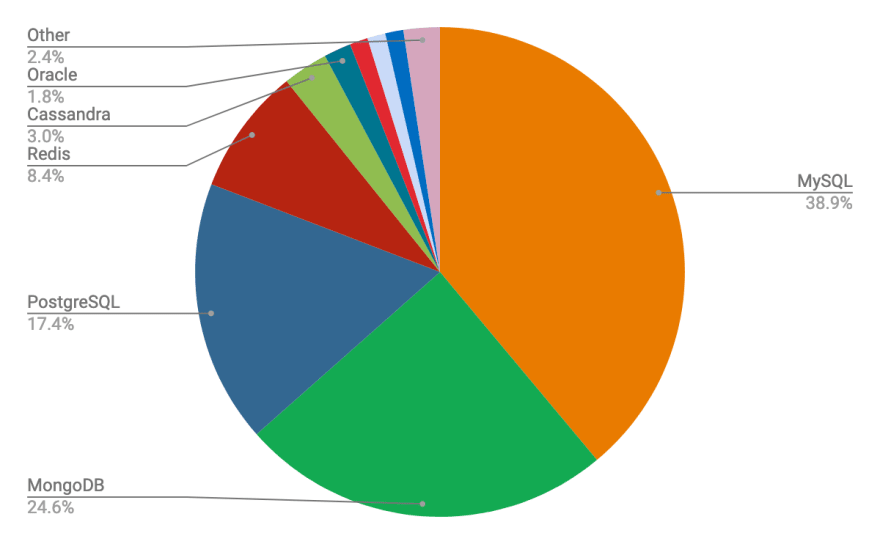 Most Popular Database Combinations with PostgreSQL

Now that we know which DBMS are most popular (in the PostgreSQL community and overall), let's take a look at the most popular database combinations used with PostgreSQL.

First, I'll start by sharing that 62.69% of PostgreSQL users are using at least one other database in addition to PostgreSQL, while 37.31% are using PostgreSQL as the sole database for their application.

Over one quarter of the PostgreSQL users at 27.3% are using Oracle in addition to PostgreSQL, followed by 20.9% using SQL Server, 17.3% using MySQL, 10.0% using MongoDB, 9.1% using DB2, 7.3% using Redis, and 3.6% also using SQLite. The last 4.5% of databases used with PostgreSQL include Cassandra, Cockroach, Cosmos DB, Elasticsearch, and Teradata. 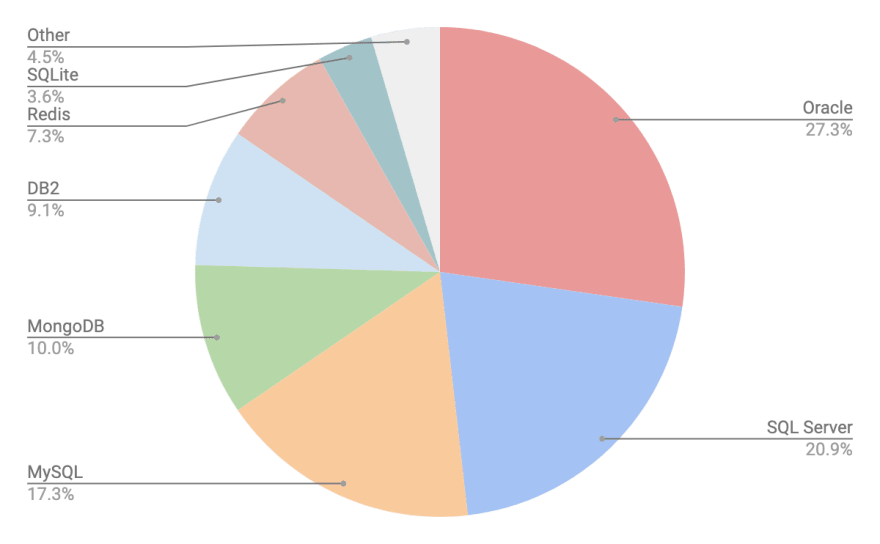 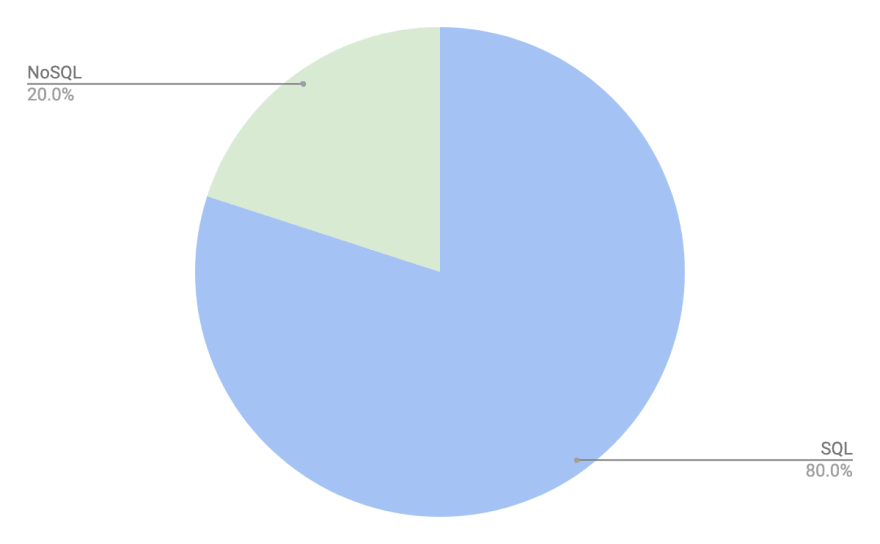 Now that we know which databases are most commonly used with PostgreSQL, let's dive into the average number of databases used in the PostgreSQL community to support their applications.

On average, we found that deployments that leverage PostgreSQL use 2.56 different database systems, including PostgreSQL itself. This was over 17% lower than what we found in our 2019 Database Trends Report where database users of all types reported an average of 3 databases used in combination. PostgreSQL must be filling the gaps where other databases are required without.

As you can see below, over half of the PostgreSQL users are leverage two or more databases, at 9.0% for 2 databases, 14.1% for 3 databases, 17.9% for 4 databases, 11.5% for 5 databases, and a shocking 3.8% for 6 databases used to power a single application. While combinations won the majority, PostgreSQL as a standalone database was the largest of responses at 43.6% from our survey. 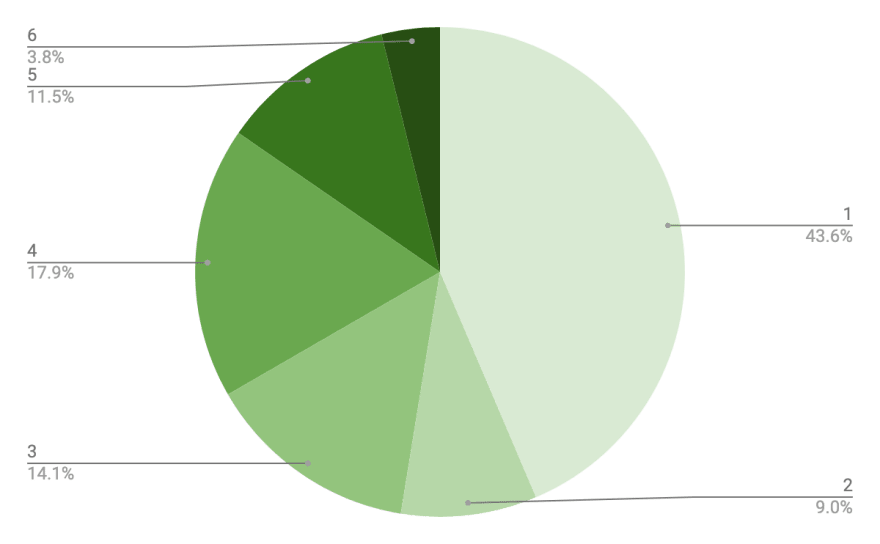 Top Reasons Why PostgreSQL Is Used Over Another RDBMS

We have finally come to the last trend analysis in our report where we break down our open-ended question of "what made you decide to use or explore PostgreSQL over another RDBMS". 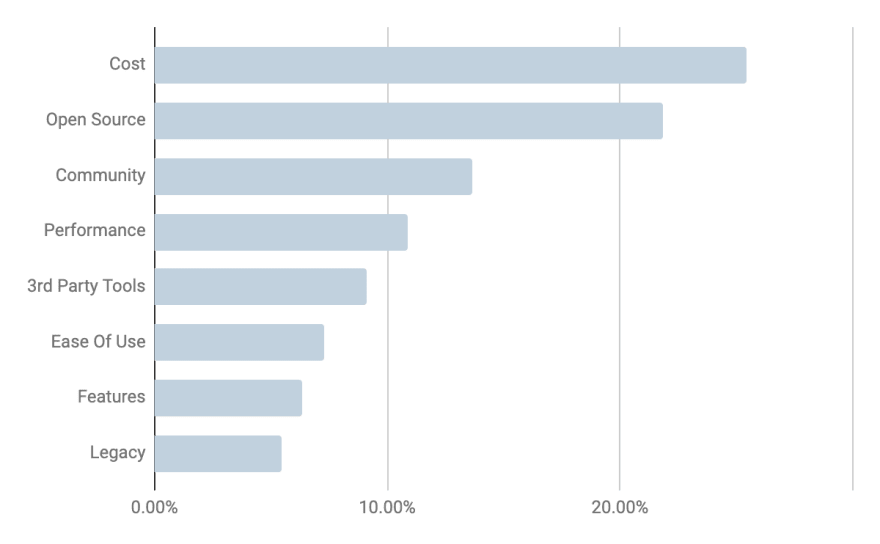 Cost was the number one reason why PostgreSQL is preferred over another RDBMS, coming in at 25.5%. This ties almost directly into the second highest reported reason being open source at 21.8%, as commercial vendor licensing costs are driving their users towards more free, open-source systems. As you can see in the DB-Engines Popularity of Open Source DBMS vs. Commercial DBMS report below, open source has been steadily stealing market share from commercial vendors since at least 2013. While commercial still remains on top, open source is trending towards a majority within the next 12 to 18 months.

Community then came in third place with 13.6% of responses, though with one of the most active and engaged open source DBMS communities of all time, it was clear from the conversations around the survey that this holds more weight with its users. PostgreSQL is entirely community-driven with free support from developers around the world who share their expertise with their fellow users.

Performance followed in fourth with 10.9% of responses, then 3rd party tools at 9.1% which placed well as they are often leveraged to ensure and maintain high performance for PostgreSQL. Again, open source community for another PostgreSQL win as there are hundreds of third party open source (and some commercial) tools available to leverage easily for your deployments. You can learn more about some of the open source solutions in our Managing High Availability in PostgreSQL 3-part series.

Ease of use came in at sixth with 7.3% by PostgreSQL respondents for its simple and flexible design, and their advanced feature set at seventh with 6.4%. Last but not least was legacy at 5.5% in eight, where these respondents came into their positions at companies that were already using PostgreSQL, and quickly fell in love with it after experiencing all that was outlined above.

If you enjoyed the 2019 PostgreSQL Trends Report, you'll want to check out our previous survey analysis of this database, Latest PostgreSQL Trends: Most Time-Consuming Tasks & Important Metrics to Track. You can also visit our PostgreSQL on Azure and PostgreSQL on AWS pages to learn more about automating your deployment management, monitoring, and maintenance in the cloud.

RepliByte - an open-source tool to synchronize PostgreSQL in multiple environments

Securing your Load Balancer with CloudFront