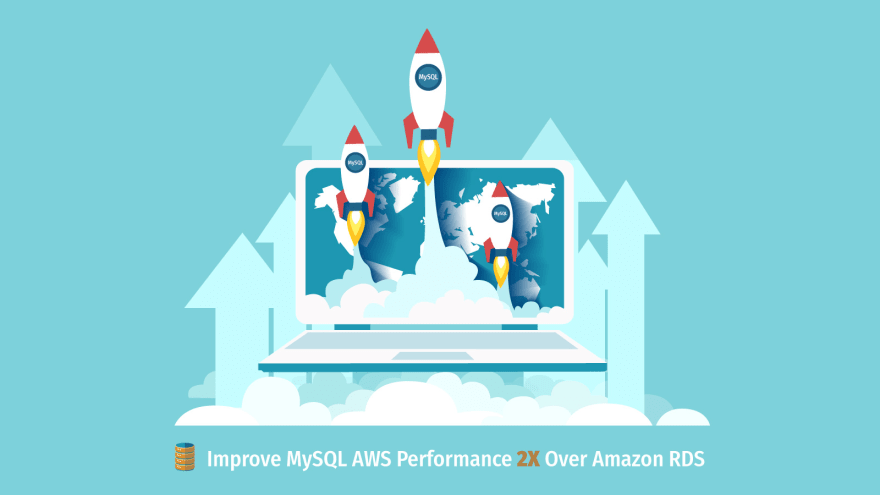 AWS is the #1 cloud provider for open-source database hosting, and the go-to cloud for MySQL deployments. As organizations continue to migrate to the cloud, it’s important to get in front of performance issues, such as high latency, low throughput, and replication lag with higher distances between your users and cloud infrastructure. While many AWS users default to their managed database solution, Amazon RDS, there are alternatives available that can improve your MySQL performance on AWS through advanced customization options and unlimited EC2 instance type support. ScaleGrid offers a compelling alternative to hosting MySQL on AWS that offers better performance, more control, and no cloud vendor lock-in and the same price as Amazon RDS. In this post, we compare the performance of MySQL Amazon RDS vs. MySQL Hosting at ScaleGrid on AWS High Performance instances.

ScaleGrid’s MySQL on AWS High Performance deployment can provide 2x-3x the throughput at half the latency of Amazon RDS for MySQL with their added advantage of having 2 read replicas as compared to 1 in RDS.

As you can see from the above table, MySQL RDS pricing is within $10 of ScaleGrid’s fully managed MySQL hosting solution.

The ScaleGrid MySQL on AWS High Performance replica set uses a hybrid of local SSD and EBS disk to achieve both high performance and high reliability. A typical configuration is deployed using a 3-node replica set:

What does this mean? Since the Master and the Slave-1 are running on local SSD, you get the best possible disk performance from your AWS machines. No more network-based EBS, just blazing-fast local SSD. Reads and writes to your Primary, and even reads from Slave-1 will work at SSD speed. Slave-2 uses an EBS data disk, and you can configure the amount of IOPS required for your cluster. This configuration provides complete safety for your data, even in the event you lose the local SSD disks.

A similar MySQL configuration is used on both ScaleGrid and RDS deployments:

To ensure we provide informative results for all MySQL AWS workload types, we have broken down our tests into these three scenarios so you can evaluate based on your read/write workload intensity:

Each scenario is run with varying number of sysbench client threads ranging from 50 to 400, and each test is run for a duration of 10 minutes. We measure throughput in terms of Queries Per Second (QPS) and 95th Percentile latency, and ensure that the max replication lag on the slaves does not cross 30s. For some of the tests on the ScaleGrid deployment, MySQL configuration binlog_group_commit_sync_delay is tuned so that the slave replication lag does not go beyond 30s. This technique is referred to as ‘slowing down the master to speed up the slaves’ and is explained in J-F Gagne’s blog.

As we can see from the read-intensive workload tests, ScaleGrid high performance MySQL instances on AWS are able to consistently handle around 27,800 QPS anywhere from 50 up to 400 threads. This is almost a 200% increase over MySQL RDS performance which averages only 9,411 QPS across the same range of threads.

ScaleGrid also maintains 53% lower latency on average throughout the entire MySQL AWS performance tests. Both Amazon RDS and ScaleGrid latency increase steadily as the number of threads grows, where ScaleGrid maxes out at 383ms for 400 threads while Amazon RDS is at 831ms at the same level.

In our balanced workload performance tests, ScaleGrid’s MySQL High Performance deployment on AWS outperforms again with an average of 20,605 QPS on threads ranging from 50 to 400. Amazon RDS only averaged 8,296 for the same thread count, resulting in a 148% improvement with ScaleGrid.

In our final write-intensive MySQL AWS workload scenario, ScaleGrid achieved significantly higher throughput performance with an average of 17,007 QPS over the range of 50 to 400 threads. This is a 123% improvement over Amazon RDS who only achieved 7,638 QPS over the same number of threads.

The 95th percentile latency tests also produced significantly lower latency for ScaleGrid at an average of 114ms over 50 to 400 threads. Amazon RDS achieved an average of 247ms in their latency tests, resulting in a 54% average reduction in latency when deploying ScaleGrid’s High Performance MySQL on AWS services over Amazon RDS.

ScaleGrid ‘High Performance’ deployment can provide 2x-3x the throughput at half the latency of RDS with an added advantage of having 2 read replicas as compared to 1 in RDS. To learn more about ScaleGrid's MySQL hosting advantages over Amazon RDS for MySQL, check out our Compare MySQL Providers page or start a free 30-day trial to explore the fully managed DBaaS platform.

Staking ETH on your Own Node