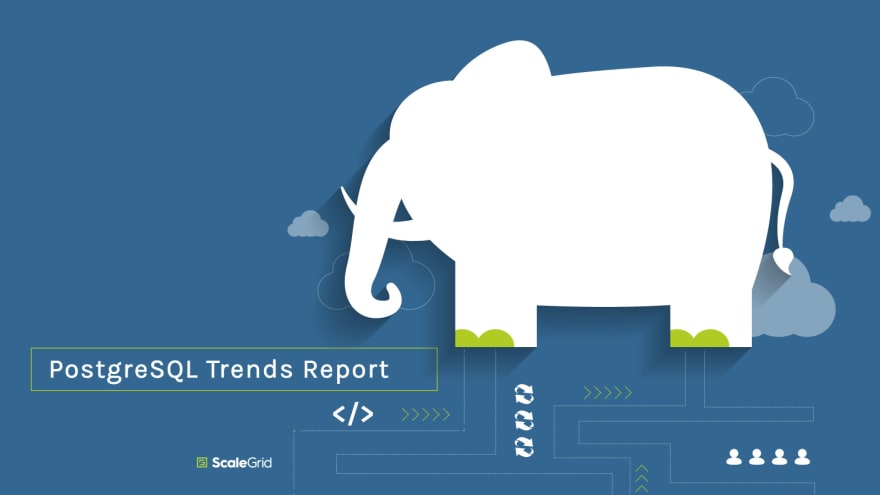 PostgreSQL popularity is skyrocketing in the enterprise space. As this open source database continues to pull new users from expensive commercial database management systems like Oracle, DB2 and SQL Server, organizations are adopting new approaches and evolving their own to maintain the exceptional performance of their SQL deployments. We recently attended the PostgresConf event in San Jose to hear from the most active PostgreSQL user base on their database management strategies. In this latest PostgreSQL trends report, we analyze the most popular cloud providers for PostgreSQL, VACUUM strategies, query management strategies, and on-premises vs. public cloud use being leveraged by enterprise organizations.

AWS was not the only cloud provider to grow - we found that 19.4% of PostgreSQL cloud deployments were hosted through Google Cloud Platform (GCP), growing 11% from April where they only averaged 17.5% of PostgreSQL hosting. This leaves our last cloud provider - Microsoft Azure, who represented 3.2% of PostgreSQL cloud deployments in this survey. This is one of the most shocking discoveries, as Azure was tied for second with GCP back in April, and is commonly a popular choice for enterprise organizations leveraging the Microsoft suite of services. 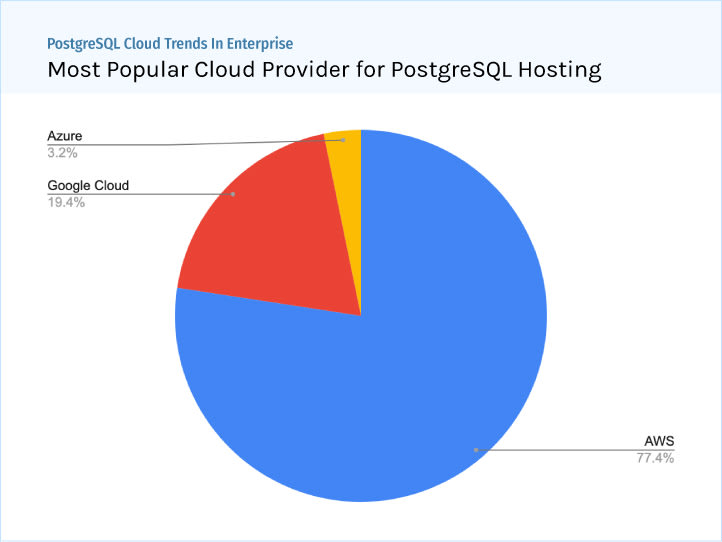 Most Used Languages with PostgreSQL

This is a new analysis we surveyed to see which languages are most popularly used with PostgreSQL. The supported programming languages for PostgreSQL include .Net, C, C++, Delphi, Java, JavaScript (Node.js), Perl, PHP, Python and Tcl, but PostgreSQL can support many server-side procedural languages through its available extensions.

We found that Java is the most popular programming language for PostgreSQL, being leveraged by 31.1% of enterprise organizations on average. PostgreSQL can be easily connected with Java programs through the popular open source PostgreSQL Java Database Connectivity (JBDC) Driver, also known as PgJDBC.

The programming language C came in third place, averaging 20.0% use with PostgreSQL, followed by Go in fourth at 13.3%, PL/pgSQL in fifth at 11.1%, Ruby in sixth at 8.9% and both PHP and Perl in seventh at 4.4%. PHP was actually the most popular language used with PostgreSQL in 2013, representing almost half of the responses from their survey at 47.1% use. The last column, Other, was represented by C++, Node.js, Javascript, Spark, Swift, Kotlin, Typescript, C#, Scala, R, .NET, Rust and Haskell. 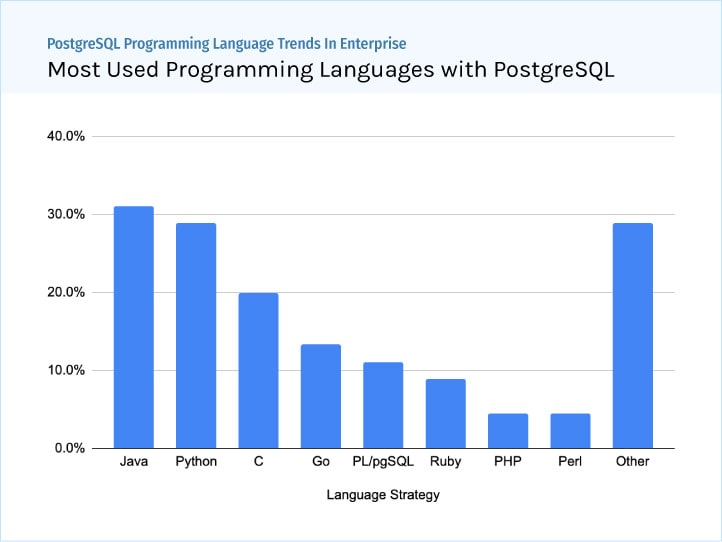 PostgreSQL VACUUM is a technique to remove tuples that have been deleted or are now obsolete from their table to reclaim storage occupied by those dead tuples, also known as Bloat. VACUUM is an important process to maintain, especially for frequently-updated tables before it starts affecting your PostgreSQL performance. In our survey, we asked enterprise PostgreSQL users how they are handling VACUUM to see what the most popular approaches are.

The most popular process for PostgreSQL VACUUM is the built-in autovacuum, being leveraged by 37.5% of enterprise organizations on average. The autovacuum daemon is optional, but highly recommended in the PostgreSQL community, at it automates both VACUUM and ANALYZE commands, continuously checking tables for deal tuples. While highly recommended, 33.3% of PostgreSQL users prefer to manually perform VACUUM in the enterprise space. Fibrevillage has a great article that outlines these common problems with autovacuum which may cause an organization to adopt a manual strategy: 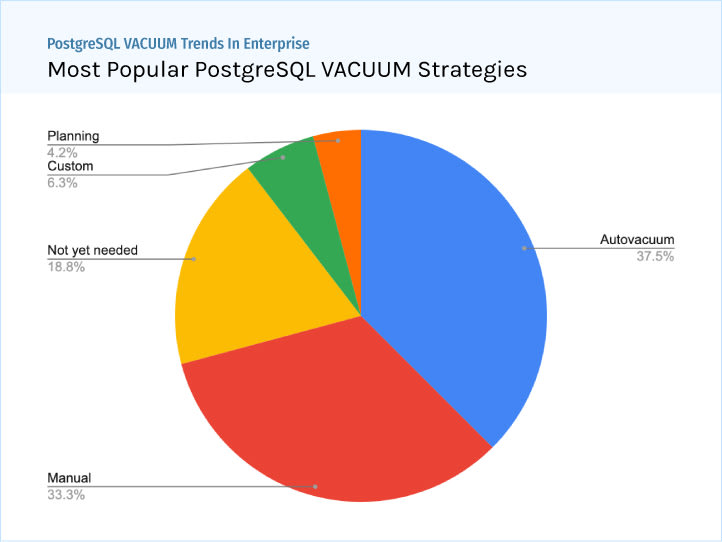 If you’re working with PostgreSQL, you likely know that managing queries is the #1 most time-consuming task. It’s a critical process with many aspects to consider, starting at developing a query plan to match your query structure with your data properties, to then analyzing slow-running queries, finally to optimizing those queries through performance tuning.

We found that 54.3% of PostgreSQL users are manually managing slow queries in enterprise organizations. This can be accomplished through their modules auto_explain and pg_stat_statements, checking pg_stat_activity for table and index activity on your server, analyzing the slow query log, or reviewing in your code.

On average, 21.7% of enterprise organizations are leveraging a monitoring tool to analyze and manage their PostgreSQL slow queries. This helps them significantly reduce the time it takes to identify which queries are running the slowest, most frequently, causing the most read or write load on your system, or queries missing an index by examining the rows. 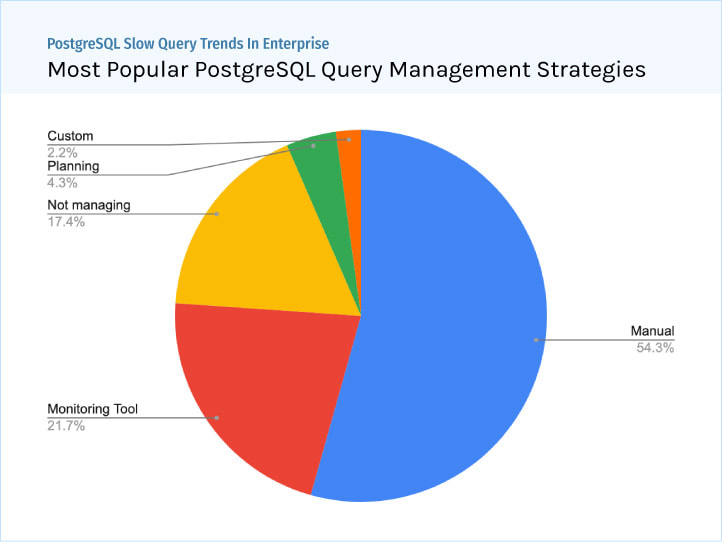 Let’s end with one of the hottest topics in the PostgreSQL enterprise space - whether to deploy PostgreSQL in the cloud or on-premises. We’ve been actively monitoring this trend all year, and found that 59.6% of PostgreSQL deployments were strictly on-premises back in April from our 2019 PostgreSQL Trends Report and 55.8% on-premises in our 2019 Open Source Database Report just a few months ago in June.

Hybrid cloud deployments are becoming more popular across the board - this recent report found that 57% of businesses opt for a hybrid cloud environment using both private and public clouds as places to store their data. While we see a large jump to the cloud, enterprise organizations are still leveraging on-premises environments in some capacity 60% of the time, compared to 65.2% in April. Lastly, we found that public cloud PostgreSQL deployments have grown 15% since April, now averaging 34.8% use by enterprise organizations. 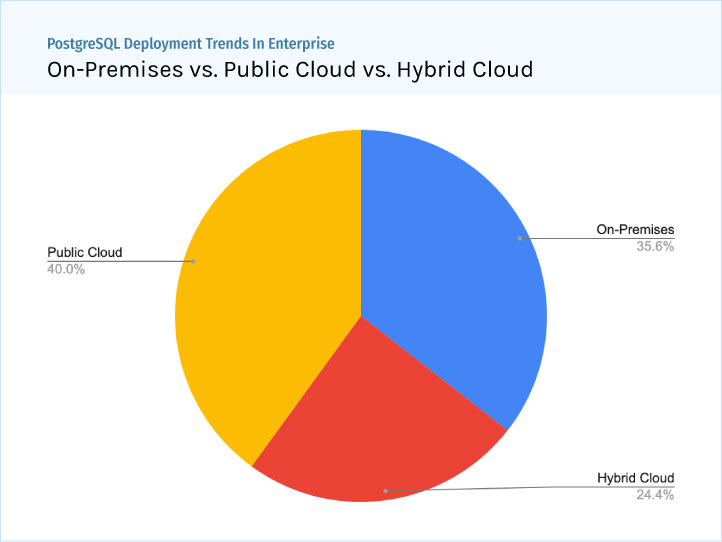 So, how do these results stack up to your PostgreSQL deployments and strategies? We’d love to hear your thoughts, leave a comment here or send us a tweet at @scalegridio.

hyper-scale multi-tenant for SaaS: an example with pgbench