Guess the language: easy-to-learn, concise and has the official status “ready for Android development”? Apparently, we’re talking about Kotlin. But let’s have a more precise look on it. Is Kotlin easier than Java?

For decades Java has been considered as a highly reputed, reliable and multipurpose programming language. But for the developers, Kotlin means not only lightweight and explicit code, null-safety, data classes, and coroutines but also writing less code, no runtime overhead and more safety. Whereas Java is slowly lagging behind in speed and safety which is crucial in modern mobile app development.

The second well-known argument refers to the compilation speed. Kotlin is known to compile slower than Java. However, let’s see how Kotlin processes small and big files compared to some other programming languages. Here are some benchmarks to see the big picture: 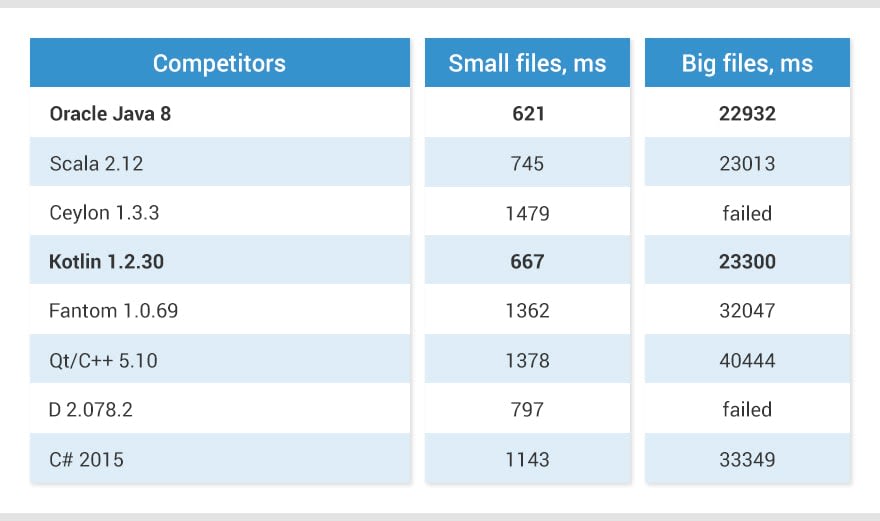 Literally, the developers prefer Kotlin for it’s easiness of coding and a way to make the application run almost as smooth as on Java.

Why to choose Kotlin?

Kotlin’s syntax is clean and intuitive while it includes all existing Java frameworks & libraries. It means fewer iterations during the development process, stable release version and no deadlines rescheduled.
Kotlin is open-source and fully supported by Google, its authority and its reputation. This means that the developed Android applications will surely work on any Android device by default and with no exceptions.
Benchmarks show imperceptible lags for Kotlin applications running on the end-side. It means a lightning blaze application, airy and error-free.

Both traditional banks and cutting-edge fintech companies choose Kotlin for its reliability and security. According to experts, the project price can be reduced by 20% by choosing Kotlin for the IoT development. It significantly simplifies and speeds up the development of an e-commerce app while reducing time-to-market.

Still not sure if Kotlin is for you?

Here are some online services that have already switched to Kotlin.

SCAND’s experienced team is keeping pace with the recent technology altercations and offers mobile app development using Kotlin as well as effective migration to Kotlin on Android. Feel free to contact us for more details or request.