Although I love React and am more used to single-page applications (SPA), I decided to leave them aside the time of a side project and to use plain old Node.js, Express, Pug, and MongoDB. And that felt good!

This article was first published on my blog.

Ok, a little context. I am a front-end developer, and React is my expertise. I created several SPAs with it in the last years, for work and side projects. I also worked with Node.js and Express a few years ago, so using them in a project today might feel like going backward for me.

Yet, I wanted to use Node.js and Express for my project, for one main reason: I wanted to make a minimum viable product very quickly. And I had the feeling that bootstrapping a web app with Node.js (including authentication, database access, etc.) takes way less time than with React. I wasn’t disappointed.

The result: in roughly a weekend of work, I had a first usable version of my project. A week later, I published it online, posted it on HackerNews, and got a few thousands of unique visitors. The project? A place to share and discover side projects: 🤘 My Side Project Rocks. 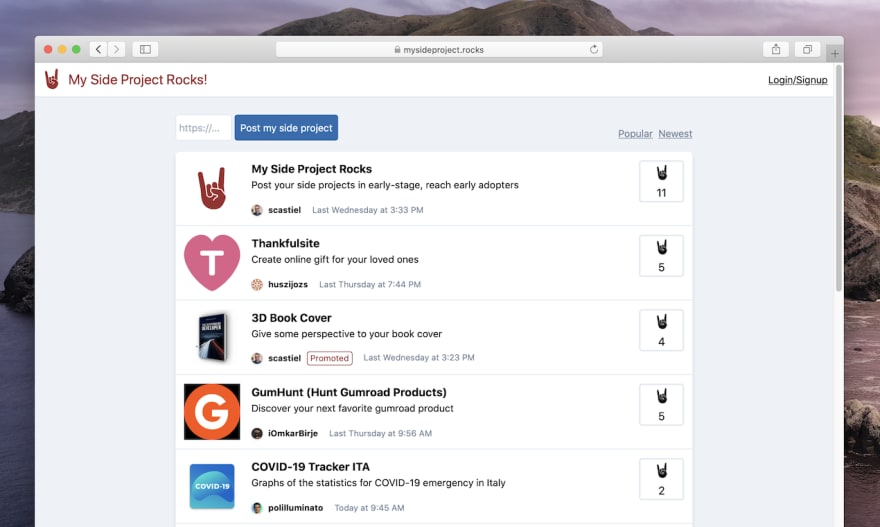 Ok for Node, but why not a more modern framework?

First I thought about using Hapi or Nest. Nest seemed a little too “backend” for me (remember, I’m a front-end developer, so I like light tools, although Nest is probably a good choice for a robust backend). Hapi seemed very cool, but after playing a little with it I remembered that my goal was to stay with tools I knew already. Plus, I wanted to delegate authentication to the great Auth0, and they provide a lib for Express, not for Hapi, which would have meant additional work for me.

So, Express, and what else?

So yes, my web app is a plain old Express application. I rediscovered how routes are created, how you can create middlewares to perform some checks or hydrate some data in the request object. It now feels dirty to me, and not very TypeScript-compliant (so after a short try, I just decided to keep JavaScript), but very efficient in term of effort spent.

To store the data, again I didn’t go very far and chose MongoDB. I created a free account on their cloud solution, perfect for development and early-stage projects (and way more convenient than installing a local database). Now I think maybe a relational database would be more relevant, but for an MVP, MongoDB does the job.

To generate the HTML content, I used the Pug template engine. I wasn’t used to its weird syntax anymore, but it came back quickly. I also discovered the TailwindCSS framework, which was the only new thing I accepted to learn for this project. I was very skeptical at first, but wow it is crazy! A small learning curve, but now writing plain old CSS feels so boring to me!

And no client-side JavaScript at all?

Almost none! The only JavaScript I have in the client is for basic features for which reloading the page would make the user experience painful:

It goes without saying, these features are quite simple to implement with vanilla JavaScript, so no React, and not even some transpilation. Just vanilla-JS.

Also, I used a tool a colleague told me about a few years ago: Turbolinks. A single script added to the page, and the browser will switch from a page to another without reloading the full page. Still seems kind of black magic to me, but it works very well.

Any problem with this architecture?

Most of what I wanted to do was easily doable with my Node/Express architecture. If you look inside, there is nothing very extraordinary, nothing that a developer who just learned Node wouldn’t be able to achieve.

I had some issues with very basic stuff though, probably because I haven’t built a non-SPA app in a long time. For instance: how can I display dates on the page with the user timezone settings? Unless the user signed in and set up his timezone, I can’t think of any clean way to do so. If you have some idea, please tell me 😅

What about the future of your web app?

Clearly, among the choices I made to prototype quickly, some are not the best choices if I want my app to scale (and it’s okay). For instance, most of the content doesn’t change often, so it would make sense to serve it from a CDN. Hosting a Node web app costs a few bucks a month where hosting a React app is basically free (I mean for a small project of course).

If I had to do it again, I would probably make the same choices. It was very nice, and I was very efficient, able to focus on the feature, and not the technical implementation details.

Now, the same web app could have been written with React and a bit of serverless. This is an architecture I’d like to have more experience in, so maybe for my next side project 😉

Once suspended, scastiel will not be able to comment or publish posts until their suspension is removed.

Once unsuspended, scastiel will be able to comment and publish posts again.

Once unpublished, all posts by scastiel will become hidden and only accessible to themselves.

If scastiel is not suspended, they can still re-publish their posts from their dashboard.

Once unpublished, this post will become invisible to the public and only accessible to Sébastien Castiel.

Thanks for keeping DEV Community 👩‍💻👨‍💻 safe. Here is what you can do to flag scastiel:

Unflagging scastiel will restore default visibility to their posts.